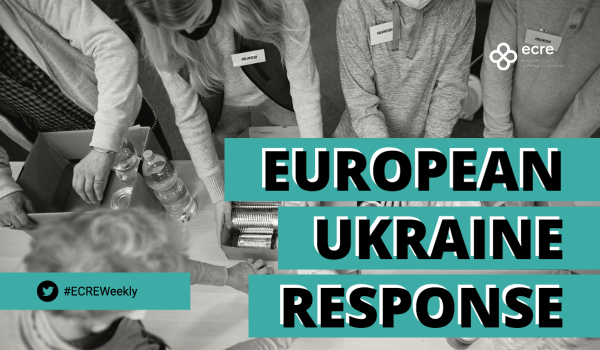 European states are grappling with the reception of more than 3 million people who have fled Ukraine. The Temporary Protection Directive (TPD), in force since 7 March, obliges EU states to offer a one-year (extendable) residence permit and ensuing rights to education, healthcare, work, and accommodation. On 18 March, the Commission published operational guidelines that advise member states on how the TPD should be implemented. Non-EU states not bound by the TPD are in some cases introducing parallel legislation. ECRE is publishing an information sheet (last updated 18 March) covering the measures taken by each country: practical challenges and numbers of arrivals are outlined below.

While Poland (as covered in this article) has received more than 1.9 million Ukrainian refugees, other European countries are facing significant arrivals. The neighbouring countries of Slovakia, Hungary and Romania have seen 234,738; 291,230 and 508,692 arrivals respectively. Access challenges have been reported at the border with Romania (a non-Schengen state), while Hungary has introduced tightened border controls. In Serbia – which borders Romania and Hungary – ECRE member the Asylum Protection Center is urging the government to introduce a temporary protection status that ensures Ukrainians’ rights to stay, as well as to access accommodation, health care, education and work. 2,000 Ukrainian refugees are currently in Serbia, where their visa free stay is limited to 90 days. Moldova – one of Europe’s poorest countries – has had 355,426 arrivals. Despite being mainly a stopover point for refugees, the country has come under pressure. According to Minister of Foreign Affairs Nicu Popescu, more than 100,000 people including 48,000 children remain in reception centres. Despite an unprecedented mobilisation of volunteers and the urgent establishment of temporary accommodation, capacity is overstretched. In response to a request for support from Moldova the EU signed a “status agreement” with Moldova on 17 March. This will allow the European Border and Coast Guard Agency (Frontex) to deploy staff to conduct border management tasks including registration and controls under Moldovan coordination. Austria, France, Germany and Norway are amongst the countries to have agreed to relocate refugees from Moldova.

Germany is a main destination for Ukrainian refugees (as covered in this week’s article), having registered somewhere between 175,000 or 160,000 as of 17 March. Benelux has also seen arrivals. In the Netherlands, ECRE member Dutch Council for Refugees (DCR) has warned of poor conditions for 7,000 non-Ukrainian asylum seekers and refugees stuck for months in emergency shelters – including tent camps, halls, boats, barracks and hotels. According to the organisation, capacity challenges will likely mean a rise in such solutions as Ukrainians are arriving. The Netherlands are expecting 50,000 Ukrainian refugees and authorities clarified on 16 March that families who volunteer to host people will not receive any compensation from the state. In Luxembourg 50 to 80 asylum seekers from Iraq, Syria, Afghanistan and several regions of Africa were evicted from a shelter in Kirchberg on short notice to make space for Ukrainian refugees. Belgium – where authorities are expecting 200,000 Ukrainians – has recently been the scene of a reception crisis and tensions are again on the rise. More than hundred asylum seekers, as well as third country nationals who resided in Ukraine prior to the Russian invasion – but have no Ukrainian passports -, are waiting for hours in front of the Brussels registration centre. Médecins du Monde highlights comparative shortcomings stating that, while the reception of Ukrainians has been quickly organised, the regular reception system remains mismanaged. Belgian authorities have opened a larger registration centre in Heysel to allow for a faster process for Ukrainians nationals: yet, videos of long queues at that location also quickly spread on social media. As of 17 March 10,000 Ukrainian refugees had been registered.

While the number of arrivals to Spain remains unclear and is likely much higher, the Minister of Inclusion, Social Security and Migration, José Luis Escrivá, confirmed on 17 March that around 4,500 Ukrainians had registered in the country. Hundreds of people had lined up on 11 March in a newly opened reception centre for Ukrainians in Madrid to receive papers, with the Ministry of the Interior stating temporary protection permits were processed rapidly. National and regional authorities have agreed to coordinate management of the reception of Ukrainian refugees and hubs have been announced in Madrid, Catalonia and Alicante. However, media speculate that friction over funding may intensify. In the first half of March, French media reported large scale arrivals with hundreds of people lining up daily at Gare de l’Est in Paris and by 16 March Interior Minister Gerald Darmanin said the number had reached 17,000. While thousands are expected to follow many are reportedly seeking transit to Spain to join the larger Ukrainian diaspora community there. Far-right leaders have advocated welcoming Ukrainians while keeping out asylum seekers from other regions. Vice-president of Eric Zemmour’s far-right party Reconquête, Nicolas Bay, has claimed that one third of people passing through Ukraine are from sub-Saharan Africa. However, according to the Interior Ministry, of the 10,007 people from Ukraine who arrived by 11 March, 9,761 or 97.5 per cent were Ukrainian nationals. By 16 March the Swiss reception system had registered almost 6,500 Ukrainian refugees. According to authorities 3,642 are housed in asylum centers and 2,840 are housed in private homes. Swiss Justice Minister Karin Keller-Sutter has warned that up to 60,000 Ukrainian refugees will arrive in Switzerland. As of 10 March, the non-EU country had only registered 1,624 arrivals, and was planning online registration in response to long queues at asylum centres.

The Scandinavian countries of Finland and Denmark have received criticism for their handling of Ukrainian arrivals. Finland received 3,300 asylum applications from Ukrainians by 12 March and has offered study places for 2,000. Yet, the Nordic state has been criticised by African and Middle Eastern asylum seekers for favouring Ukrainians over other groups in the asylum system. 2,300 asylum seekers in Finland are awaiting decisions with an average processing time of 10 months. On 10 March Denmark prevented the entry of 50 third country nationals arriving from Ukraine. Media have criticised the government’s double standard of welcoming Ukrainian nationals while actively working to return Syrians.