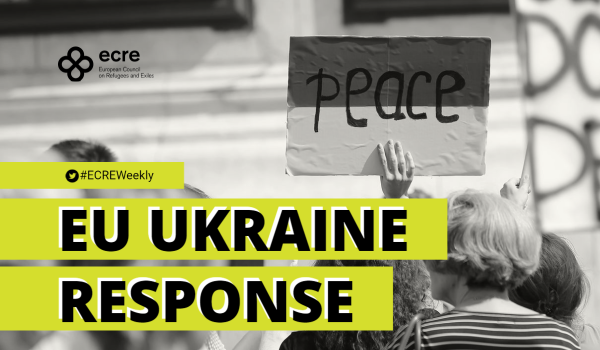 In response to an exodus from Ukraine that is predicted to be “Europe’s largest refugee crisis this century”, the EU has enacted legislation to provide immediate, temporary protection to refugees. Other measures taken include humanitarian aid packages, a Solidarity Platform, and greater flexibility for states to draw on EU funding. Further, new EU border management guidelines aim to enable the efficient management of arrivals and speed up support for vulnerable persons. Reports of discriminatory treatment against third country nationals fleeing Ukraine have been deplored by UN agencies and special rapporteurs.

Since the Russian invasion began on 24 February, nearly 2.5 million people had fled Ukraine by 11 March. To help address the concerning situation for civilians within the country, the EU has provided an immediate 85 million euro humanitarian funding package, and plans to spend another 240 million from the 2014-2020 budget. In parallel the bloc is delivering 100 million euro worth of supplies via the Union Civil Protection Mechanism (UCPM). While there remain difficulties getting aid into Ukraine, the UN Refugee Agency (UNHCR) and others remain active inside the country. Agreements have been made for Russia to open humanitarian corridors for people to leave Kyiv, Kharkiv, Sumy and Mariupol, several of which have fallen through. At least 35,000 civilians were evacuated from besieged Ukrainian cities on 9 March, President Volodymyr Zelensky said. A further 5,000 were evacuated a day earlier from Sumy.

According to the European Commission, a key challenge in assisting people fleeing has been congestion on the Ukrainian side of the border. The Commission reports that the EU and member states are working with the Ukrainian authorities to tackle bottlenecks caused by a lack of staff, IT shortcomings, and thousands of abandoned cars. To speed up procedures on the EU side of the border, the Union has issued operational guidelines encouraging member state flexibility with border controls. These allow for emergency support lanes to assist vulnerable people and streamlined procedures, including for customs. In its 8 March communique, the Commission emphasised that: “It is essential to ensure an orderly entry into the EU based on common standards, keeping the border open for people who have fled areas of armed conflict and may need access to the EU on humanitarian grounds or international protection.”

On 7 March, the EU decision to grant temporary protection to people fleeing Ukraine entered into force. This unprecedented move will provide immediate protection in the EU for Ukrainians and third country nationals with refugee or permanent residence status in Ukraine. The protection allowing access to schools, healthcare, housing and work runs for one year but may be extended. The scope of application was narrowed slightly in comparison to the first draft, which would have automatically applied temporary protection to all third country nationals unable to return home (as well as stateless persons). Nonetheless, the final version requires states to apply either temporary protection or another relevant national status to these persons. The legislation also clarifies that member states can go “above and beyond” this scope, for instance with complementary national protection schemes. The move was welcomed by UNHCR, who urged member states to take an “inclusive approach” by granting temporary status to all those fleeing. Days earlier, the bulk of MEPs supported a resolution calling for the provision of immediate protection to Ukrainians and for equal responsibility sharing in the EU.

The EU has also stepped up financial support to member states. Funding from the Border Management and Visa Instrument is being offered to assist with identification of arrivals, as well as first reception and medical care. The Commission has additionally proposed new flexibility to allow 2014-2020 cohesion to be spent by member states on supporting refugees “in finding jobs, starting or continuing education, and accessing childcare”. The Fund for European Aid to the Most Deprived will also be mobilized to ensure food and basic material assistance. While not part of the EU, Moldova has received 5 million euro and will receive a further 15 million due to the large number of refugees it is hosting.

On 3 March, ECRE called on the EU to respond to the urgent situation in Ukraine with humanitarian aid, streamlined border access, a clear legal status for those forced to flee, solidarity mechanisms to share reception needs, emergency funding and support from EU agencies. The measures undertaken by the EU so far broadly align with these priorities. Nonetheless, ECRE stresses that states must continue and expand their preparations to improve reception capacity and conditions. Speaking on a European Policy Centre panel last week, ECRE director Catherine Woollard highlighted the emerging challenge of shifting from an immediate, humanitarian measures to a more long-term response focused on access to public services and integration support. As of 11 March, the only state to request support from an EU agency was Romania, who called for a Frontex deployment. The EU Asylum Agency (EUAA) have 130 experts on stand-by to assist with screening, registration, information provision and asylum processing if requested by states.

In the first days of the conflict, more than 100,000 of those fleeing the warzone were non-Ukrainians. Media reports have circulated of racist and xenophobic treatment against non-white people attempting to flee the country. A Human Rights Watch report published on 4 March documents various instances of black and Asian people being prevented from boarding trains, being pulled off trains, or being told “all blacks have to get off the bus”. UNHCR state they are “aware of challenges faced by some third country nationals seeking to enter Poland” and have appealed for access to the territory to be maintained for all groups. The International Organization for Migration, the UN Special Rapporteur on Migrants, the Special Rapporteur on Racism, and the UN Working Group on People of African Descent have all condemned the “verified” reports of racism. Further, there are logistical challenges preventing the escape of some international students from Ukraine.