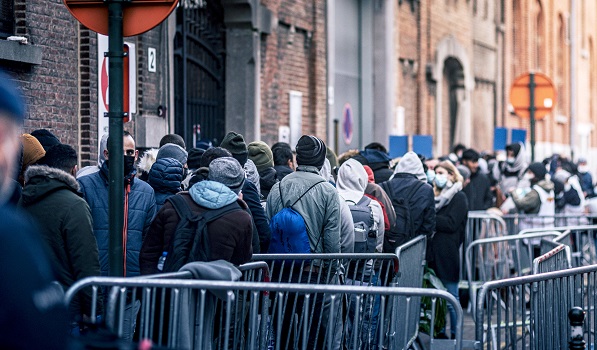 Belgian authorities have been convicted for failing to uphold the rights of thousands of asylum seekers during a reception crisis late last year. A Vietnamese smuggler deemed responsible for the death by suffocation of 39 men, women and children in a lorry three years ago has been sentenced to 15 years in prison.

Between October and December 2021, thousands of people were left to sleep rough and denied access to an asylum procedure during reception accommodation shortage in Belgium. ECRE member Flemish Refugee Action estimated in November that “more than 2,000 people, mostly single men” were left in the cold outside the Petit-Château reception centre in Brussels. Multiple protests were held outside the office of the asylum minister, and an online petition was launched.

In mid-November, a dozen organisations supporting asylum seekers took the Belgian state to court for failure to respect the right to seek asylum (as only the very few who were given reception places were able to lodge an asylum request) and to ensure reception conditions in line with EU and domestic law. On 19 January, the court of first instance in Brussels convicted the state and the national asylum agency (Fedasil) stating: “it has been sufficiently demonstrated that persons who were unable to make their application for international protection have repeatedly spent the night outside, in freezing temperatures and without any care or attention from the competent authorities, so that the violation of the right to a life with dignity prima facie has become established”. The court ordered Fedasil to pay 5,000 euro for each working day that at least one person was unable to make an application for international protection. Sotieta Ngo, head of the NGO Coordination et Initiatives pour les Réfugiés et les Étrangers (Ciré) said this could reach a total of one million euro, an amount that “should motivate them to respect their commitments”. Flemish Refugee Action stated: “we hope that the Belgian government and Fedasil understand the gravity of the situation and that they will finally fulfill their obligation to respect the fundamental rights of asylum seekers”. The other organisations bringing the legal challenge included Médecins Sans Frontières Belgique, Médecins du Monde, La Ligue des Droits Humains, ADDE (Association pour le droit des étrangers), Ordre des Barreaux francophones et germanophones, and BelRefugees Plateforme Citoyenne.

Though local refugee aid organisations welcomed the ruling, they highlight that reception “crises” have become predictable, even routine, despite the fact that “fluctuations in the number of persons seeking protection are inherent in migration”. According to Flemish Refugee Action, the government nonetheless ignored repeated NGO warnings that the reception network is saturated. The court emphasised that authorities cannot rely on excuses of unpreparedness and unpredictability, saying: “It is up to the Belgian State to provide the appropriate structures to deal with increases in the number of requests which, as such, are not extraordinary and are recurring”. In mid-December, the European Asylum Support Office (EASO) now transformed into EU Asylum Agency (EUAA) announced 100 staff would be deployed to Belgium to provide reception support and capacity building. According to Ciré, between many people were still sleeping rough as of the third week of January.

The leader of a human smuggling gang has been sentenced for the death of nearly 40 people in the UK after they were transported in sealed trailer across the Channel from the port of Zeebrugge. The 39 people died from suffocation and hyperthermia after paying nearly 30,000 euro to be transported to the UK in October 2019. The case was tried in Belgium where the smuggling network was based, with a safe house in Anderlecht. Belgian, Vietnamese, French and British police were involved in the investigation, which ended with the sentencing of a 45 year-old Vietnamese man on 19 January.  The man, deemed to be “indisputably the leader of the Belgian cell of the criminal organization”, was sentenced to 15 years in Belgian jail and fined 900,000 euro. 17 others were handed sentences ranging from 18 months to 10 years.