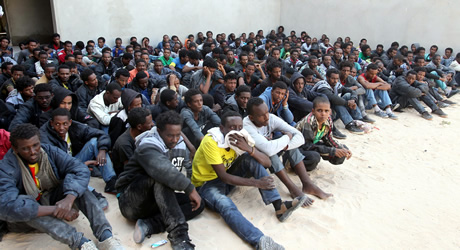 The Office of the UN High Commissioner for Human Rights (OHCHR) and the UN mission in Libya (UNSMIL) published their report “Detained and Dehumanised” this week highlighting human rights abuses that migrants and refugees face in Libya. The report proposes policy recommendations to the Libyan and EU governments.

The report concludes that many migrants in Libya suffer human rights abuses such as arbitrary detention and inhumane conditions of detention, torture, other ill-treatment as well as unlawful killings and sexual exploitation. Many are arbitrarily held in detention centres run mostly by the government Department for Combatting Illegal Migration (DCIM). In these centres, conditions are inhumane as they are overcrowded, lack access to toilet or washing facilities, food and clean water and detainees are exposed to physical violence, humiliations and extortion from guards. Further, the report finds that groups pledging alliance to ISIL frequently abduct and abuse individuals. Finally, men believed to be from the Libyan Coast Guard are reported to have carried out life-threatening interceptions during search and rescue operations. UN High Commissioner Zeid Ra’ad Al Hussein stated, “The list of violations and abuses faced by migrants in Libya is as long as it is horrific.”

UNSML and OCHR urge the Libyan government to address the human rights violation of migrants by ending arbitrary detention of all migrants, to immediately release migrants in the most vulnerable positions, to reduce the number of detention centres and to facilitate the work of UNHCR and IOM in the country. In the medium term they propose to decriminalize irregular migration and ensure the ratification of the 1951 Refugee Convention, 1967 Protocol and the adoption of national asylum law.

At this week’s European Council the importance of cooperation with Libyan Coast Guards in the framework if EUNAVFOR MED Operation Sophia was reaffirmed.   . Human Rights Watch Middle East and North Africa Director, Sarah Leah Whitson stressed “The UN has made clear that Libyan authorities should end the torture, forced labor, and sexual violence that has been the lot of detained migrants for years. The partners in Libya’s policies toward migrants, including the EU, should insist on nothing less.”