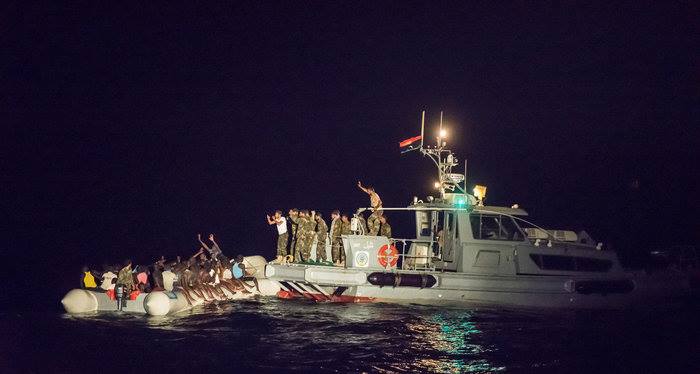 The allegation that the Libyan Coast Guard violently assaulted a vessel transporting asylum seekers raises strong concerns about the EU’s collaboration with the Libyan navy, which commenced last week as part of the EU’s Operation Sophia.

German NGO Sea Watch reported  that during a rescue operation two weeks ago, a rubber dinghy carrying 150 – 160 people was attacked by the Libyan Coast Guard.  According to Sea Watch, coast guards were seen hitting migrants and causing the deflation of the vessel. The attack led to the drowning of approximately 30 people. While Sea Watch published pictures of the incident, the Libyan Coast Guard merely confirmed its presence at the scene but denied the alleged attack.  After the attack, Sea Watch spokesperson Ruben Neugebauer said, “Next week training starts with the Libyan coastguard. We think it’s quite important to think about with whom we are collaborating.

”The training will start in the framework of Operation Sophia which was launched in June last year as an EU military mission with the objective of “disrupt[ing] the business model of human smugglers and traffickers” in the Central Mediterranean.  In June this year, the Operation’s mandate was reinforced to include the training of the Libyan Coast Guard and Navy. The training, with the objective of enhancing the coast guard’s ability to disrupt smuggling and trafficking as well as to perform search and rescue operations, begun last week.

The decision to continue the training despite the attack was criticised by ProAsyl. The organization condemned the EU’s cooperation, saying that the EU hereby becomes an accomplice to the breaches of human rights committed by the Libyan Coast Guard.