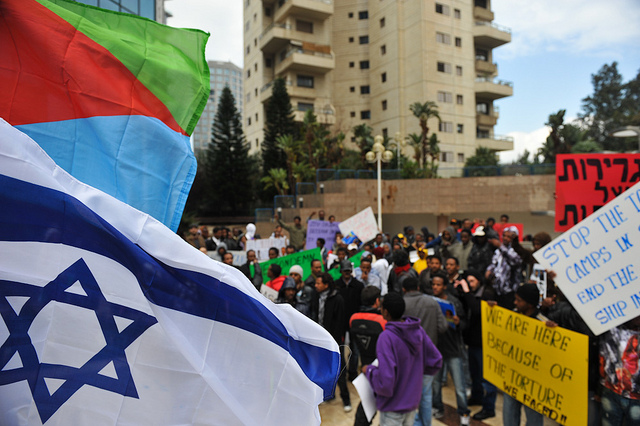 The Israeli government’s controversial plan to initiate the forced deportation of Eritrean and Sudanese asylum seekers has been delayed, while hundreds of those affected remain detained in Israeli prisons over the Passover holiday weekend.

The delay was announced after mass protests last week, during which 25,000 people took to the streets of Tel Aviv to denounce the policy of ordering asylum seekers to leave Israel for unnamed destination in Africa in exchange for €2,800 and a plane ticket. Those who refuse deportation are detained indefinitely in Saharonim prison.

The deportations were due to begin this week, but on 15 March Israel’s Supreme Court temporarily issued an injunction blocking the controversial plan after a legal challenge from groups opposed to the deportations. The Israeli government stated it was unable to meet the 26 March deadline as it needed more time to respond to the court’s request for clarification of the policy.

On Tuesday, the High Court of Justice agreed to the government’s request for an extension on the court’s order for a brief outlining the state’s deportation policy and related issues, now due for submission on 9 April. The government also said that it would submit classified documents as part of its filing, which are believed to include information on the African nation that will receive the deported migrants and asylum seekers, widely reported to be Rwanda or Uganda.

In recent weeks, several legal cases have taken aim at Israel’s mass deportation plan. Following a court ruling that desertion from the Eritrean army may constitute grounds for refugee status, those Eritreans currently held in Saharonim Prison whose asylum applications were denied could have their claims reexamined. Another recent ruling could potentially lead to a large number of Sudanese asylum seekers, who fled genocide in the Nuba region, having their claims reexamined.

As criticism of the policy grows both within Israel and beyond, pressure is mounting on the government to come up with an alternative solution. Amnesty International described Israel’s policy on Monday as ‘an abdication of [Israel]’s responsibility to refugees and an example of the vicious political measures feeding the “global refugee crisis”’.