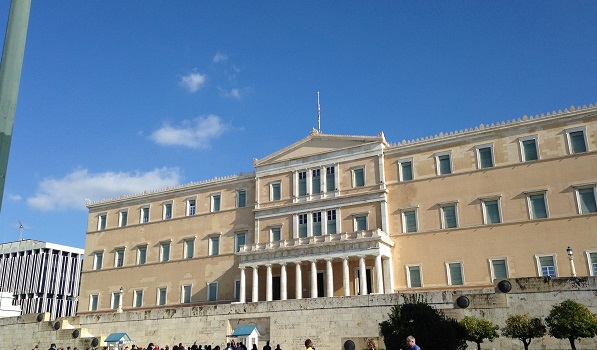 Forensic evidence suggests that shots causing several injured and one dead at the Greek Turkish border on March 4, were fired from the Greek side of the border. Push-backs to Turkey from mainland detention facilities are reported. Hundreds of people transferred from the overcrowded Moria camp on Lesbos to the Greek mainland met with violent protests. Following the controversial International Protection Act (IPA) the Parliament is expected to approve a new bill with amendments to the law.

The shooting with live ammunition left one dead and several injured at the Greek Turkish border on March 4 when people trying to cross into Greece were confronted by Greek border guards. Forensic evidence gathered by Forensic Architecture, Bellingcat, Lighthouse Reports and SPIEGEL released on May 8, now suggest that fatal shots were fired from the Greek side of the border. Tineke Strik MEP for the Greens/EFA and member of the Civil Liberties, Justice and Home Affairs Committee (LIBE) states: “This investigation shows that Greek border guards fired upon innocent people and that simply cannot go unanswered. Using violence against people who are seeking help is not only a brutal violation of fundamental rights, but it is also the very antithesis of what the EU is about”.

BVMN has released “first hand testimony and photographic evidence indicating the existence of violent collective expulsions” including robbery, beatings with the use of batons and tasers, and stripping of cloth. Within six weeks the network has collected reports of 194 people removed and pushed back into Turkey from the camp in Diavata and the Drama Paranesti pre-removal detention centre. Although BVMN considers push-backs from Greece to Turkey a regular occurrence the network states that: “rarely have groups been removed from inner city camps halfway across the territory or at such a scale from inland detention spaces”. Further, Greek media are reporting of the alleged push-back by sea of fourteen people who arrived on Chios on April 30.

In the first major transfer since March 20, 249 people from the overcrowded Moria camp on Lesbos arrived by ferry to the Greek mainland on March 4. The group was transferred by bus to facilities on the mainland facing local protests upon arrival at their destination in northern Greece that has been the scene of brutal incidents of road blocks and arson attacks this week. The halt or postponing of earlier promises of the transfer of more than 2300 people by the Greek authorities has caused tension and were according to workers at the Samos camp one of the reasons for the anger causing unrest and fire in the camp there.

The Greek Parliament is expected to approve a bill entitled “Improvement of migration legislation” aiming to speed up procedures and “responding to practical challenges in the implementation of the law”. In its analysis of the bill Refugee Support Aegean (RSA) pointed to several weaknesses including limitations to interpretation during interviews, deleting the possibility to prioritise manifestly well-founded cases, widening of criteria for defining cases as manifestly unfounded, and widening the use of detention.

The new bill is an amendment to the controversial International Protection Act (IPA) that was followed by the suspension of the Greek asylum procedure between March 1 and March 31 – later replaced with a freeze of activities by the Greek asylum service that will continue until May 15 due to COVID-19. RSA recently released an analysis of the effects of the March suspension pointing to the policy of widespread and arbitrary detention under inhuman conditions, concluding: “They set a dangerous precedent for the credibility of international law and the integrity of asylum procedures in Greece and beyond.”

Local media reports the first sea arrival to Lesbos since April 1 when a boat carrying 50 men, women and children arrived to the north-western part of the island on March 6. The group is now quarantined for 14 days due to COVID-19 measures.

This article appeared in the ECRE Weekly Bulletin . You can subscribe to the Weekly Bulletin here.
Social Media
https://twitter.com/intent/tweet?text=The+Tweet+via+@ecre+%23ECREweekly+Link
https://www.facebook.com/sharer/sharer.php?u=http://bit.ly/1HyBLhV