Editorial: Three Lessons and Some New Year’s Resolutions: Asylum at the End of an Unpredictable Year 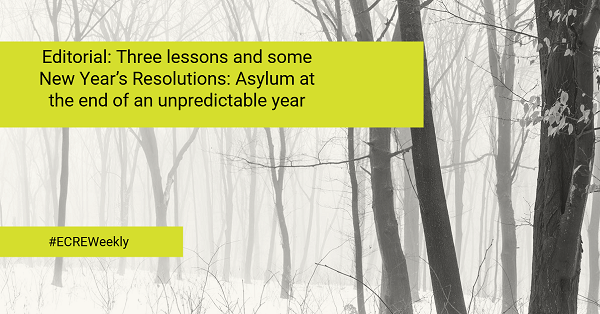 In the field of asylum policy, years tend to end much as they started – more people displaced, more hostile policies, more border violations, more bad proposals. Not so 2022. If you had predicted at the start of the year that Europe would respond effectively to a major displacement crisis – without panic and with a focus on protection, despite numbers of historic proportions – you would have been laughed out of town.

But so it was.  Nobody denies the massive challenges that remain in relation to the displacement from Ukraine and the ongoing war that caused it. ECRE’s members are working on a daily basis to respond, from Ukraine itself, to Russia and Moldova, to Poland and across the rest of the EU. ECRE’s updated Information Sheet documents the implementation of the Temporary Protection Directive and national equivalents, and all the difficulties for people covered. Nonetheless, the response fundamentally changes the debate on asylum, with certain positive lessons to be drawn from a year of unpredictable events. Each positive is highly qualified, of course.

Lesson 1: Europe can do it…

Unlike in previous displacement crises, the EU responded to the large-scale arrivals of refugees from Ukraine in a united way, with a focus on protection and access to rights, and without the usual panic, paralysis and in-fighting. The European Commission has played an exemplary role – active, decisive, pushing the Member States to do better, rather than allowing them to do ever worse. It is possible to manage displacement when the decision is taken to do so.

…but not for all.

And that is the crux of the matter: the right decisions are not always taken. The response to events in Ukraine offers scant comfort to other refugees. For example, ECRE ended the year with an event putting the “Spotlight on Afghanistan”, following a year of intensive advocacy on the country which underlined the dire situation faced by many Afghans. Despite the efforts on evacuation, which were well-intentioned if not always well executed, the over-riding response has been to seek to limit access to protection in Europe. This is still the more typical approach, sadly.

Lesson 2: the end is in sight on the legislative reforms…

ECRE was not alone in underestimating the effectiveness of the Czech Presidency, which in turn took over from an active French Presidency. The year ends with unexpected successes on the legislative reforms. The solidarity plan has been further developed and will be handed over to the Swedes. Five pieces of legislation will be adopted as a result of various deals among the Member States and between the Council and the Parliament. These are Screening and Eurodac, and then three of the pending proposals from 2016 – the Qualification Regulation (QR), the recast Reception Conditions Directive (rRCD) and the Union Resettlement Framework (URF). On the latter three, in order to secure Parliament’s support for the other proposals, the Czechs persuaded Member States to re-affirm support for the 2018 agreements on the files. This went through JHA Council last Friday and, within a week, trilogues had taken place with the Parliament on rRCD and URF, with group photos announcing the agreements yesterday. Incredibly quick, one could say. Or alternatively incredibly slow, given that these files were first agreed by the co-legislators in spring 2018. The Council then reneged, generating uproar in Parliament, however, the Commission kept these files on the table and they are all but concluded.

ECRE has commented extensively on the 2018 agreements and on all the files moving forward. While the content doesn’t merit great celebration, this is an opportunity to wrap up the reform process, including withdrawal of the files that will not pass.

That should include rejecting the Instrumentalisation Regulation: a fortunate failure of the Czech Presidency is that an agreement has not been reached among Member States on this pernicious plan, with only an update provided at last week’s JHA. Civil society worked extensively behind the scenes to persuade the governments with doubts to stand up and resist the proposal. They must maintain this position in the face of last-ditch efforts to get it through next week and then future efforts to recycle elements of it. Nothing has changed in terms of the concerns that should be taken into account by each Member State (see here and here).

Similarly, there is an effort to get a position agreed on the Asylum Procedures Regulation (APR) next week, although it looks like a partial general approach, or indeed a patchy approach, given the areas of continued disagreement and reservations. Parliament is unhelpfully continuing to argue for the APR and the related mess that is the RAMM, plus the increasingly messy Crisis Regulation, which repeals the TPD (despite the 5 million people currently protected by it) and without an adequate replacement foreseen. In ECRE’s view, the value of these proposals is limited and the damage could be significant, depending on the amendments pursued by each of the co-legislators. Rather, move on solidarity on the basis of the proposals under discussion, with a solid legislative basis added, but without the whole of the RAMM (+APR) going through.

The qualification required here is that it won’t really matter what the legal framework is, if it is not actually implemented. Concluding the reforms must be combined with a renewed focus on compliance, in the sense of implementation of standards on reception, decision-making, procedures and so on, and also in the sense of tackling the constant, flagrant violations of EU and related international law that take place, especially at borders. ECRE has never bought into the idea that reform is needed in order to secure better respect for the law, especially given the unfairness and unworkability of many of the proposals. The situation of tolerated non-compliance can only be addressed by decisive action from the Commission and from states, following the review of the courts and the scrutiny of parliaments, watchdogs and civil society, including the people who themselves are subject to violations.

The year has demonstrated again the importance of the banal day-to-day work of building and maintaining asylum systems, as reception crises in many countries, including Belgium and the Netherlands, unfurled, and lengthy processing times became a focus from Greece to the UK. In addition, the divergence in protection rates and misrepresentation of protection needs continue, as ECRE’s updated factsheet shows. As in any area of state action, there is a need for consistent and adequate provision of resources. The wider deployment of the EUAA to support Member States – now in 12 countries – and better use of EU funding are also central.

Lesson 3: the value of action on the underlying problems…

In 2022, the EU finally started to take action to address attacks on the rule of law and related corruption. Suspension of EU funding to Hungary and Poland on rule of law and public financial management grounds respectively has had some effect – and is the least that can be done. ECRE has long argued that fearmongering about migrants, and in particular about refugees, is used to detract from massive rule of law failings and blatant, pocket-lining corruption. Tackling these problems directly would do much more to protect the EU (and indeed “the European way of life”) than devoting endless resources to blocking the arrival of refugees in a way that often echoes the calls of the disruptive demagogues themselves.

…but democracy and the rule of law are still in peril

Despite some action, the situation in certain countries has deteriorated significantly, with democracy still under attack, as seen on a daily basis by NGOs.

One of the reasons that Europe was able to respond to the arrivals from Ukraine was the massive mobilisation of organised civil society (and simply “society”), as well as the active participation of all levels of government, including local authorities, municipalities and so. Yet so often civil society and ordinary people working to support people on the move face repression and even criminalisation. This great European resource is not always appreciated or used adequately.

From these qualified positive lessons a few New Year’s Resolution may be drawn.

1/ Apply the Ukraine coping strategy to the asylum system as whole. If it is possible to manage the arrival of 6 million people in 6 months, supporting less than 10 % of that number (in an average year), across the EU, is also possible. Obviously.

2/ Recognise the limits of harmonisation, which have been reached. That means unrealistic legislative reforms is not the way to tackle this challenge. Indeed, in the end, the reforms entered the realm of the absurd, with legislation that allows Member States to avoid the law, and unravels the common system. Instead, the reforms should be concluded and the focus switch to tackling the tolerated non-compliance and everyday dysfunction.

3/ Stop wasting resources on absurd externalisation fantasies and get the focus on making asylum systems function. Despite the Rwanda gambit, all the efforts on externalising options didn’t lead very far.

4/ Normalise, normalise, normalise. Some steps have been made to normalising this area of policy, which has been one of the better of aims of Commissioner Johansson’s tenure. That can continue by refusing to enter the crisis mode, which simply leaves states and the EU open to exploitation by malign forces inside and outside the bloc. Instead tackle the underlying challenges, be they attacks on the rule of law, security concerns, energy dependence. Displacement is but the symptom.