ECRE Factsheet: Asylum Statistics and the Need for Protection in Europe 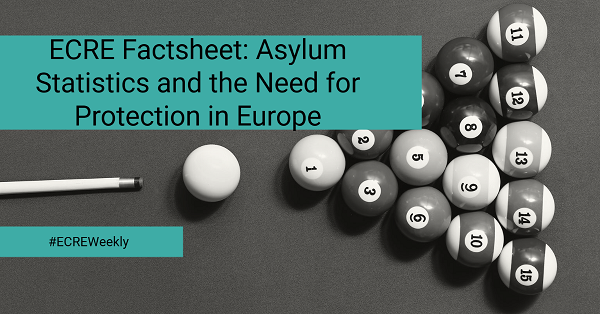 ECRE has published an update to its 2020 factsheet that takes a closer look at the reliability of asylum statistics, particularly on protection of individuals. By breaking down the numerous factors that can significantly affect such numbers, ECRE sounds a note of caution on their frequent use.

Statistics play a key role in discussions and decision-making on asylum matters. Recognition rates deemed to be low are used to support the argument that many persons reaching Europe are not in need of protection, and accordingly that policy decisions and legal changes should focus on (increasing) returns and preventing arrivals. However, because of issues in scope and reliability of asylum statistics, as well as significant discrepancies in decision-making among Member States, ECRE maintains that such numbers may misrepresent the actual need for protection.

Among other issues, various disparities can be observed in asylum figures reported at the national and at the EU level. Moreover, many hidden factors drive presented protection rates down: actors frequently include inadmissibility decisions in their calculations despite the fact that many persons who handed such decisions are entitled to protection; second instance decision making is rarely included even though on average one out of three appeal decisions are positive, bringing the number of persons recognised as in need of protection up significantly.

Lastly, statistics on protection can be a poor reflection of the need for protection because of the lack of harmonisation and insufficient quality of asylum determination procedures in Europe. Persons seeking protection are still put through an “asylum lottery”, whereby depending on which country is determined to be responsible for their claim, they may receive any of the three protection types, or be denied any protection either for inadmissibility or merit reasons; this may even come into play depending on the individual office processing their claim, within the same country. In practice, while the overall EU+ recognition rate at first instance sits at 39.6% for 2021, individual country protection rates span from 9% to 94.5%, with only 7 out of 30 countries within a 10-point range of the overall rate.

The factsheet concludes with recommendations to the European Commission, as the main source of statistics on asylum in Europe, to the reporting States, and to all authorities and actors presenting such statistics, in order to avoid misguiding information and better reflect the protection needs of those applying for asylum in Europe.