Joint Statement: NGOs call on Member States: Agreeing on the Instrumentalisation Regulation will be the Final Blow to a COMMON European Asylum System (CEAS) in Europe 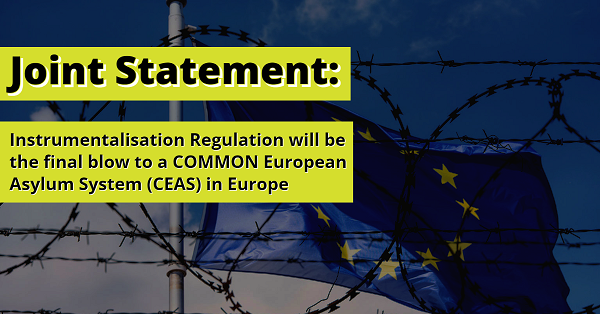 In December 2021, the European Commission presented a proposal for a Regulation addressing situations of instrumentalisation in the field of migration and asylum. The proposal introduces a mechanism which allows Member States to derogate from their responsibilities under EU asylum law in situations of “instrumentalisation” of migration. The mechanism is permanently available to Member States who can invoke it in multiple situations, essentially enabling them to derogate at will from their obligations.

We understand that there is broad support among Member States for the proposed Regulation and that the Czech Presidency aims at adoption of a common position by December. This would make it one of the fastest moving legislative files related to asylum in Council. The proposal allows states to derogate from the proposed Asylum Procedures Regulation of 2016 and amended APR proposal of 2020 (APR), the proposed recast of the Reception Conditions Directive (rRCD) of 2016, and the proposed recast Return Directive (rRD) of 2018. The derogations are substantial and substantive, significantly affecting the rights of people seeking protection.

The undersigned NGOs strongly oppose the introduction and use of the concept of instrumentalisation and its codification in EU law; we further reject reforms of EU law based on allowing widespread derogation from EU law for the following reasons:

In addition, there is a risk that these reforms will undermine respect for EU law as a whole. Introducing a model based on allowing derogations at will in a wide range of circumstances (most of the situations at the EU’s borders), may set a precedent, especially when rule of law is facing challenges across Europe. There is no evidence that regulating for derogations will encourage better implementation or compliance with EU asylum law in general.

Finally, a legal framework that allows countries to reduce standards for the treatment of people seeking asylum and refugees when instrumentalisation is involved (a very common occurrence) is likely to be replicated elsewhere in the world, thus undermining the global protection system.

Member States with an interest in the improvement of the CEAS should focus on agreeing on reforms that support asylum systems to function effectively, and that protect rights, increase compliance and contribute to trust among Member States in this conflictual policy area. An agreement on the proposed Instrumentalisation Regulation has the opposite effect and dismantles asylum in Europe, by allowing Member States to opt in and out of the CEAS.