Editorial: Instrumentalisation is Not the only Bad Proposal – But it is the Worst 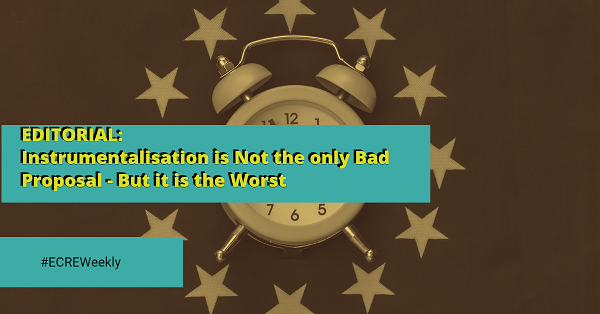 The Czech EU Presidency enters its last month having been active and effective on asylum and migration matters. That is both for good and for ill – progress on solidarity is important and activity on the Ukraine response has helped maintain the positive EU approach. The effectiveness on the Instrumentalisation Regulation, we could have done without, however.

Having decided to revive the Regulation – which should have been allowed to fade away, as not so much a step too far as a huge leap away from rule of law and destruction of the global protection system – the Presidency is now close to securing agreement among Member States at the JHA Council next week.

Attempts to downplay the risk by saying it is “only” a Partial General Approach or that the European Parliament will never agree anyway, are misplaced. Even if the agreement is only partial, with Member States agreeing on some elements and maintaining reservation on others, it would still be significant: The bulk of the derogations from asylum and reception standards are part of it; also, of all the legislative proposals on the table, few have come close to a Member State agreement. Then, although it is hoped that the Parliament will agree to reject the Regulation, that is by no means certain. There is some disarray in Parliament, as MEPs grapple with legislative proposal overload. There is also pressure to agree on something – anything – in the 18 months that remain of the Parliament’s mandate, with a risk that any proposal that makes its way out of the Council will be accepted by Parliament, package approach or not.

Thus, the onus is on the Member States who have concerns about the Instrumentalisation Regulation – and there are a number – to abstain. They might do so; they should do so.

Even in today’s feverish and crisis-ridden context, it is extraordinary that this point has been reached – first, that the Commission launched a proposal that allows Member States to decide to ignore EU law in a vast range of circumstances; second, that Member States have let it progress. NGOs and others have raised their concerns from the start, see the summary in a joint statement here signed by more than 80 organisations from 22 European countries (Austria, Belgium, Croatia, Czech Republic, Denmark, Estonia, France, Finland, Germany, Greece, Ireland, Italy, Luxembourg, The Netherlands, Norway, Poland, Portugal, Serbia, Slovenia, Spain, Sweden and Switzerland) and 17 Europe-wide networks and international organisations. It is available in 11 languages so no one can claim to be unaware of what is at stake.

For Member States who are less concerned about the impact on the rights of applicants and the undermining of EU law, they might consider the impact on themselves. First, allowing countries to derogate means standards of protection fall. Lower standards in some countries has a significant impact on other countries. Currently this plays out in relations to non-compliance: where countries do not respect their obligations under EU law, including engaging in deliberate violations, this increases the responsibility of other countries. People still need protection, refugees still arrive in the EU but they move on to Member States which actually respect protection standards, and rightly so.

A country like Germany, for example, might want to reflect on the impact of legislative changes and practices – similar to some of the proposals and not in conformity with current EU law – in Lithuania and Poland, in response to the Belarus events. What happens to people who cannot access their rights and protection in those countries?

Continuing in the appeal to enlightened self-interest, the dismantling of a common system is implied by the proposals. It is not that there will be one derogatory regime but rather Member States will be able to chose from a menu of derogations. Thus, in any of the multiple situations of “instrumentalisation” that will fit with in the category, the affected Member States will be derogating from various parts of EU law. The situation will be exactly that which the CJEU warned against in its efforts to circumscribe the use of derogations. Overuse of derogation will lead to a fragmented, non-harmonised system.

In this case, France and Germany – but also perhaps Sweden, Spain, and Belgium, coincidentally the forthcoming Presidencies – might want to reflect on which countries will be most affected if the (semblance of a) common asylum system unravels.

The impact on the ongoing rule of law crisis might also be considered. As a matter of principle, basing a reform on allowing derogation from the law, in an area of EU law where there is already non-compliance and a lack enforcement, seems… ill-advised. Can this approach be confined to the asylum sector, where Member States may be less bothered about the people most affected? Or will it spread elsewhere?

Countries that are concerned about respect for the law and the rule of law within the EU, like the Netherlands, for example, might reflect on the implications of condoning and encouraging lack of respect for legal standards, as well as with the whole paradoxical enterprise of basing reform on allowing derogations from EU law.

Finally, the impact beyond Europe might also be considered. If the response in Europe is to allow a lowering of protection standards and avoidance of obligations in situations of “instrumentalisation”, other countries will want a piece of that. Manipulating refugees is (obviously…) wrong and should be condemned. Unfortunately, it is also very common – indeed it happens all the time. Codifying into EU law the concept of “instrumentalisation” is dangerous, especially as it is accompanied by a sinister attempt at norm entrepreneurship – an effort to expand the concept of breach of territorial integrity to include movement of “instrumentalised” people, thus – supposedly – legitimising self defence against these people.

Member States might want to consider the impact on international law and global protection systems, by the intrusion of this approach in international sphere and if replicated by other countries.

Instrumentalisation is not the only bad proposal. But it is the worst. It is unfortunate and contradictory that it moves forward when, for once, there has been a positive response to a displacement crisis, which indicates that the tools are available already, they just need to be used, and that an effective approach is already possible when the right choices are made. Of course, rejection of this one proposal is not the end – especially if some of the derogatory measures and the concept of instrumentalisation itself are retained or added to other proposals. Nonetheless, is crucially important to refuse to accept this leap too far, for good and for bad reasons.