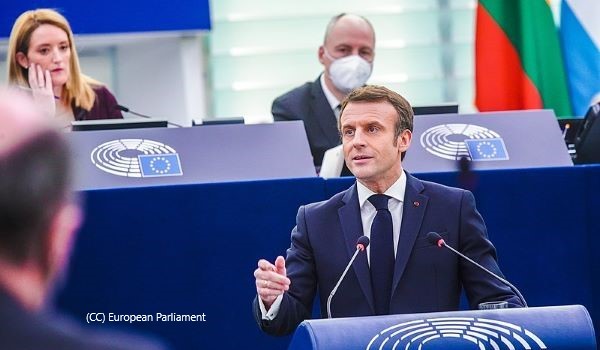 There are reports of new momentum after a meeting of the JHA Council, preceded by a speech from President Macron. Even Commissioner Johansson seemed pleased, understandable after two years of wrangling recalcitrant Member States. The French ideas are based on a non-paper circulating in Brussels over recent weeks, with some “course correction” on relocation, probably after a reality check from a southerly direction.

At the centre of the French plan is the idea of a “gradual” approach – step-by-step. It is not possible to progress on everything so attempts will be made in a few areas. This is a negotiating strategy – and is a rather classic way to break a deadlock: identify a few elements and try to make progress on them, while leaving aside very contentious points.

In itself, it isn’t very different from recent EU Presidencies. Since 2018 and the collapse of the inter-institutional agreement covering large chunks of the 2016 reform package, no Presidencies have attempted to advance across all the files, of the 2016 CEAS Package or the 2020 Pact. Either they try to take forward one or two proposals – Germany tried to reach an agreement on the EU Asylum Agency, Portugal eventually managed it – or they have no interest in supporting negotiations because they’ve given up on EU asylum policy so apply equal work to all files, i.e. none.

The gradual approach stands in contrast to the package approach, whereby nothing is agreed until everything is agreed, as supported by those who want deeper reform – or none at all (the position of the European Parliament under the last mandate and the southern Member States; arguably, the Pact represented a package approach in its efforts to offer something to everyone). ECRE suggested that the EUAA agreement and lack of movement on the Pact signalled the end of the package approach and opened the door to mini-deals as the way forward.  Even for the Commission, it seems that efforts are made to claim any policy or operational measures as an example of the Pact being achieved, while at the same time new proposals are launched which recycle parts of the Pact (or measures that didn’t even make it into the Pact), in a search for any agreement or achievement – a legacy hunt.

The question is whether the French will have the weight and skill to achieve the small steps they are aiming at, and whether the mini-deals they are proposing offer enough to gain support from enough Member States – or at least enough to keep people talking.

In the non-paper, France put forward two mini-deals as part of its gradual approach, which seem to have merged into one meso-deal at the JHA Council. In the text, the first deal is screening and in exchange support, and the second deal is relocation in exchange for tighter control of “secondary” movement, via better implementation of the Dublin Regulation. The latter appears as an afterthought in the paper but reality bites: it is clear from the press conference that relocation remains a priority and certain states won’t even talk unless it is at the heart of any potential deal.

Technical, operational and financial support would be far from enough for countries at the border – as is surely well known by now. Indeed, these forms of support are already available – plentiful even – but are not enough to get external border states to implement the rules as they are, never mind implementing a model where they have additional responsibilities to detain and screen at the border.

Thus, the Council has agreed on an adapted and merged version of the deals: a gradual approach to talk about an agreement covering screening in exchange for relocation from and to SOME Member States. It is clear that certain countries continue to object to mandatory relocation and they will be expected to offer “support” instead.

The good news is that Member States are debating and offering relocation again, including relocation after disembarkation. ECRE strongly supports relocation (in the absence of the deeper reform of rules on responsibility sharing that is of course needed above all) and argues that in the current context it is a humanitarian imperative, not just a means of realising solidarity among states. Detailed plans on how it could work were put forward by ECRE and many others.

However unfortunate, relocation mechanisms can only work in coalitions of the willing, and all Member State engagement should be welcome (there is no need for it to be a majority). The French are speaking of 12 Member States ready to be involved. This is in line with ECRE’s own estimate and the numbers that joined previous initiatives, such as the plan brokered by France and Germany. Although some considered the number “optimistic” that isn’t really the point. Building support for relocation may take time: the important issue is that time and effort is expended on it. As before, local authorities, cities, municipalities, civil society and international organisations are ready to support.

It is not just relocation that requires coalitions of the willing: any agreement on anything is only likely to be by majority rather than unanimity. There are certain Member States who don’t want the EU to have an asylum policy, who are even more hostile towards refugees than towards other migration, and the only reform they would consider is one that grants them the licence to deny entry based on derogation from their obligations under EU and international law or otherwise legalises their pushbacks. Currently, their big push – symbolic but irritating – is for EU funding to be used to build walls. Unfortunately there has been too much pandering to this group and too little focus on making asylum work. Member States working around them, convened by the Presidency is a useful move.

If relocation is back, it is less clear what is on the other side of the deal. The focus in the paper is “screening”. This seems to mean stopping and assessing people at borders, with restriction of movement, in order to carry out a filtering. There is of course the Screening Regulation among the legislative proposals, however it is not referred to outright.

It could be that the French Presidency nonetheless wants to take forward the Regulation or – more likely – selected elements of it. But there might be something else in mind – something operational rather than legislative. As “screening” is quite a general term, the measures in the newly proposed Instrumentalisation Regulation could even be classed as screening. That the Presidency may have abandoned the Council Decision on emergency measures in response to Belarus’ actions, which is a precursor to the Instrumentalisation Regulation, indicated that it is not aiming to take forward this tool (hopefully).

In any case, it can be assumed that screening refers to detention at borders and some form of assessment with outcomes such as entry or a return decision, and the use of a fiction of non-entry. The 2016 proposals, the controlled centres idea, hotspots, the 2020 proposals: all variations on this theme. France, along with Germany, was the one of the main drivers of the model in the Pact based on screening and expanded use of border procedures, and spent considerable efforts trying to convince Southern Member States of their value – to no avail. These options are highly unpopular in countries at the external borders (as well as highly problematic from a fundamental rights perspective) so the detail will be necessary to understand whether the gradual approach will gradually move forward or not. Will the beefed up solidarity component in the form of relocation be enough to offset the increased responsibilities envisaged in this screening? This is the question – it is always the same question.

The other priority underlined by the non-paper and Macron is the reform of Schengen. Here, rapid progress may be a challenge, given the confused nature of the proposed amendments to the Schengen Border Code, which run together asylum and Schengen acquis, along the lines of the Council Legal Service’s criticism of the Pact. In addition, the awkward “instrumentalisation” definition and related measures are added. The main thrust of the proposal is efforts to get Member States to cut out internal border checks and controls. It is not obvious that France is the country with the strongest interest in this, given its actions at its border(s) with other Member States. (ECRE’s full analysis to follow)

It could be argued that talk of momentum is wrong. France is in the middle of an election campaign, with the President challenged by three candidates to his right (arguably).  The selection of priorities of the Presidency illustrates what it is safe to say during an election campaign not areas where progress is likely. Border screening and Schengen. Tough talk. Neither are likely to progress because sufficient measures in exchange are not on the table – support is not enough and the references to relocation are peripheral.

There is a better interpretation. France is trying to lay the groundwork for future deal-making which can only take place after the election (depending on who wins). The way out of the morass is for France and Germany to work together on realistic deals that are acceptable to a majority of the Member States, and which are based on improving not undermining the Common European Asylum System.

They will need to do this because the next Presidency (Czech Republic) is unlikely to have the weight or the inclination to take much forward. It could advance under Sweden and even be concluded by Spain and Belgium, a more promising string of Presidencies. This is delicate diplomatic work and will have to wait until after the elections and even if momentum can be maintained, reaching agreement in this scenario would take two years. Given the complexity, uncertainties and timeline, in the meantime, they also have an interest in supporting informal and operational agreements among Member States and putting pressure on the Commission and agencies to improve the situation. That means better compliance across the board; ending the proliferation of bad legislative proposals; mitigating the damage of Dublin through relocation mechanisms and better respect for family reunification; and support for asylum and inclusion through funding and the use of the agencies.

France and Germany don’t have much choice: if the CEAS collapses, either through misguided reform or – more likely – through flagrant, unpunished non-compliance, they will be the countries most affected. As it is, they bear the most significant consequences of other Member States’ lack of respect for the rules. For reasons of self interest, they may need to step in to save the system, starting with creating the basis of discussions and for a realistic agreement.