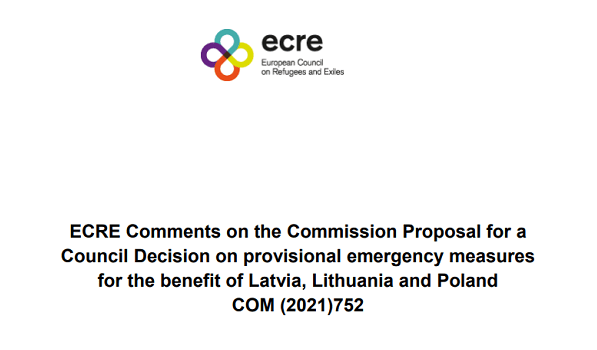 ECRE published its Comments on the European Commission Proposal for a Council Decision on provisional emergency measures for the benefit of Latvia, Lithuania and Poland.

The negative impact on these rights derives from the expanded use of concepts and practices which undermine the right to asylum. Many elements of the emergency measures are already part of the legislative proposals launched with the Pact on Migration and Asylum, such as the border procedure and allowing derogations.

Generally, ECRE has concerns about the lack of a clear definition of “instrumentalization” and related uncertainty as to the scope of the measures. Doubts also arise as to the necessity and proportionality of the measures.

The Comments assess the provisions for delayed registration; extension and expansion of the border procedure; right to an effective remedy; limitation of reception conditions; derogation from the Return Directive and specific guarantees.

While ECRE does not support the measures proposed, it submits (non-exhaustive) observations and recommendations, aimed at reducing the negative impact on fundamental rights.