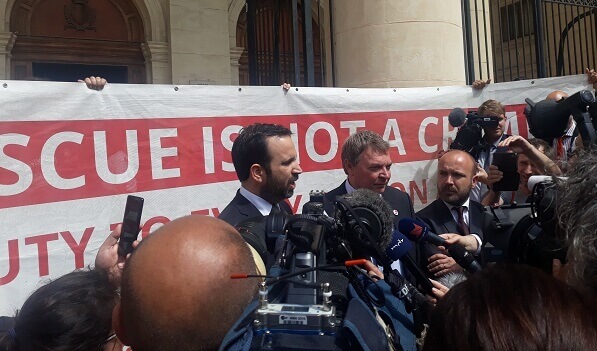 A Maltese Appeal Court cleared Lifeline Captain Claus-Peter Reisch of all charges. The Court found no criminal intent when the Captain entered Maltese waters without licence after saving over 200 people at sea. This week, NGO Sea Watch rescued over 200 people after Maltese authorities failed to intervene.

Captain Reisch was arrested in 2018 following the rescue of 234 people from the Mediterranean Sea.  He was charged with two offences: entering Maltese waters without the necessary registration or licence and using a vessel for commercial purposes without a licence. In the initial judgment, delivered in May 2019, he was found guilty of charge one and issued with a €10,000 fine. Now, the Court of Appeal concluded that there was no evidence of criminal intent in relation to navigating in Maltese waters without the necessary registration and overturned the previous ruling.

The NGO Aditus, involved in the case, commented: “Today’s victory is extremely significant for us. It confirmed what we have been saying since the very beginning of this saga: Captain Claus-Peter Reisch had only been interested in saving lives at sea and his actions had been all performed in good faith. The judgement highlights short-comings in the manner the prosecuting officers handled the case. For us, yet without attributing such opinions to the Court, these statements confirm our suspicions that this case was never really ever about the ship’s registration but more about EU Member States’ attempts to frustrate NGOs rescuing migrants in the Mediterranean.”

On Thursday and Friday of this week, the rescue vessel Sea Watch 3, run by the NGO Sea Watch, saved over 100 people at the Central Mediterranean in three operations within 24h. Maltese authorities reportedly refused to initiate a rescue in their waters. Sea Watch also reports pull-backs to Libya by the so-called Libyan Coastguard.