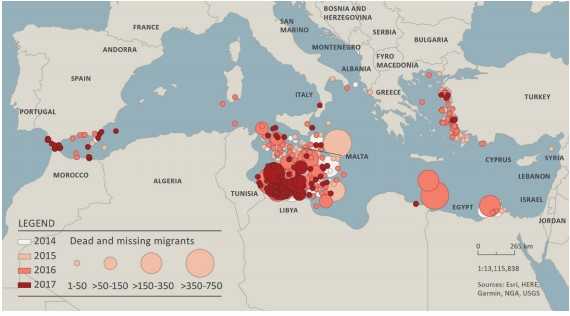 50 people are reported missing on the Central Mediterranean off the Libyan coast adding to the 14.500 dead or missing since IOM started documentation in 2014. A total of 22.500 migrants have lost their life’s worldwide in the same period according to the IOM report Fatal Journeys Volume 3: Improving Data on Missing Migrants released last week.

The Mediterranean has for years been the deadliest region for migrants and refugees and new comparative data shows that this trend continues in 2017. Taking the first half of the years 2015, 2016 and 2017, the number of arrivals decreased noticeable in 2017, but the death rate almost doubled from 1.2 to 2.1. This corresponds with the increase in the  number of bodies found on shores of North Africa in the referred period of time.

Since recording started in 2014, the biggest share of all deaths remains unidentified, hence the actual numbers might be much higher. In lack of a common database for keeping track, the published statistics are to be qualified as at best a minimum estimation, considering the enormous differences in access and reliability, the comparison across regions over time remains difficult.

The report concludes that: “the problem is not simply a lack of potential data. There are many ways in which data on missing migrants could be improved, but national authorities may not have the resources or interest to prioritize data collection and analysis.”