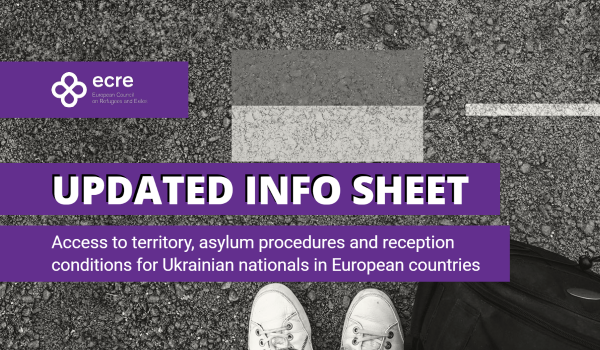 In this time the Commission invoked the Temporary Protection Directive (TPD) which has already been transposed and implemented in many Member States. The TPD applies to Ukrainian nationals residing in Ukraine who are displaced as of 24 February, beneficiaries of international protection or an equivalent protection status in Ukraine, as well as family members of both these groups. Further, the TPD extends to  third country nationals or stateless persons legally and permanently residing in Ukraine who cannot return back to their country of origin – who can be covered either by the EU directive or by national provisions in the relevant EU Member State. The Directive does not apply to Denmark (given op-outs on parts EU cooperation) and non-EU member states of Schengen – Norway, Lichtenstein, Switzerland and Iceland.

While some EU countries such as Spain and Finland have chosen to extent the scope of the directive by applying it to Ukrainians who fled shortly before the 24 February invasion, others such as Hungary are seeking to reduce the scope through a restrictive decree in process of being enacted.

EU countries which are not subject to the EU Directive, such as Iceland and Denmark have announced plans for national measures of protection. Iceland has triggered a national provision which grants collective protection to groups from a specific region and Denmark has announced that a new law will be enacted in mid-March to provide protection to those fleeing Ukraine. Many of the specifics of the national provisions remain unclear and accordingly the extent to which they will include third-country nationals who were legally residing in Ukraine and other third country nationals is uncertain.

Ukrainians do not require a visa to enter Schengen countries and are allowed to stay for up to 90 days provided they have legal documents. However, some non-Schengen countries like Ireland and Turkey have both waived visa requirements for Ukrainians. A European country which has not waived visa requirements is the UK which is currently only accepting visa applications under a limited family scheme. This scheme is for family members of Ukrainians already residing in the UK and applicants need a visa before travelling to the UK which requires an interview in advance. One of the other trends emerging in relation to travel requirements was Covid-19 restrictions. Most of the countries covered in the information sheet had cancelled or no longer had in place such requirements, however Malta still enforces a 14-day quarantine and Bulgaria requires a vaccination or recovery certificate for entry. The measures outlined in the information sheet are subject to change and will be updated as the situation on the ground changes.