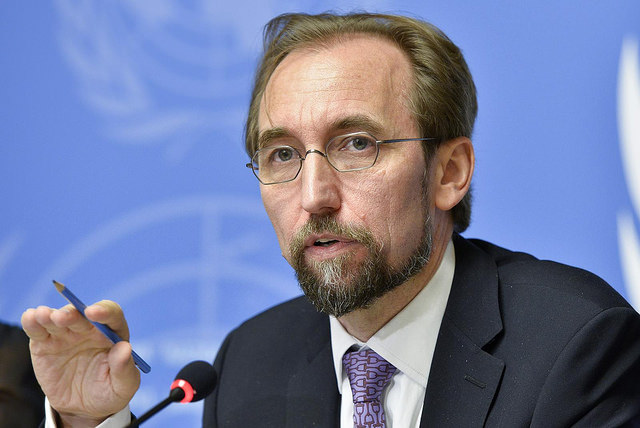 UN High Commissioner for Human Rights Zeid Ra’ad Al Hussein defined EU cooperation with Libya on migrant control as inhumane. EU denied the accusations, highlighting their positive intentions and the cooperation with UN agencies. However, the agencies in question, UNHCR and IOM expressed serious concerns of the situation of migrants and refugees in Libya.

On 14 November, Zeid Ra’ad Al Hussein issued a statement expressing his horror at the conditions of under which migrants are detained in Libya. Based on findings of UN human rights monitors visit to detention facilities run by Libya’s Department of Combatting Illegal Migration (DCIM) in early November, the UN Human Rights Commissioner confirmed earlier concerns over human rights violations and criticized EU assistance to the Libyan Coast Guard, who intercepts, returns and detains migrants often under the use of violence: “The increasing interventions of the EU and its member states have done nothing so far to reduce the level of abuses suffered by migrants. Our monitoring, in fact, shows a fast deterioration in their situation in Libya.”

The progress report on the European Agenda on Migration outlines intensified efforts of EU in supporting the Libyan Coast Guard by ongoing training of in total 142 staff, the setup of a monitoring system and the return of rescue vessels. An enhanced focus is targeting the conditions on the ground. Highlighted particular is the cooperation with The United Nation High Commissioner for Refugees (UNHCR) and the International Organisation for Migration (IOM) to release migrants in detention. Further, the establishment of a permanent EU presence is announced as soon as security conditions allows.

IOM as well as UNHCR both express their concerns over violations of human rights of migrants and refugees in Libya. As a result of the deterring security situation, UNHCR conducted the first evacuation of a group of 25 vulnerable refugees from Libya to Niger. The evacuation took place in order to facilitate the examination of the cases of these individuals in view of their resettlement from Niger. “Today’s evacuation symbolizes hope in finding safe solutions for vulnerable refugees in Libya,” Roberto Mignone, UNHCR representative for Libya, said in a statement.