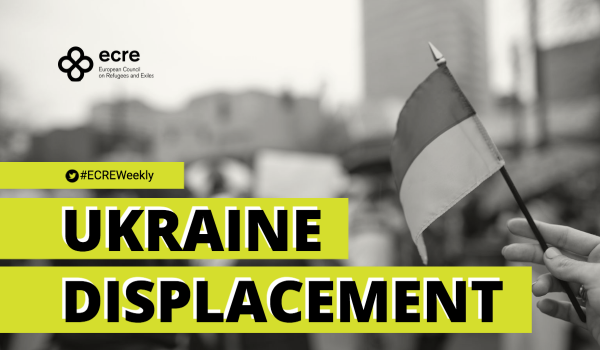 An unprecedented total of more than 10 million people have been displaced inside Ukraine or across its borders since the Russian invasion in just one month and vulnerable groups including children, third country nationals and stateless people are exposed. Authorities in neighbouring countries that have seen the bulk of arrivals rely on civil society and EU support. Amid member state quarrels over the responsibility for Ukrainian refugees the Commission launches a Solidarity Platform and rejects mandatory distribution.

With 6,5 million people internally displaced in Ukraine and almost 3,7 million in refuge a total of 10 million people have been displaced in just one month since the Russian invasion of Ukraine on 24 February. The UN Refugee Agency (UNHCR) warns that “Without international solidarity, Ukraine’s displacement crisis could turn into catastrophe” further stating: “Behind the figures lies unimaginable suffering that only grows as humanitarian needs increase. Intense fighting continues to trigger large-scale displacement while simultaneously exacerbating the plight of the internally displaced or those who cannot flee the worst-affected areas”. While aid agencies are ramping up relief and support efforts in response to the unprecedented displacement crisis, Council of Europe and UNICEF warns of the risk of trafficking and exploitation of women and children in displacement. Reports of third country nationals attempting to flee the war in detention in Poland and Ukraine have also emerged. According to the Global Detention Project: “There appear to be 3 operational migration-related detention centres in Ukraine, called Temporary stays for foreigners and stateless persons, or PTPI”. Further, the European Network on Statelessness (ENS) released a blogpost on the dire situation for people in Ukraine who are stateless or have ‘undetermined nationality’.

The countries neighbouring Ukraine have seen large scale arrivals with Poland receiving the bulk of refugees. With more than 2 million arrivals civilians have stepped up to host refugees. “My son is staying with his auntie because I gave my flat away to eight refugees,” Krzysztof Chawrona, a 41-year-old entrepreneur from Krakow and founder of Nidaros, an organisation that supports Ukrainian nationals told media, continuing: “In my second flat, which I used to rent out to one company, there are seven people in 40 square metres. And they are grateful that they have a place to stay”. While praising the solidarity shown by civil society, Amnesty International points to the need for increased efforts by authorities: “without central authorities taking responsibility and concerted action, people in need of protection and assistance risk falling through the cracks. People fleeing Ukraine are anxious to get reliable information about shelter, transportation and their legal status, but without coordination, people risk being deprived of such essentials, and being harassed or preyed upon by criminals. The Polish government must now step up to meet these challenges and keep people safe”, the organisations Regional Director for Europe, Nils Muižnieks, stated. ECRE member Helsinki Foundation for Human Rights also urges further involvement of authorities and warns of a lack of psychological support. Meanwhile, civilian support to refugees at the borders with Belarus notorious for violent pushbacks by Polish authorities remains a criminal offence.

Hungary where more than 300,000 Ukrainian refugees have arrived, recently tightened border controls and on 23 March, Foreign Minister Péter Szijjártó told the general assembly of the UN Human Rights Council in Geneva, that while Ukrainians are accepted its borders remain closed to “illegal immigrants”.  Hungarian Prime Minister, Viktor Orban, notorius for his anti-migration and anti-EU stands, has reached out to the European Commission for assitance in dealing with Ukrainian refugees.  According to a letter, addressed to Commission President Ursula Von der Leyen, Orban wants to secure loans under the Recovery and Resilience Facility for “defence, border control and humanitarian and other acute crisis management tasks”. While Romania has seen more than half a million arrivals the country remains mainly a place of transit – on 21 March only 4,180 asylum requests had been launched by Ukrainians. Roughly half of the Ukrainian refugees who have entered Romania arrived through Moldova bordering both countries. Authorities in Moldova, where almost 400,000 Ukrainian refugees have arrived or passed through, have requested support from the EU to avoid a destabilisation of the poor country with a population of just 2,6 million people. On 22 March the UN refugee and migration agencies UNHCR and IOM welcomed: “the pledges by European Union (EU) Member States and other European States to transfer refugees from Moldova to their territory under the auspices of the EU Solidarity Platform”. And on the same day, the European Border and Coast Guard Agency (Frontex) confirmed the deployment of standing corps officers to Moldova “to support the ongoing management of the border situation amid a growing number of Ukrainian refugees fleeing the war in their home country”.

On 23 March the European Commission outlined “the actions being taken to support Member States in meeting the needs of those fleeing the war against Ukraine and its people” in terms of child protection, education, healthcare, jobs and accommodation and housing. The commission further introduced a Solidarity Platform: “bringing together Member States and EU Agencies, to coordinate support to Member States in need. The Platform will help organise the transfers of people within the EU to the Member States that have reception capacity”. According to EU Commissioner for Home Affairs, Ylva Johansson mandatory quotas are not under consideration: “We’re not going to take people and decide where they should settle in the European Union” she said. This message comes at a time when some member states including Germany has called for a “fair” distribution of Ukrainian refugees while reportedly, “In a role reversal of the migration crisis in 2015 and 2016, the frontline countries of Poland, the Czech Republic, Slovakia, Hungary and Romania are demanding that the EU leaves refugees in their territories rather than redistributing them”.