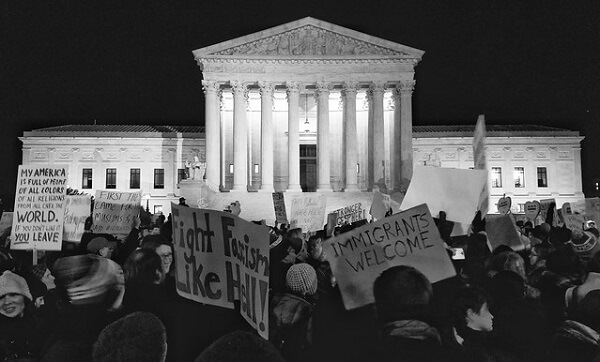 The Trump administration can start implementing a ‘safe-third-country’ policy that denies asylum requests to people who have travelled through another country, such as Mexico, without seeking protection.

By a vote of 7-2, the justices said the administration can enforce the rule announced in July while a legal challenge is still on-going. They did not explain the reasoning behind their decision, which came after a District Judge had initially blocked the new rule from taking effect in late July, saying “it is inconsistent with the existing asylum laws.” A three-judge panel of the U.S. 9th Circuit Court of Appeals narrowed that order, ruling it only applied in California and Arizona. Another intervention from the District judge was again overturned early this week.

A record number of Central American families have sought asylum in the United States. The Justice Department says there are more than 436,000 pending cases. According to the new rule, they can only claim asylum in the U.S. if their asylum claims in the country they transited has been rejected.

If asylum seekers are believed to face grave danger in their country of origin, their deportation can still be halted under the Convention Against Torture Non-refoulement principle. This “withholding of removal” is a lesser status that blocks their deportation but does not put them on a path to legal U.S. residency.

Dissenting Justice Sonia Sotomayor wrote that “the rule the Government promulgated topples decades of settled asylum practices and affects some of the most vulnerable people in the Western Hemisphere — without affording the public a chance to weigh in.” The other dissenting judge commented “the Government implemented its rule without first providing the public notice and inviting the public input generally required by law.”

“We are looking at a potentially devastating situation at the southern border,” Lee Gelernt of the American Civil Liberties Union warned. “This is just a temporary step, and we’re hopeful we’ll prevail at the end of the day,” he said in a statement. “The lives of thousands of families are at stake.”