ECRE Editorial: TPD Implementation: Ukraine Displacement Crisis at the End of Its Beginning 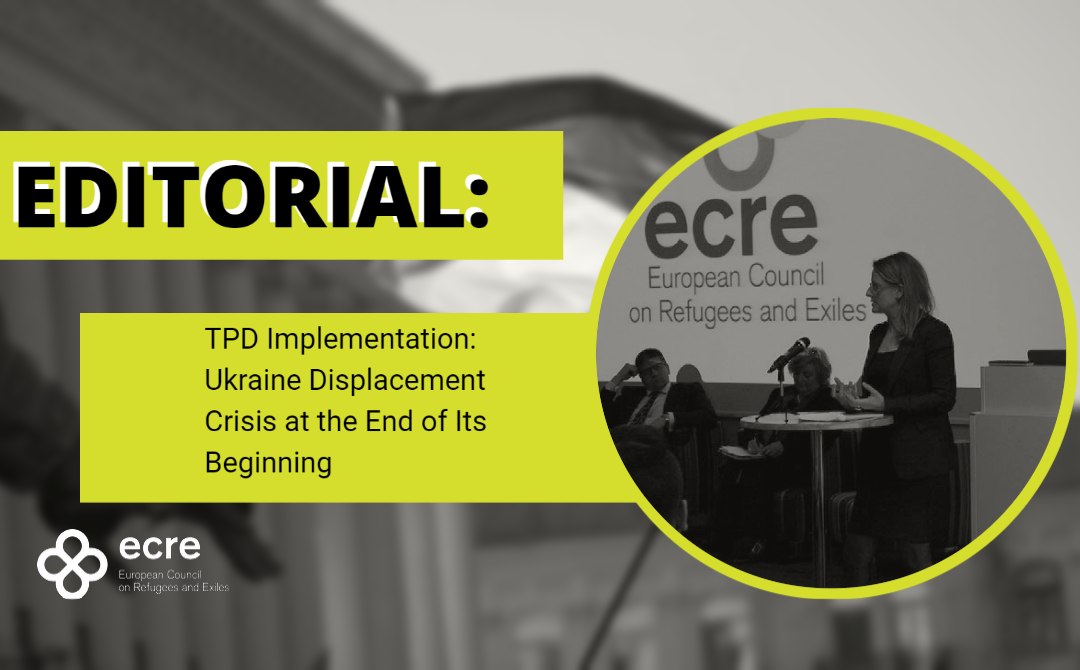 In Brussels and in EU capitals, attention of the asylum and migration sector is largely focussed on Ukraine – understandably, given the ongoing war and continued massive displacement. Nonetheless, ECRE urges a balance between Ukraine and the wider asylum system in terms of distribution of both attention and political resources. On Ukraine, the response of the EU and of individual European countries has largely been positive, at least in terms of political decisions, including on legal and operational questions, and in terms of the rhetoric and narrative of this crisis, as ECRE and many others have previously commented.

Above all, activation of the Temporary Protection Directive was the right political decision and has greatly enhanced the prospects of protection and greatly eased the task facing Member States. However, the preliminary analysis of the first stage of implementation of the TPD is now becoming available, based on the monitoring by ECRE and others (EUAA/UMHCR) and it shows that many challenges are arising, particularly on the practical side. These need to be addressed now – three months into this crisis, the situation is evolving from a humanitarian response to medium-term structural support and societal inclusion. Identifying and addressing emerging challenges will help this transition.

The scope of the TPD

Reviewing the situation on the ground, a first challenge concerns the scope of the TPD. While at least 12 Member States have used their discretion to widen the categories covered, for instance to include third country nationals who were resident but without permanent residence permits or Ukrainians who left before the invasion, the majority of Member States have chosen a more restrictive approach. While it should be noted that the scope of TPD is wide – and indeed wider than might have been expected – there is no reason not to follow the guidance of the Commission and go beyond the strict letter of the Decision. The problem of scope is compounded by the absence of an effective remedy for those excluded from the TPD and there is a risk to the countries concerned of complex multi-level legal challenges. This would be avoided with a more foresighted decision on wider scope.

Without downplaying the challenge of scope related to legal design, far greater difficulties are arising on the practical level. The challenges linked to registration have been well documented:  yes, the huge number of 2.7 million people have been registered (96% holders of Ukrainian nationality, which is to be expected given resident population composition at the time of the invasion). There are however 5.1 million people who have fled. So up to 2.4 million are awaiting registration and in some cases choosing not to register.

Two challenges that relate to registration are the recognition of documents issued by Ukraine (where more guidance from the EU would be highly valuable) and the issuing of ID documents to Ukrainians, where delays have been recorded in some Member States. The latter is important because the document may be necessary for accessing rights. The very uneven distribution of people who have fled Ukraine of course means that the responsibilities of Member States and the capacity they require to respond is hugely varied.

This takes us to the area creating most challenges by far – housing. Unsurprisingly given the numbers of people involved, ensuring that everyone has adequate housing is the primary concern in most Member States. Problems involve state provision of unsuitable accommodation; pressure on and lack of support for families hosting relatives; difficulties in matching refugees with hosts offering accommodation; and then the long-term sustainability of all the above options.

The use of the TPD provides the great benefit of avoiding often lengthy and stressful status determination procedures, during which time people are left in limbo with limited access to rights, which has detrimental effects for them and for society. For the Ukraine crisis, with protection status immediately available, access to the content of protection – the rights attached to the protection status – is more prominent. It is a logical matter of sequencing that access to housing first emerges as the challenge however access to health, education and the labour market are all likely to become more prominent the longer that people are forced to stay outside the country.

From emergency operations to inclusion

In particular, if some level of conflict continues into the medium term and large numbers of people cannot return, then the response will need to transition into medium-term structural support. Currently, in most of the EU Member States receiving large numbers of refugees in relation to population size, the response is essentially a humanitarian relief operation. Many of the difficulties thus far are those that are typical and often unavoidable in such situations: coordination of all the different interveners; mobilising and absorbing funding; logistical and operational mobilisation, particularly in provision of shelter and other immediate needs; tensions between states and other providers of assistance; risks of trafficking and wider questions of vulnerability assessment and provision for vulnerable groups etc.

The transition from an emergency relief situation to a structural support through inclusion in the host societies for a displaced population is a situation that – unfortunately – arises in the vast majority of displacement crises, given the increasing average length of displacement due protracted conflicts, entrenchment of repressive regimes and other factors meaning that return is often not a possible durable solution (despite being the preferred option of affected people). A major difference with this crisis is that European countries are in a far better position to provide medium- or long-term support than almost all major refugee hosting countries, many of which have limited resources or face challenges of fragility and instability.

The preliminary review of TPD implementation challenges, combined with long-term assessment of needs and capacities in Europe, suggest the priorities for EU support. First, a wider interpretation of the scope of the TPD will be useful. It simply doesn’t make sense to tie up resources of civil society and governments in legal challenges related to those excluded.

Second, authoritative guidance on recognition of documents (including electronic documents) and simply on document types, as well as related questions of evidence and evidential standards is immediately needed.

Third, many of the practical challenges are linked to state capacity – how quickly can they mobilise to issue documents, or produce guidance for ministries, agencies, local authorities and others involved in the response? What financial and human resources are available to increase capacity, for instance, in the provision of emergency housing or education provision? Thus, it is clear that the response has to be “whole of society” and indeed whole of state. All relevant ministries need to be involved as does civil society (widely understood). EU funding, especially cohesion funds, could be decisive if spent in the right way. Civil society is already playing a crucial role and will need to continue to do so – there is no choice because states cannot manage this alone. It is also an investment to avoid problems later – for instance, provision of advice and support to people early on can avoid later problems, such as provision of legal assistance at the point of registration, provision of support and advice on hosting options to ensure better matches, information from community groups to dispel myths on different member states etc.

This means that adequate funding, including EU funding, must reach civil society but also that states need to allow civil society to operate. The EU Asylum Agency as well as the Commission has an important role to play supporting Member States on the issues of registration and reception. ECRE has urged Member States to request EUAA deployment, as is now happening, so that it can provide operational support as well as providing information and training resources. A wider approach is also required with integration, employment and social affairs personnel and funding more important from now on.

Finally, beyond the practical considerations, the open political approach needs to hold. The more positive response to this displacement is a matter of political choice. There are reasons including those linked to race and religion as to why the response was different; the scale and geographic proximity were also factors. Above all, though, it was clear that the usual panic and disunity would have had security implications and played into the hands of Russia. The decision was taken to manage and to use all the available tools, TPD included, in order to manage.

Now, in order to transition to medium-term structural support through inclusion, unity must be maintained – even if unanimity cannot be. The results of the Hungarian election generate risks in this regard but, if necessary, one or more state should be isolated with the rest continuing the united approach. The open and welcoming political stance has to be maintained and not least because it has an impact on public support, which also needs to be maintained. The collective approach to responsibility sharing is also necessary, such as encouraging and facilitating onward movement to ensure more even geographic distribution. Conflict on this question is the main source of dysfunction and breakdown during previous displacement crises.

This point is probably the end of the beginning not the beginning of the end of this displacement crisis. A first review of implementation of the TPD and accompanying challenges shows that effectiveness management of the Ukraine conflict is possible but also hangs in the balance. And that is even before we come to the impact of this situation on the wider asylum system.