Overview of Status Quo Regarding Evacuations, Pathways to Protection and Access to Asylum for Afghans in Europe – December 2021 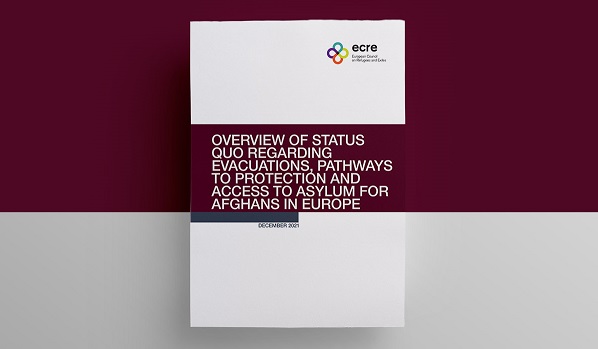 ECRE has published a document on past and current evacuation schemes available for Afghans; other pathways to protection; and the treatment of Afghan international protection applicants. The document compiles information collected from ECRE member organisations, the ELENA network, and open source material. It particularly benefited from an overview prepared by Jesuit Refugee Service (JRS) Europe.

It is a non-exhaustive overview based on the information available at the moment of compiling the data. The information was collected from August until mid-December 2021. All efforts have been made to ensure that the information is up to date, but please note that some of the measures referred to may have changed in the meantime. The purpose of the document is to assist others to monitor, analyse and influence the issues covered in the document. The information or views it contains do not necessarily represent ECRE’s position and the document does not assess the actions of the states. Rather, it collates factual and descriptive information, insofar as that is available.

The responses of European governments to the situation which unfolded in Afghanistan in late summer 2021 have varied. The number of people evacuated by European countries ranges from thousands to much smaller numbers.

In terms of immigration or protection status offered to evacuees, countries including Belgium, Denmark, Slovenia, and the UK opted to offer residence permits (whether temporary and renewable, or permanent) rather than protection status, while others including the Czech Republic, Greece, Sweden, and Switzerland granted protection status automatically to newly arrived Afghans. Estonia, France, Germany, Hungary, Italy, the Netherlands, Poland, and Spain required evacuees to make an asylum claim through the usual channels.  The authorities in France and Spain declared their intention to prioritise Afghan evacuees’ claims over those of other applicants, whereas the authorities in Belgium clarified that files of Afghan evacuees would not be given priority over others.

Following the evacuations that took place over the summer, fewer countries have initiated pathways for Afghans to continue to seek protection. Finland, Ireland, Italy, Portugal, and the UK have either existing or planned pathways specifically for Afghans, whether through resettlement schemes or family reunification. Belgium has a framework for humanitarian visas and Germany intends to establish humanitarian corridors for those fleeing persecution; these routes are not exclusively limited to Afghans and further applicants may also benefit from them. Other countries including Denmark, the Netherlands, and Sweden have pre-existing routes (or, at the time of compiling this report, the intention to create such routes) specifically for those Afghans who cooperated with the respective country’s national military or national interests, such as interpreters.

The majority of European countries have suspended returns to Afghanistan at present, either per official policy or on a de facto basis.

Countries including Belgium, Denmark, Luxembourg, the Netherlands, and Norway suspended decision making on Afghan protection claims, while Ireland is conducting reviews of all cases. Finland suspended the making of negative decisions, although positive decisions have not been suspended. Croatia and France did not implement a suspension, while Germany and Sweden recently restarted the processing of Afghan claims following the publication of the EASO Guidance in November 2021.