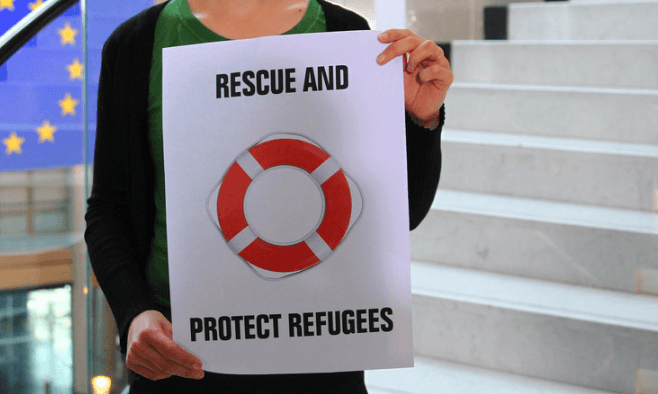 After a tense altercation between the Libyan coastguard and the vessel of a Spanish NGO during a rescue operation involving 218 migrants in the Mediterranean Sea on Friday, the ship concerned has been impounded in a Sicilian port, with the crew under investigation by the Italian authorities for “conspiring to facilitate illegal immigration”.

The captain of the ship, which belongs to Barcelona-based NGO Proactiva Open Arms, described how the rescue operation began in international waters 73 miles from the Libyan coast, after a general call from the Italian Maritime Rescue Coordination Centre. Although the MRCC named the Libyan coastguard as the authority responsible for managing the operation, the Open Arms captain reported that the crew proceeded with the rescue having encountered the migrants’ dinghy in a perilous situation and with no Libyan vessel in sight. According to a journalist on board the Open Arms vessel, the Libyan coastguards who subsequently arrived at the scene demanded that the migrants be handed over, while intimidating rescue workers and migrants by firing warning shots with their weapons and making threats of violence. Reports also describe migrants jumping into the water after a Libyan coastguard entered their dinghy. The Libyan coastguard has a different version of events stating that the Spanish NGO were “starting a contest with Libyan coastguards to rescue migrants,” and ”acted as if it was hunting preys [sic].”

After the eventual departure of the Libyan coastguard, the Open Arms vessel proceeded to Malta and then to the port of Pozzallo in Ragusa, Sicily, where the migrants disembarked on 17 March before being taken to the hotspot. The ship has been impounded in Pozzallo since 18 March. The ship’s captain and head of mission, along with the NGO’s general coordinator, are under criminal investigation due to the NGO’s refusal to transfer the rescued persons to the Libyan coastguard.

The investigation comes in an atmosphere of increasing suspicion on the part of the Italian authorities towards NGOs working in the Mediterranean. The Vice-President of SOS MEDITERANEE, now the only NGO conducting search and rescue missions in the area, has observed “a clear conjunction of the media and politics against search and rescue NGOs in Italy that is linked closely with internal political debates…we clearly observed a shift in the way the Italian society views these rescue operations. It has been quite difficult for the NGOs in general to cope with this.” After a controversial code of conduct for charity boats conducting rescues in the Mediterranean was introduced by the Italian government last summer, the rescue ship Iuventa operated by German NGO Jugend Rette was similarly impounded under suspicion of “activities facilitating illegal migration.” The court of Rome is due to issue its ruling on the seizure on 23 April.

The controversy comes in the same week that the EU’s naval mission announced its intention to rapidly expand its training programme of Libyan coastguards. Since 2016 the EU naval mission’s Operation Sofia has trained 188 Libyans, which according to the mission’s chief contributed to a sharp fall in the number of attempted Mediterranean crossings in the second half of last year.