Information Sheet: Measures in Response to the Arrival of Displaced People Fleeing the War in Ukraine 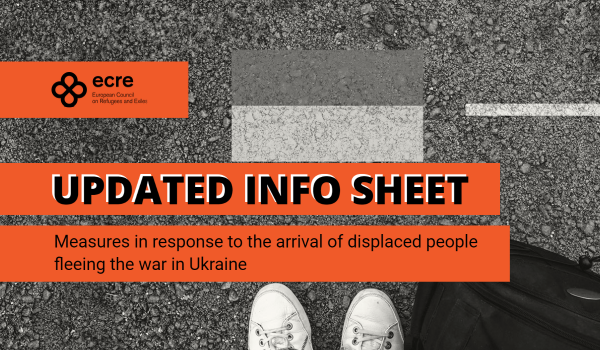 This week, Italy adopted a decree implementing the TPD which includes third-country nationals and stateless people who held permanent residence permits in Ukraine and are no longer able to return to their country of origin, however it does not extend to those on temporary or study permits. In Bulgaria’s implementation of the TPD it provides that individuals with foreign citizenship or statelessness who entered Bulgaria from Ukraine can explicitly state their desire for temporary protection. It is not clear if these applications will be granted automatically or if there will be further eligibility requirements. Croatia has intended to extend the scope of the TPD in its implementation decision by providing that anyone legally residing in Ukraine prior to 24 February 2022, who cannot return to their country of origin, is eligible alongside those who fled Ukraine before 24 February 2022 due to the worsening security situation. The Czech Republic has also extended protection to UA citizens who were present in Czechia prior to 24 February 2022 either with a short stay visa or without a visa. Germany has also acted positively to extend the scope of the TPD by applying it to those who were in Germany closely before 24 February 2022 and to third-country nationals who can prove they were lawfully present in Ukraine for a non-temporary purpose but did not yet have permanent residency.

However, despite the TPD’s provided choice for individuals to apply in the EU country of their choice there have been reports of UA nationals being rejected in Germany after showing a registration certificate from Poland. France additionally extended the scope in their ministerial order on TPD by family members of third-country national with valid permanent residence permits who are unable to return to their country of origin. The Netherlands recently announced detailed national measures which extend protection to UA nationals who fled after 26 November 2021, or who arrived in the Netherlands before and had resided on a residence permit or as an asylum seeker and to non-UA nationals who left UA after 26 November who were recognised as refugees or held a valid UA residence permit, and to family members of these groups. Portugal’s resolution on the implementation of TPD similarly extended eligibility to third-country nationals or stateless persons who were residents or had a long-term visa in Ukraine and whose return to their country of origin is not possible. Luxembourg similarly has chosen to apply protection to third-country nationals and stateless persons who were legally residing in Ukraine prior to 24 February 2022 and to those who have left since or shortly before this date for reasons regarding the conflict.

As Denmark had an opt-out of the TPD, the Parliament agreed on a Special Act for displaced people from Ukraine which is similar to the TPD but provides for a narrow interpretation, only applying to UA citizens and refugees recognised in Ukraine, with a possibility for beneficiaries of this residence to reunite with close family members.

The measures outlined in the information sheet are subject to change and will be updated weekly as the situation on the ground changes.