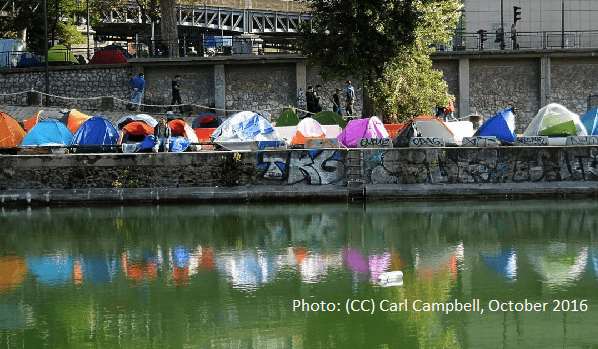 On 17 November French police dismantled a makeshift camp home to 2,400 people in the Paris suburb of Saint-Denis. Most residents where moved to emergency accommodation, but several hundred remained on the street with nowhere to go and exposed to police aggression. Aid organisations call the continuing evictions ineffective and urge the State to provide safe and sustainable accommodation solutions.

In the early morning of Tuesday, police have once again dismantled a makeshift camp in the outskirts of Paris. Located under a motorway in Saint-Denis, close to Stade de France, the camp had continuously grown since August, housing about 2,400 people at the time of the eviction. Most people had been staying in other makeshift camps before and settled in Saint-Denis following previous evictions in other parts of Paris. 70 buses were deployed to transfer those evicted to reception centres and emergency accommodation set up at sport halls across Ile-de-France. Doctors Without Borders (MSF) criticised the use of emergency shelters that offer only shared accommodation and no possibility for social distancing. A study published by the organisation in October confirms that people accommodated in emergency shelters across Ile-de-France were exposed to an increased risk of COVID-19 contamination. People were waiting until the afternoon to board the buses which did not provide sufficient space for everyone. By the end of the day, several hundred people were left behind on the street and police reportedly used tear gas to disperse those with nowhere to go.

The dismantling has been the 66th of its kind within the past five years in Paris, adding to an “endless and destructive cycle”, aid organisations said in a joint statement following the eviction. According to the call, 70% of people living in informal settlements are waiting for a decision on their asylum application in France, and should therefore receive suitable accommodation. Further, the organisations urge the State to provide “unconditional and sustainable access to accommodation, care, rights and information to be guaranteed for all persons, regardless of administrative status”.

Over the past months, aid organisations had repeatedly stressed the deplorable living conditions at the makeshift camp in Saint-Denis and called on authorities to provide a safe alternative. Corinne Torre, head of mission at Doctors Without Borders (MSF) France said “Everyone has just been left on the streets, without any back-up plan whatsoever, even though we’ve been alerting authorities [about the situation] for months now.” While most people in the makeshift camp where sleeping in tents, some were lacking even this basic form of shelter. Earlier this month, local authorities had installed ten washroom cubicles and six urinals after continued pressure by aid groups, but the sanitary conditions remained miserable amid a rapidly growing number of COVID-19 cases in France. The new lockdown imposed by the end of October had further accelerated misery, creating a “situation about to explode,” Torre said. Access to food was particularly affected as restrictions on movement across the city were imposed:  whoever tried to visit the normal food distribution points risked to be fined on breaking the lockdown rules. “People are hungry” emphasised an aid worker at Solidarité Migrants Wilson, a group that distributed meals at the camp three times a week.