Four years after tragedy, NGOs still call for proper investigation and the end of push backs in Spanish enclaves 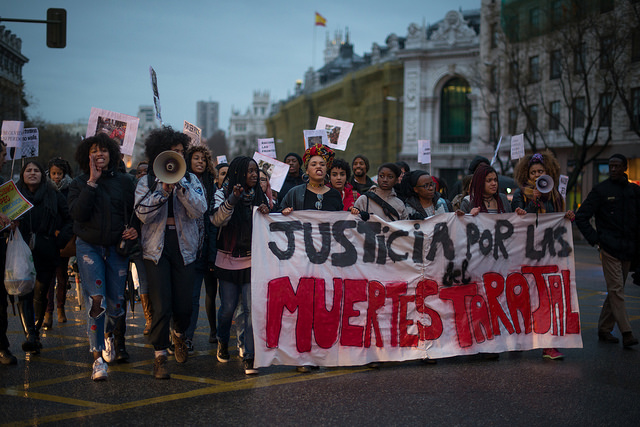 This week marked the fourth anniversary of the “Tarajal tragedy”, when a group of Sub-Saharan nationals who attempted to reach the Spanish territory by swimming towards the Tarajal beach in the Spanish enclave of Ceuta was violently repelled by the Spanish Civil Guard. The guards used rubber bullets and tear gas to push them back, resulting in at least 14 deaths. 4 years later, civil societies organisations such as ECRE’s member CEAR and Amnesty International still call for a proper investigation in that case and for the end of push backs in the Spanish enclaves.

A tribunal in Ceuta has recently archived the case for investigating the incidence in Tarajal, which was considered by different NGOs as a step towards impunity. The Spanish authorities also failed to attend the needs of the victims’ families who still wait for their identification. According to Estrella Galán, CEAR’s Secretary General, “there was a lack of accountability and impunity when dealing with this tragic incident, which brought us a sense of powerlessness and shame“, and “as long as push backs are not prohibited, what happened in Tarajal can happen again”.

This week was also the deadline to submit amendments to reform the “Organic Law on the Protection of Public Safety”, the contested legislation which provides the national legal basis for the push backs, despite its inconsistency with international law and human rights standards.

In October 2017, the European Court of Human Rights (ECtHR) found that Spain had breached its obligation not to carry out collective expulsions in the case of a Malian and an Ivorian national who were summarily returned to Morocco upon descending from the fence in the Melilla enclave. The case has been recently referred to the Grand Chamber of the ECtHR, which will rule on the case.