EU Southern Borders: Deaths Off Spain and Morocco as Amnesty Denounces the Failure to Ensure Justice for Melilla Victims, More Than 500 Survivors Disembark in Italy, Frontex Facilitates Interception and Return to Libya 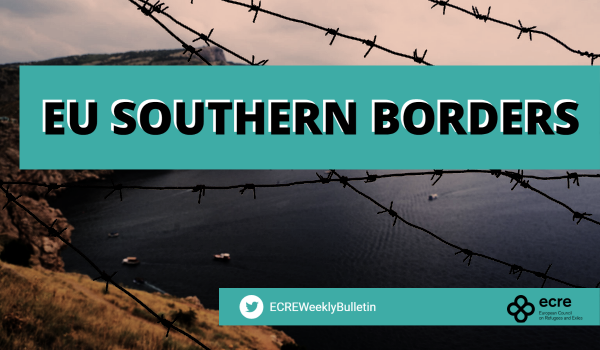 Two deadly tragedies off Spain and Morocco as new report from Amnesty International denounces the failure by authorities in both countries: “to provide truth and ensure justice for at least 37 sub-Saharan African people killed and 77 others still missing”. More than 500 survivors rescued by NGO operators have been allowed to disembark in Italy. New investigation reveals facilitation by the European Border and Coast Guard Agency (Frontex) of interceptions and returns to Libya pointing to complicity in human rights violations.

On 10 December, the NGO Caminando Fronteras reported of a deadly shipwreck off Morocco when at least 49 people lost their lives and 56 people including three babies remain missing after attempting to reach the Canary Islands. Just days before, on 8 December, Spanish authorities confirmed the recovery of the bodies of three people off the coast of Murcia in Southern Spain losing their lives after departing from Algeria. Reportedly, another six people were rescued. In October, The International Organization for Migration´s (IOM) Missing Migrants Project (MMP) reported: ”On the West Africa-Atlantic route to the Spanish Canary Islands, 1,532 deaths were documented in the reporting period, a figure already higher than any two-year period since IOM began documenting deaths in 2014”. And according to MPP: “More than 2,000 migrant deaths and disappearances have been recorded on the Western Mediterranean since 2014, with the vast majority involving shipwrecks on the overseas route to the Spanish mainland. However, the land crossings to the Spanish enclaves of Melilla and Ceuta are also hazardous, with several dozen deaths recorded by MMP attributable to violence, sickness and lack of access to health care.  In several cases, accidental and violent deaths have occurred at the border fences of these Spanish enclaves linked to attempted crossings”.

Ahead of the six-month anniversary of the tragedy at the Melilla border crossing, Amnesty International released a report denouncing: “The abject failure of Spanish and Moroccan authorities to provide truth and ensure justice for at least 37 sub-Saharan African people killed and 77 others still missing following the deadly events“. Secretary General for the organisation, Agnès Callamard stated: “the Spanish and Moroccan authorities continue to deny any responsibility for the carnage at Melilla. There is a growing mountain of evidence of serious and multiple human rights violations, including the unlawful death and ill-treatment of refugees and migrants and to this day the lack of information as to the identity of the deceased and the fate of the missing”.

After a series of rescues on the Mediterranean, Humanity 1 operated by SOS Humanity and Geo Barents operated by MSF Sea carried more than 500 survivors.Followingseveral medical evacuations and survivors stuck at sea for days in harsh weather conditions, both vessels were allowed to disembark in Italy on 11 December. 261 survivors including 23 children under 14 and over 60 unaccompanied children from Humanity 1 disembarked in Bari and 248 children, women and men rescued between 4 and 6 December aboard Geo Barents disembarked in Sarlerno. Italy’s interior ministry said the decision to allow the two boats to disembark was down to bad weather conditions rather than marking any change in Italy’s anti-migrant policies. On 15 December, Alarm Phone reported of a deadly shipwreck off Tunisia, stating: Tunisian authorities have told us on the phone that at least 4 people died when their boat sank near Sfax. Authorities claim that 26 of the 30 people on board were rescued. Our solidarity and condolences to the families and friends”. IOM statistics reveal that at least 1,362 people have died or gone missing on the Central Mediterranean Route in 2022 so far.

A nurse on Humanity 1 stated that survivors who had been through Libya bore “signs of torture”, including “stab wounds, burns from cigarettes, broken ribs due to repeated beatings, signs of sexual abuse”. She further explained that “Men were also raped and gang raped, “including with firearms, just to take away their dignity”. According to a report from Human Rights Watch (HRW) and Border Forensics, more than 32,400 were captured at sea and forced back to Libya by Libyan forces in 2021. The organisations state: “Our analysis reveals that almost one third of these interceptions were facilitated by intelligence gathered by the European Union border agency, Frontex, through aerial surveillance”. The announcement of the report points out: “The use by the EU’s border agency, Frontex, of aerial surveillance to enable the Libyan Coast Guard to intercept migrant boats, knowing that migrants and asylum seekers will face systematic and widespread abuse when forcibly returned to Libya, makes Frontex complicit in the abuse”. On Human Rights Day on 10 December, protests were staged by NGOs and asylum seekers outside the headquarter of the UN Refugee Agency (UNHCR) in Geneva. “We came together with civil society to give a voice to the people who have been silenced for years,” stated David Yambio who was “repeatedly detained and abused” in Libya. Yambio further noted: “Their rights have been violated and the UNHCR has been watching passively”.