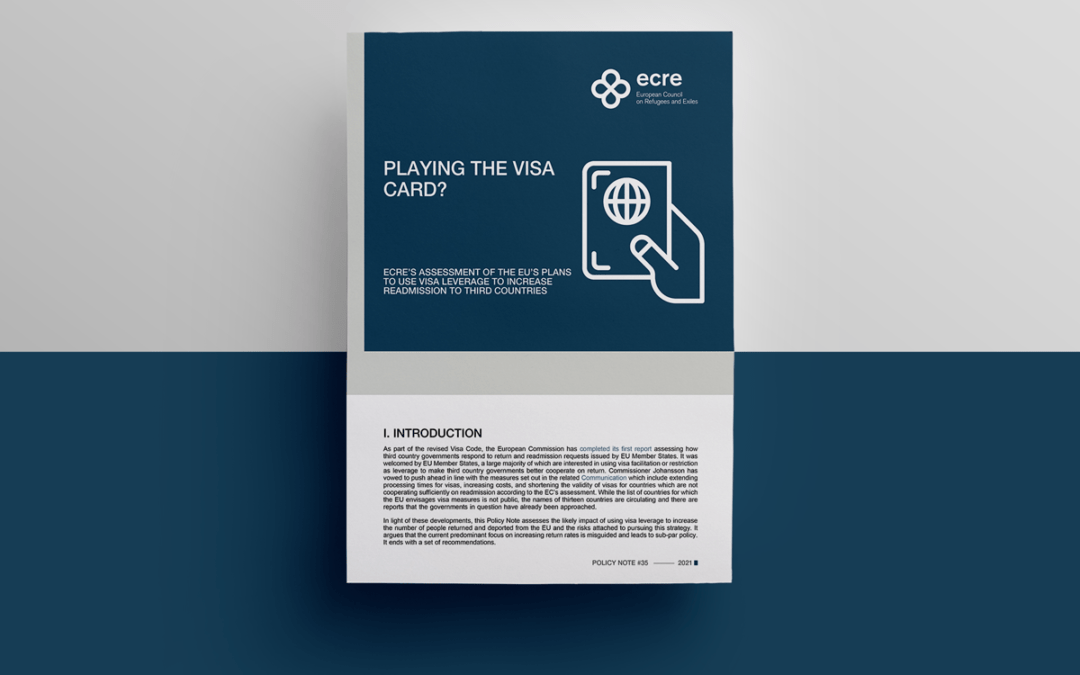 ECRE has published a Policy Note which assesses the likely impact of using visa leverage to increase the number of people returned and deported from the EU and the risks attached to pursuing this strategy.

As part of the revised Visa Code, the European Commission has completed its first report assessing how third country governments respond to return and readmission requests issued by EU Member States. The report was welcomed by EU Member States and Commissioner Johansson has vowed to push ahead in line with the measures set out in the related Communication which include extending processing times for visas, increasing costs, and shortening the validity of visas for countries which are not cooperating sufficiently on readmission according to the EC’s assessment.

The Policy Note assesses past evidence of linking the applicable visa regime to readmission which does not provide a clear picture. While it may have led to the conclusion of readmission agreements, this in turn has not resulted in a higher return rate. There are cases where visa leverage has proved harmful to the overall relations with the country concerned, such as for France and countries in Northern Africa. The extent to which findings from the Western Balkans can be applied to other context where the prospect of visa-free travel and/or eventual accession to the EU does not exist is limited. Research suggests that restrictive visa regimes tend to decrease return rates as closure of regular travel opportunities increases the desirability of remaining in Europe. Given all these uncertainties, it is difficult to assess the likely impact of visa restrictions or liberalisation on return numbers.

However, the risk attached to pursuing this strategy for the affected individuals, as well for the EU’s overall relations with the country or wider region are pertinent. While the list of countries for which the EU envisages visa measures is not public, the names of thirteen countries are circulating. Amnesty International’s The State of World’s Human Rights 2020/2021 report details human rights violations in the vast majority of these countries. DRC and Iraq are even included in the last UNHCR’s Global Trends report among the world’s top ten displacement situations; the protection rates for certain of the countries is high, notably Eritrea but also Iraq, Iran and Somalia.

The Policy Note elaborates that the usage of visa leverage is part of the overall disproportionate focus on return and that this together with the fixation on the effective return rate, i.e. the percentage of those actually returned of those who receive a return decision, is misguided. It argues that the focus of EU return policy should shift from increasing return numbers to ensuring that clear, transparent and fair rules for return are implemented across the EU as per the Preamble of the Return Directive.