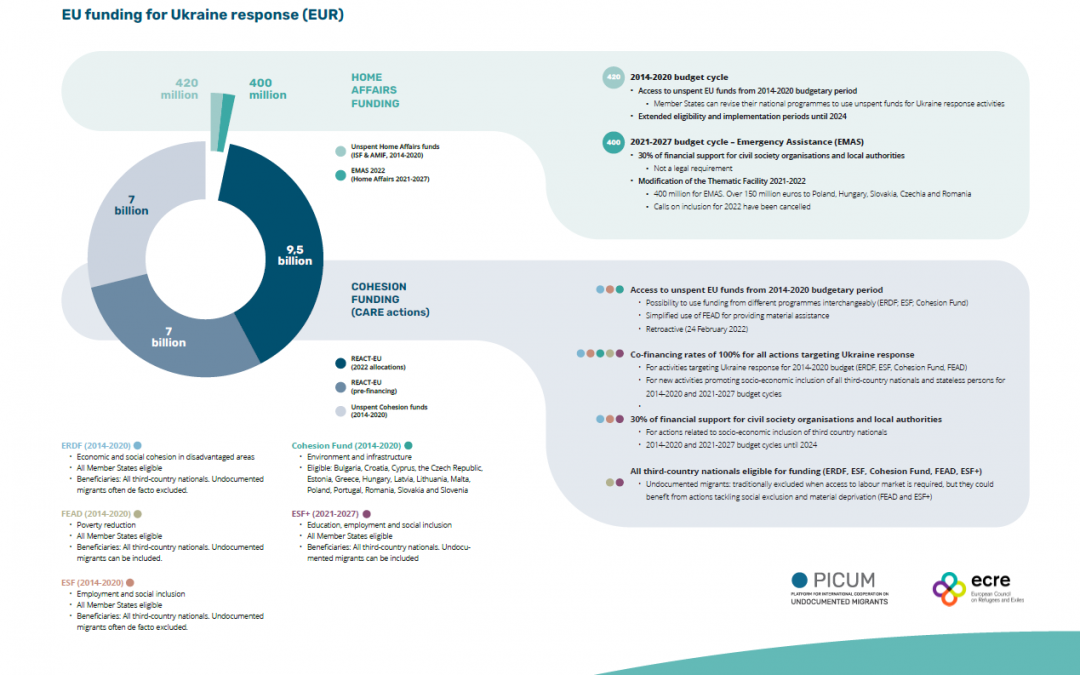 ECRE and PICUM have published a joint policy note and factsheet that analyses the European Union financial response to support displaced people from Ukraine inside the EU.

Since the invasion of Ukraine, more than 7.5 people have fled to the EU, including over 1.5 million to Poland, Romania, Slovakia and Hungary. In order to support the EU financial response to the increasing needs, the European Parliament and Council have agreed on several legislative measures targeting cohesion policy (CARE initiatives) and Home Affairs funds. The primary objective was to encourage Member States to cover the reception, accommodation and integration costs of hosting people from Ukraine, using the unspent resources from the 2014-2020 budgetary period. Additional resources were allocated by advancing payments from the already assigned tranches of REACT-EU money and a smaller amount through emergency assistance under the current AMIF and BMVI programmes.

The measures have created important precedents on earmarking 30% of the resources for civil society, and added an important focus on long-term socio-economic inclusion of third country nationals through structural cohesion funds. In parallel, the approach gave impetus to a coordinated response at EU level via the creation of the Solidarity Platform bringing together all interventions related to Ukraine and including a specific component on EU funding.

Nevertheless, the measures do not release any new money and quantifying the amounts that will be available is at this stage almost impossible. Despite the European Commission’s announcement that the legislative measures would free over 17 billion euros, those figures are based on an estimate as to the remainder of the Member States’ allocations for the previous budget period, and not on the actual amounts still available. In some cases, such as in Germany, there was no money left from cohesion policy or AMIF funding and the delay to programming for the new financial period increased the risk of funding gaps. Since the adoption of the measures, there was only one official communication from the Commission on their implementation. As of June 2022, only 1 billion euros of cohesion funds was indicatively re-programmed by 10 Member States as a result of the CARE initiatives.

Additionally, part of the resources to finance emergency support to Member States from the European Commission came at the expenses of other policy areas, which were deprioritised. In fact, in order to provide immediate liquidity to Member States bordering Ukraine (Poland, Hungary, Romania, Slovakia and Czechia), the European Commission cancelled four calls on inclusion from its work programme for the year 2022.

This policy paper provides an analysis of the measures and a preliminary assessment of implementation. It takes stock of the lessons learnt and ends with a set of recommendations for policymakers.