ECRE Editorial: EU Displacement Response Turned Upside Down in Ukraine and So It Should Remain 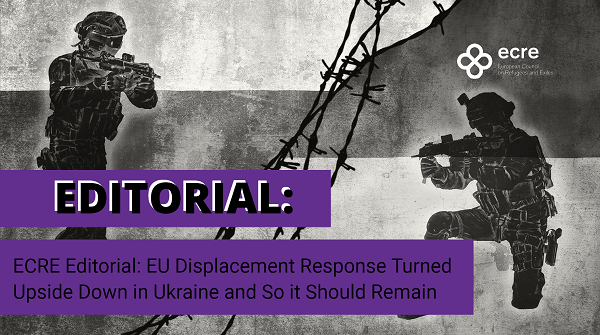 The EU’s response to the large-scale arrival of refugees from Ukraine has so far been exemplary and just as well: the displacement dimension of the crisis is intrinsically linked to the security outcomes as ECRE has highlighted from the start.

The challenge now will be to maintain the positive response in the long-term, essential for both humanitarian and – again – for security reasons. Last year, before the Ukraine invasion reminded Europe of what a crisis really is, the focus of asylum and migration policy was Belarus and the “weaponisation” of people to further geopolitical ends. The concept was only slightly sanitised with the European Commission’s rendering of it as “instrumentalisation”, which is at the heart of the mini-package of Council Decision, Instrumentalisation Regulation and (some of) the amendments to the Schengen Borders Code (SBC).

ECRE fervently opposes this set of proposals for many reasons, summarised in two policy notes published this week on the proposed Regulation and the SBC amendments respectively. Underlying ECRE’s concerns is the sad fact that states manipulate refugees all the time and have done so throughout history, for internal and external political and security gains. The response to such efforts to use people, to instrumentalise them, should be to reinforce international protection systems not to dismantle them, and this takes us back to the Ukraine response. The challenge now is to maintain unity, calm and effectiveness management of the displacement provoked by the invasion. Above all, that is necessary to minimise human suffering but it remains the case that any other approach – panic and conflict among the member states on refugee support – will give a boost to Putin, given the destabilising effect it would have.

It will be an immense challenge to continue to manage the extraordinary (in global and historical terms) number of arrivals but Europe can and must do so. ECRE has detailed some of the ways the EU can assist in its updated advocacy messages on the crisis (here), and four overarching recommendations emerge to support transition to a long-term positive response.

First, Member States must avail themselves of EU, international and civil society support especially at the point of registration and first reception. This is a massive humanitarian response. To oversimplify, given the economic situation in Europe, the cluster system is not being used; the states are in the lead in the response and international actors are supposed to unite behind them. The capacity in the Member States most affected varies hugely, however, and in some cases they need to be requesting the EU agencies’ involvement and conceding more space to UNHCR and to INGOs. That does not mean that the states do not have the primary responsibility to respond, rather, it means that they should be requesting support and contracting out parts of the response.

The situation is better than in many displacement contexts. Above all, there is no shortage of funding. Private foundations and individuals have provided millions of Euro to relief efforts, supporting UNHCR and civil society with an unprecedented injection of funds. For the states, there are huge amounts of EU funding at their disposal. This includes funding under AMIF and the new CARE funding stream in the Cohesion Funds and potentially REACT-EU funding. Member States need to already adjust their AMIF national programmes and to engage with civil society on assessing the immediate and medium-term needs country by country. At the same time, the EU must keep control over a large amount of this funding. It needs to be able to respond through funding directly not just via Member States, given the well-documented challenges of absorption capacity and poor management of funds in some Member States, not to mention rule of law conditionality which means that some Member States are currently not eligible for certain EU funding from the current MFF. That hasn’t changed and nor should it, as most political groups argue in a recent statement. They should not be “let off” because of their – for once – positive response to refugee arrivals. Respect for the rule of law and basic principles of financial management are just as important in a crisis situation.

Second, the response needs to rapidly switch to focusing on inclusion – integration into EU societies – as soon as people are registered. The great advantage of triggering the Temporary Protection Directive is that almost all the people arriving from Ukraine have international protection immediately. It accelerates the process by years: rather than extensive efforts being ploughed into accessing, navigating and providing asylum procedures, these refugees have a status automatically (if only it were so for all). Not only that – the content of protection, the rights attached to the status, is solid, encompassing the right to employment, education, housing, assistance, family reunion etc (and again the Refugee Convention would tell us that this is should be the case for all). Thus, the challenge is inclusion through access to these rights.

ECRE is monitoring the implementation of the TPD and will continue to assess the state of play with provision of these rights across the member states, the ECRE Info Sheet, updated on a weekly basis, provides an overview here. The general principle, professed by the EU and at least some of the Member States, of “integration from day one” has never been more important.

The situation in Europe is far more conducive to an effective response than in other countries that face large-scale arrivals. There is a whole infrastructure of institutions, agencies, community organisations and private sector actors who are specialised in supporting integration and social cohesion, starting from ministries of employment, social affairs, etc and going all the way down to grassroots associations and faith communities. Many of them are also adept at managing EU funds and engage in EU networks. It is therefore a question of mobilising and massively scaling up support to these sectors.

A major theme has been the different response of governments compared to previous movements of displaced people, for example, the shameful response to Afghans fleeing the Taliban (see the JHA statement at the time – a new low), or the measures to prevent arrival of Syrian refugees, epitomised in the infamous EU-Turkey Deal. It is clear that what is considered a “massive influx”, “unmanageable”, a crisis or a threat depends unfortunately on who the refugees are – where they come from, the colour of their skin and so on. In the long term, the deep biases in asylum systems must be addressed

Nonetheless, we should also recall that there were positive responses from the public, from local governments – cities, regions – and from professionals to previous refugee movements, including in 2015. The challenge is to maintain that into the medium term, while people continue to arrive because unfortunately most displacement crises are long-term; conflicts last decades and the average length of displacement of a refugee is over 18 years.

The preferred durable solution for the people themselves is voluntary return but so often it is not possible. Here, the course of the war is highly unpredictable, can anyone really say if this going to last five weeks, five months, or five years? Thus, public opinion has to be shored up. It is important that politicians continue with the can-do, open approach; it is also important to involve as many parts of society as possible, and to ensure direct contact between host communities – widely writ – and refugee communities. It is also important that asylum systems as a whole continue to function – again not just because there are many people from other places who also need protection. Political crises, dysfunction, and another round of European asylum panic would be highly unhelpful, as would social tensions generated by unfair treatment of asylum applicants and refugees. At EU level, devoting time and resources to legislative reforms that don’t improve the legal framework and would in fact make it considerable harder to respond to a crisis such as the one currently unfurling, seems even more unwise than it did six months ago.

Closely related to maintaining public support is the fair sharing of responsibilities across the EU. Again in stark contrast to the situation of other refugees, the EU’s response allows something close to free movement across Europe and the right family reunion is being realised, meaning that people are distributing themselves across the continent, rather than being forced to remain in the country of first arrival. This greatly enhances integration prospects. The sheer number of people arriving means that the usual solidarity debate is already emerging. Despite the widespread and extensive Ukrainian Diaspora in Europe, there are many people arriving who don’t have family in an EU member state. Transfers in the sense of allowing people to move will not be enough – at some point, mandatory relocation may be necessary. To hear requests for support from countries who not only refused to relocate people but even went before the Court of Justice to challenge the relocation programmes provokes high levels of irony; nonetheless, their pleas should be met. It can be hoped that they remember the support when the solidarity debate kicks off again in future Council discussions. The solidarity platform is the tool for this and putting in place a strong system of relocation pledges and related mechanism as soon as possible, while governments are open, might help avoid a divisive battle down the line.

As an acute observer and sometimes contributor to Europe’s “refugee crises”, President Putin will be well aware of the potential for displacement to become a strong weapon to be used to his advantage. As with all manipulation of refugees, it is not the people themselves that are a threat, but rather the interaction of the political response in Europe and the context of the conflict. The time consumed, the distractions, the divergence of resources into deterring and deflecting people, the infighting, the tit-for-tat efforts and lack of solidarity are all factors that will have an impact on the security side should a political crisis on displacement unroll; the risk needs to be contained through continued positive response.