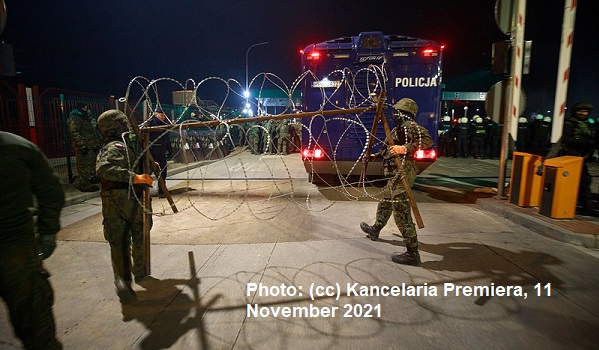 As its President forewarned, the European Commission this week launched a proposal to respond to events at the EU border with Belarus. It was met with exacerbation and bafflement by journalists and fury by political groups in the European Parliament. For civil society trying to respond to events on the ground, including NGOs, the media, lawyers and faith-based groups, the proposal is profoundly frustrating.

The documents presented include a Joint Communication and a proposal for a Council Decision to put in place temporary emergency measures for the benefit of Latvia, Lithuania and Poland. The Communication and the now de rigueur lengthy Explanatory Memorandum and long repetitive Recitals that are part of the Decision justify the use of emergency measures through reference to “instrumentalisation of migrants” and contain extensive hyperbole on the security threat that people supposedly pose. The important legal substance is in just two pages, Articles 1 to 5 of the proposed Council Decision which would allow Member States to derogate from certain provisions of EU asylum law. (There are also Articles on operational response which do not add much to what is currently possible).

ECRE’s detailed comments will be published next week. In short, under the emergency measures to be in place for six months initially derogations would allow the three Member States to delay registration of applicants for up to four weeks; to house people in centres at the border with only basic needs met for sixteen weeks (likely to be detention, although this is not specified); to apply truncated procedures during that time which could be inadmissibility or in-merits asylum procedures; and to restrict appeal rights in these cases. The usual exemptions of vulnerable groups are not foreseen, not even for children, with only those in an acute state of health to be transferred elsewhere.

ECRE is concerned to see measures based on border detention and application of sub-standard procedures, which mirror those proposed in the Pact. As highlighted in a recent statement, here, ECRE and other civil society organisations are calling instead for enforcement of the law. While condemning the actions of Belarus, it remains the case that Member States have been allowed to commit violations at the borders with impunity and have introduced legislation which is in clear conflict with EU law, and which is allowed to stand.

The legal analysis will follow, however, beyond the content of the proposal, the political strategy underlying the approach deserves some consideration. It dates back to the previous Commission, is also manifested in the Pact, and is riddled with contradictions.

Contradiction One: Do what the Member States want but don’t do what they want.

Even overlooking the central point that it is not the job of the Commission to “do what the Member States want”, the contradiction leaps out because the Member States don’t actually seem to want these proposals. The three countries concerned have already spoken out against them; Member States are fighting over the Pact; and the 2016 proposals met with anger and annoyance from the Member States. Thus, it seems that compromises are made when it comes to EU law and values to no useful purpose.

There is no doubt that the positions of Member States (or at least their interior ministries) are awful on these issues, as ECRE does not hesitate to say. To listen to presentations from ministers is a hair-raising experience; by all accounts, JHA Council is filled with toxic and xenophobic rhetoric; currently, Member States are clamouring for the “legalisation of pushbacks” which was behind the Council request that led to this proposal (and which may still be coming in the Schengen amendment). But in this hostile context, measures designed to appease them will never be enough. The supine strategy of “doing what the Member States” want needs to be replaced.

The second contradiction is the suggestion that to save the right to asylum it is necessary to restrict the right to asylum. It follows on from the above argument that states will be more likely to respect the law if the standards are weaker.

Given that one of – if not the – major problem facing refugees in Europe is denial of access (to territory and to an asylum procedure) the argument is made that access will be improved if obligations on Member States are reduced. As at other borders, in the Eastern borders crisis, the evidence of “pushbacks” is manifold. The argument is then applied: if Member States are allowed to detain people and apply a rapid asylum procedure, then they will be more likely to “allow” people to enter the country (i.e. to respect their binding legal obligations), especially when combined with semantic fictions of non-entry.

There is no evidence, though, to support this argument. Indeed, the experience from Greece tends to suggest the opposite: Member States do not want to be managing border detention centres with additional use of border procedures. They don’t want to install physical and judicial infrastructure in border regions, not least because local populations are strongly opposed. Thus, measures based on the border detention/border procedure approach are more likely to generate pushbacks than to dissuade Member States from using them.

The proposed delay to registration may also make violations at the border more likely, given the risks that arise before people have the increased protections following registration. It should also be noted that the proposal could have strengthened access but a choice seems to have been made not to so:  the Recitals include welcome language on the need for “effective and genuine” access to an international protection procedure, and points of registration are designated and open (reflecting the better elements of the ND and NT line of cases). However, these provisions do not make it into the Articles, only the reference to the need for information provision is there in Article 5.

All factors considered, the underlying objective appears to be deterrence rather than support for access. Rather than damage limitation, the proposals are damaging. There is no reference to the violence and violations being meted out by the states. Instead, the proposal presents them as the victims of violence by the people in question (see the particularly egregious Recital 25). As side note, the word “people” is never used; “they” are of course “migrants” or “third country nationals”.

The third contradiction at play is to seek legal solutions while at the same time efforts are not made to enforce the law in place. This surely undermines the prospects of the possible new laws being respected if they are ever adopted. That is one of the challenges of the legislative reform packages of 2016 and 2020. Here, the contradiction runs deeper. First, the legal basis for allowing derogations is questionable. It does seem that parts of the Commission seem to spend a lot of time looking for legal bases that allow Member States to derogate from the law, often at the instigation of the Member States, rather than trying to ensure compliance.

Another dubious element is that the heart of the Decision is measures that are contained in the Pact legislative proposals, i.e. the content is the same as the proposals currently being subject to legislative scrutiny by the co-legislators. A Council Decision can be agreed QMV, a majority of the Member States, with Parliament being consulted. Thus, the proposal could be construed as an attempt to bypass normal legislative processes. There might be emergency situations in which that could be justified, but given the measures and the context, despite all the rhetoric about security, this is not one.

Overall, this looks rather like another stage in Member State and Commission efforts to use the actions of Lukashenko as the latest pretext for undermine the right to asylum in Europe, and in particular, to deny the right to asylum to those who arrive at the borders, regardless of the reasons why they are there, and despite the principle that people should not be penalised for the manner of their arrival. Given that the numbers are small (compared to other displacement crises) and the situation is under control, it is the “Instrumentalisation” that is used to justify invocation of Article 78 (3) TFEU on emergency measures. The reality is that states “instrumentalise” people all the time – historically, traditionally, currently. It is one of the reasons we have human rights law in the first place – to balance the rights of people and the interests of states. In contemporary geopolitics, all kinds of dubious state (and non-state) actors “instrumentalise” (use, manipulate) refugees and other displaced people against Europe because it is so easily done. The next stage will be the amendment to the Schengen rules and attempts to render permanent derogations using the concept of instrumentalisation.

Here, while the situation results from a tense conflict with Belarus, that is no reason for weakening the right to asylum in Europe, and the people themselves are not a security threat. Calm management, combined with continued pressure on Belarus and political, diplomatic operational, and humanitarian initiatives would have been a better way to respond to the provocations from the other side, Belarus and its allies. As the Joint Communication says, they are cruel. It could add that so are we.