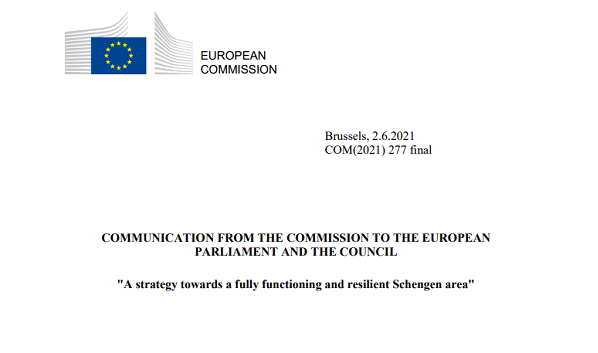 This week, the European Commission published A strategy towards a fully functioning and resilient Schengen area and a proposed revision of the Schengen evaluation and monitoring mechanism

The Schengen strategy sets out key objectives of the European Commission in addressing challenges within the Schengen area, most notably the introduction of internal border controls by Member States. It proposes a series of measures to be taken, including also a long list of activities to be carried out in cooperation with third countries. As part of the Strategy, the European Commission announces that it will propose a revised Schengen Borders Code and organize another Schengen Forum before the end of 2021. Annual ‘State of Schengen Reports’ should be prepared as well.

The revised Schengen evaluation and monitoring mechanism (SEMM) proposes changes to the way in which Member States’ application of the Schengen acquis is assessed. The process remains a peer-to-peer review system by which experts from Member States assess and evaluate each other. However, specific suggestions to strengthening the mechanism’s ability to assess compliance with fundamental rights have been proposed. This includes increased prominence of risk analysis produced by the Fundamental Rights Agency, particular training for evaluators on fundamental rights and the possibility for the evaluation to consider evidence provided by third parties.

In addition, the European Commission proposes to increase the amount of unannounced visits to EU Member States and remove obligations for prior notifications. Several suggestions should lead to faster adoption of evaluation reports and related recommendations. In support of transparency and quicker administrative processing, evaluation reports should no longer be treated as ‘EU restricted’ by default.

With this proposal, the European Commission reflected several of the recommendations of its own review of the SEMM as well as a study commissioned by the European Parliament to which ECRE contributed. The Council, which will be the main legislator on the proposed revised mechanism, has adopted its positions on the reform in April 2021.