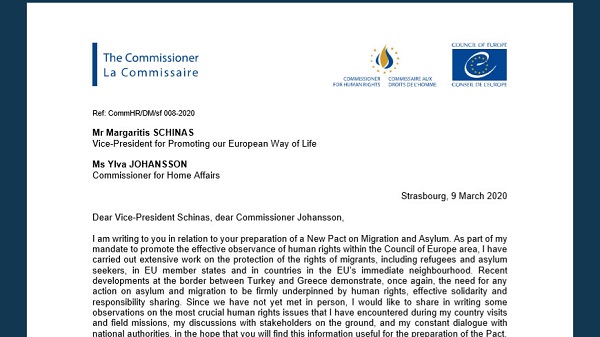 The Council of Europe Commissioner for Human Rights, Dunja Mijatović published a letter addressed to Vice-President Schinas and Commissioner Johansson in which she lists what she considers the most pressing human rights issues that the Pact on Asylum and Migration needs to address.

The letter criticizes the lack of overall preparedness and necessary coordination in reaction to an increase in the number of people arriving which has led to humanitarian crises in many European countries. It argues that renewed efforts are needed to address these emergencies. It also sets out that the New Pact should ensure adequate search and rescue operations in the Mediterranean, and highlights the detrimental impact of withdrawal of state-led search and rescue operations as well as restrictive measures on private ships. The Commissioner urges a more predictable system of responsibility sharing for people rescued at sea, relocation and family reunification to foster solidarity between EU Member States. In addition, the letter calls for an expansion of safe and legal routes to Europe.

In view of the envisaged cooperation between the EU and third countries, the Commissioner warns that transparency and accountability should be increased to assess the human rights impact of potential external action through the introduction of human rights risk assessments, risk mitigation strategies and increased public scrutiny.

To combat pushbacks and ensure access to asylum, the Commissioner recommends that independent monitoring mechanisms are established and strengthened and that the Pact supports a human rights compliant approach to border management which ensures access to asylum.

The letter highlights the trend of increased use of immigration detention and the need to invest in alternatives to detention. It highlights the work of the Council of Europe Steering Committee on Human Rights (CDDH) on the legal and practical aspects of effective alternatives to detention. The Commissioner expresses her support of the conclusion of the UN Committee on the Rights of the Child that the detention of children, on account of their or their parents’ immigration status, is never in the children’s best interests.

Finally, the Commissioner raises the issue of closing space for civil society, increasing harassment and criminalization of organisations supporting asylum seekers, refugees and migrations which should be addressed by the Pact.