Belgium: Failure to Deal with Persistent Reception Crisis is “Attack on Rule of Law” Human Rights Institutions Say, Situation in the Building of Palais des Droits is “Worse than that in Libya’s Camps” Underline NGOs As Authorities Find No Solution 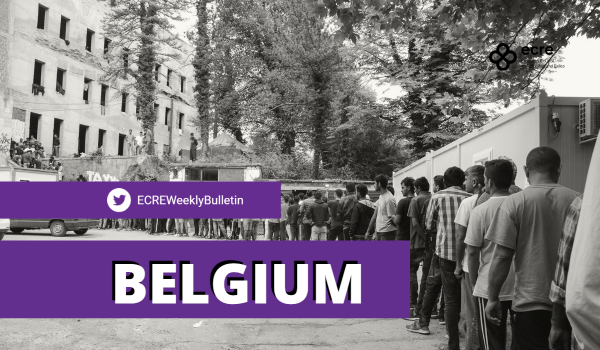 Five human rights institutions as well as Commissioner for Human Rights urged Belgium to ensure accommodation to asylum seekers and respect its international obligations. International protection applicants continue to endure deplorable conditions in the squat of Palais des Droits as authorities continue to deflect from responsibilities and lack sustainable solutions to the ongoing reception crisis.

In a joint communication from December 2022, five human rights institutions sounded the alarm bell about the Belgian authorities’ failure to deal with the persistent reception crisis, as people continue to be left in the streets of Europe’s capital, Brussels. The institutions said that the situation is “unacceptable”, adding that this failure is an attack on the rule of law, and urged the federal government to put an end to this ongoing crisis and ensure respect for its international obligations. Furthermore, they jointly formulated a set of recommendations that could be implemented in the short term and long term including establishing emergency reception facilities, registering all asylum applications under humane conditions and running an immediate assessment of vulnerabilities during the registration process. In the meantime, Commissioner for Human Rights, Dunja Mijatović, addressed a letter to Belgium’s State Secretary for Asylum and Migration, Nicole De Moor, expressing her concerns about the current situation of asylum seekers in Belgium”: Mijatović, pointed out that: “A lack of available accommodation in reception facilities and reported delays with the registration and processing of asylum applications have serious consequences for the human rights of asylum seekers, including their right to health and their access to shelter and other basic needs”. While welcoming the government’s decision to open additional reception centres and increase staff, the commissioner called on Belgium to ensure accommodation and material assistance for asylum seekers.

As a result of the crisis, international protection applicants had to shelter themselves in unofficial reception centres or squats such as the building of Palais des Droits in the neighborhood of Schaerbeek in northern Brussels, where more than 1000 people are living in deteriorating conditions including overcrowding, lack of hygiene and heating and infectious diseases. While NGOs say that the situation in the squat is ‘worse than that in Libya’s refugee camps’, a ministerial spokesman told Le Soir that the situation is “out of control” after the death of one of the residents on the eve of Christmas. Refugee-support NGOs blame the resident’s death on the “deplorable” conditions in the squat. Meanwhile, De Moor said that she is “tired” of implications that she does not want to tackle the situation in the squat but fell short of presenting a solution. An article published by De Standaard reads: “Everyone seems to agree that the worrying situation must end as soon as possible. But the question of how this should be done – and above all: who is responsible for this – starts with the question of who exactly are the residents”.

NGOs present in the building such as the Red Cross and Médecins Sans Frontières (MSF) say that the majority of the residents are asylum seekers who should be entitled to reception during their asylum procedure, but the Cabinet of De Moor says that there are also many homeless people whose reception fall under the competences of the Brussels Region, adding that even if it was confirmed that the majority of the residents of the building are asylum seekers, they would not be able to leave immediately. As the Belgian government continues to deflect responsibility, 24 minors were reported missing as a consequence of the “mismanagement around the reception crisis and failure to find solutions”. While 24 is already an alarmingly high number, the reality is probably much worse, experts and aid organisations believe. Meanwhile, a pregnant asylum seeker, about to give birth, was denied healthcare at the emergency department of UZ Brussels hospital because she didn’t have health insurance. “This is also a consequence of the reception crisis”, says Thomas Willekens from ECRE member the Flemish Refugee Action, adding that the woman would have been left out in the street if the council hasn’t found her accommodation.