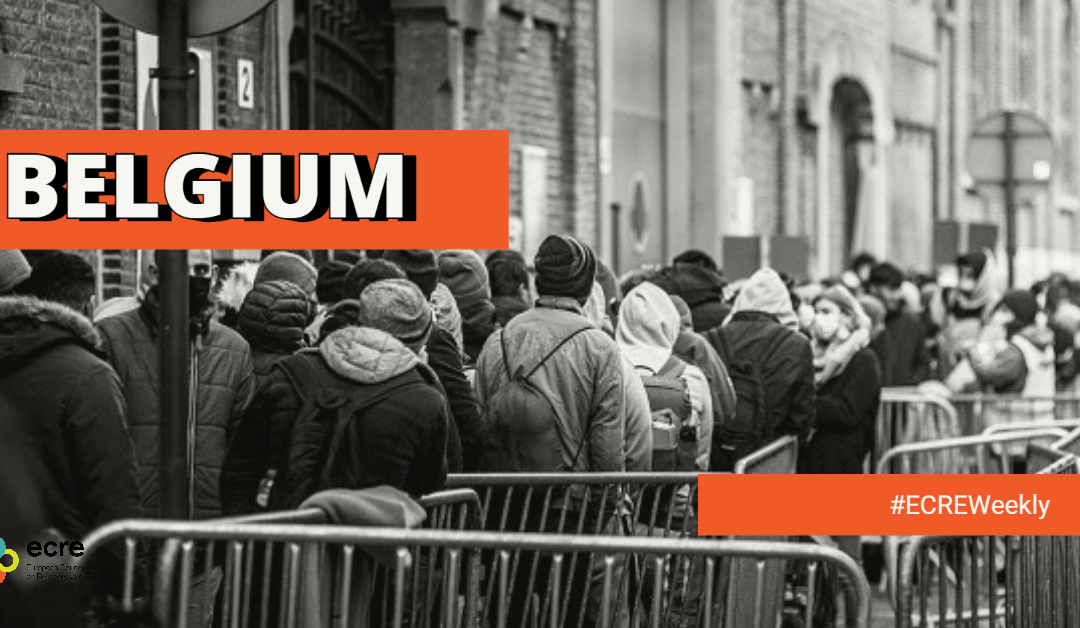 “Unacceptable” asylum and reception conditions in Belgium continues to leave thousands of people including vulnerable groups in the streets of Europe’s capital. The European Court of Human Rights (ECtHR) applies interim measure for the second time in the last few weeks requiring the Belgian authorities to provide accommodation. State Secretary for Asylum and Migration, Nicole de Moor says that everything has been done to provide more reception places but “disproportionate influx” is to blame for ongoing problems.

Europe’s capital continues to lack the political will to solve the long-standing reception crisis that has been leaving thousands of people in the streets and denying them the right to apply for asylum. Children, families and single men are forced to find refuge on the sidewalks of Brussels streets for months. “They [Belgian officials] haven’t given us anything to camp in and we don’t have shelter. We are facing problems with clothes and wearables and every authority we go to, they tell us that there is no place,” an asylum seeker from Afghanistan, who had been sleeping in the streets of Brussels for nearly three months, told media. On 14 November, local media outlet Bruzz reported of at least 200 people, mostly single men from Afghanistan and the Middle East, queuing  in front of Le Petit Chateau pointing to a “bitter feeling” among them, watching “with sadness how the impossible is done for Ukrainians, while they stand in line for days”. “These last days, we are seeing more and more 15-year-old minors, families with four small children who have no solution”, said a coordinator at the registration centre of Pacheco and added: “I really fear that for the next few days, we will not be able to find a solution for them”. Belgian Red Cross described the situation as “unacceptable, inhuman and degrading” and the organisation has released funds for an emergency intervention. The Pacheco centre has seen “tension” of the crowds waiting their turn making the situation unsafe and consequently the police have had to intervene to close the gates. ECRE member Flemish Refugee Actions expects difficult months ahead for asylum seekers and people hoping to apply for protection as the Belgian authorities seem to be sticking to the “insufficient” winter plan. “When the Ukrainians arrived, due to the war, the registration capacity could be increased in no time. Why can’t that be done now? No, the competent authorities would rather create a situation that is becoming increasingly unsafe, in an atmosphere that is becoming increasingly gruesome”, says Thomas Willekens from Flemish Refugee Actions.

Meanwhile, the situation of young asylum seekers with age doubt is “hopeless”. The Guardianship Service has decided to carry on implementing its decision to stop running a bone test to assess the age of young asylum seekers without shelter. “After a stay on the street, the young people are too weak for such a scan” the service stated. In addition, there is a concern about workers’ exposure to infectious diseases such as scabies. However, Fedasil in turn says that no shelter would be provided without the test as “the implementation of age tests is part of the legal task”. This situation enhances the vulnerability of young asylum seekers as they “have nowhere to go: as long as there is doubt about their age, but a test is not forthcoming, those involved will not have access to shelter”.

ECtHR has granted an interim measure over the case of 148 homeless asylum seekers in Belgium requiring the Belgian authorities to comply with national court orders to provide accommodation – this is the second intervention by the court over the last few weeks. “The case concerns the applicants (adult males), who have applied to the Belgian authorities for international protection and have not been assigned accommodation on account of the alleged saturation of the network for receiving asylum-seekers in Belgium”.

The federal government is responsible for the country’s struggle to provide accommodation to asylum seekers, Flemish Housing Minister Matthias Diependaele said. He also noted that Flanders always “does more than its share” by accepting more than 80% of arrivals while Wallonia lags behind with 21% compared to the promised 30% and added that “The Federal level would provide emergency shelter for the first few days, which gave time to redirect them to the regions. But that system is gone”. In Brussels, the mayor of Schaerbeek has urged the federal government to act quickly and relocate refugees who are “squatting” in a building due to the reception crisis. The number of people staying in the building has risen up to seven hundred, turning it into a “refugee camp” resembling the situation at the notorious Maximilian Park at the height of the 2015 crisis. However, State Secretary, Nicole de Moor (CD&V) said in an interview: “We have done everything we can to provide extra reception places. But the influx weighs disproportionately on our country”. “I find it incomprehensible that there are people who think that I should not do prevention”, especially for those who aren’t entitled to international protection, De Moor added and said: “At that moment you have to dare to say: Don’t come to Belgium”. She explained that prevention is just one of many strategies including increasing forced return. In response to De Moor’s interview, Thomas Willekens from Flemish Refugee Action tweeted: The “influx” must not affect the right to reception. This has been confirmed time and time again by the Court of First Instance, and most recently by the Court of Appeal. Our country is even called to account by the ECtHR. This policy is completely illegal”.