Your Day Your Voice: 68 quotes from people in refuge across Europe 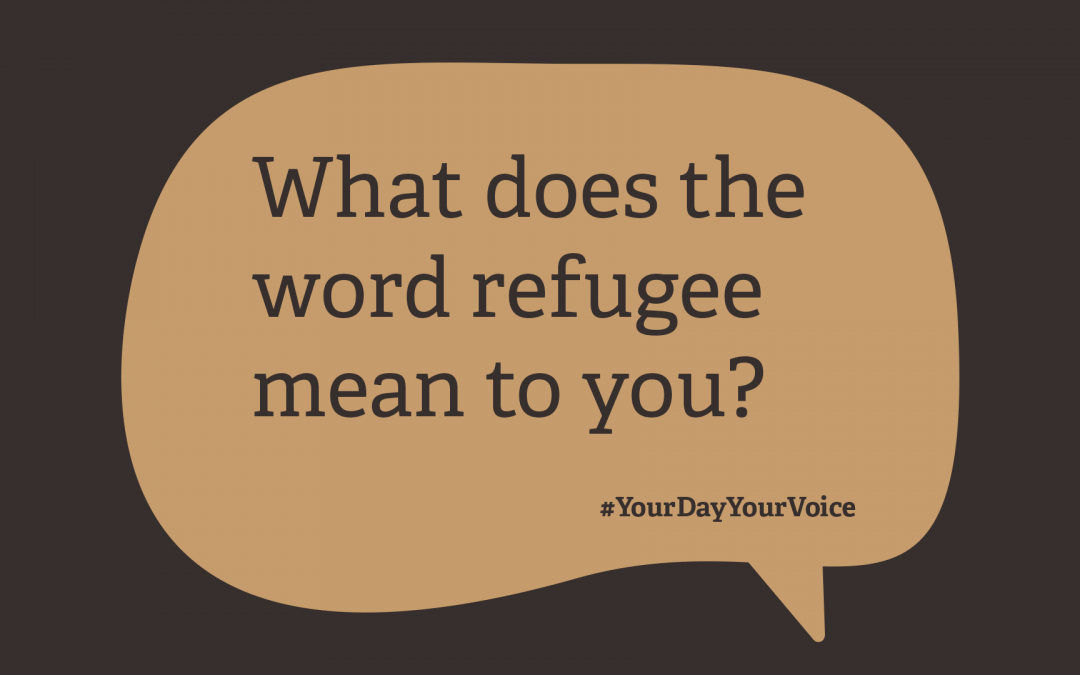 On World Refugee Day June 20, 2018 the Global Trends report from UNHCR reveals that 68.5 million people are forcibly displaced across the globe. 25.4 million are refugees and 85% of them are hosted in developing regions.

For the small percentage that have reached Europe in their search for protection the word refugee, whether used as a legal definition, an identity marker, a statistical category, a cultural label comes with a variety of connotations.  We decided to ask the people carrying it what the word refugee mean to them. We got 68 different responses:

I never thought of the word refugee as a bad word, for me it is just definition of my status in the new country. I never felt shame of it but what makes me feel shame are those people who make me refugee… those who destroy my country and now they say we are bad because we are refugees. We all breathe the same air, refugees or not…We are all humans.”
Abdell baset from Syria

“I never considered myself a refugee. I am a human being who was forced to leave my country and the word make little sense to me since it does not reflect anything else about who I am – a brother, a husband, a graphical designer or a million other things!”
Azzam from Syria

“The word refugee does not mean anything to me…nothing. But, the catastrophe is that it means millions of things to people (people, who believe they are superior and that it is impossible for them to become refugees). Many of us ‘refugees’ believed in that same thing, but once driven out from our countries, we now understand, it was not true! What a pity! it takes a tragedy to realize!”
Tamim from Syria

“When I was in Afghanistan I was always called by my name but in Europe suddenly they changed my name to refugee. I am a human before a refugee. No one would like to have to leave their country – your country is like your mother. Now I am working hard but no matter what I do or achieve I am afraid I will still be simply a ‘refugee.’ In Afghanistan you risk being killed by a bullet – in Europe you are being killed by words.”
Anwar from Afghanistan

“The one that war will pursue wherever he goes.”
Ahmed from Syria

“A new life, new hope and another step towards the next stage of the endless asylum travel.”
Ahmed from Syria

“Adventure is open to all possibilities and we are not envied, it is often a journey towards the right.”
Mohammed from Syria

“A person with a sad and tired face carrying with him a bag full of exhaustion of a long long journey.”
Abdullah from Syria

“A person who’s homeland disappointed him in all aspects so he had to go somewhere else to find himself.”
Somaya from Syria

“A worried human being.”
Faisal from Syria

“A person who seeks safety in unsafe world.”
Khetam from Syria

“The hard feeling which gives you the big push towards high achievements.”
Nisreen from Syria

“A brave person who decides to take his destiny in his own hands despite the dangers out there.”
Hala from Syria

“God help him, a person who ran for his Life, doesn’t even have money to feed himself. This is what the Word refugee mean to me.”
Homsi from Syria

“A person whose soul and everything he loves has been taken from him, a person who has to smile while he cries in the inside. A person who has to carry on and pretend that everything is ok while the situation is totally opposite. Being a refugee is not only leaving a country it is leaving much more than that. You leave your everything and remain empty. You sleep and wake up alone as a stranger.”
Manal from Syria

“A refugee is the result of betraying of the humanity itself.”
Bassam from Syria

“It is like removing the roots of the tree of life from its homeland and throw it in the storm of wind and sunburn.”
Abdulhay from Syria

“Refugee is a person seeking hope.”
Foutun from Syria.

“A rise to the top with unforgettable pain.”
Hassan from Syria

“A refugee is not a crime, it is not an identity or a social status it is when you are forced to leave and find yourself in a place and in a moment you don’t choose.”
Yagoub from Sudan

“Europe means for me was democracy and humanity but know Europe is like a big prison for me and please don’t call us a refugee.” Sirwan, Kurdistan

“Protection and safety in a place where there is no bombing no gunshot noises every morning no militias gates every corner. Being a Refugee to me it means forgetting the past with no present and overthinking the future.”
Ebtehal Abdalla Mansur from Libya

“For me, the word „Refugee“ means a hard beginning, as if you were born again with a lot of difficulties and problems, that will often drive you crazy, and which you have to overcome alone. These problems will continue to pursue you, in the country where you will become a refugee, there will be a lot of people controlling you, and you will always feel of instability. But the bright side here is that, you will not still suffering forever, being a refugee is only a short-term situation, and a temporary period, after that you will have a university, a work, and the most important thing is that, you will have a home away from the plastic collective housing (Containers), only then the bad beginning will become a better ending.”
Amjad from Syria

“Refugee means to me being sad and homeless.”
Syrian woman

“Refugees move homeless from one country to another one.”
Syrian woman

“As a refugee you are foreign, you have no homeland and family anymore.”
Syrian woman

“The word refugee means to have an insecure life and no home.”
Syrian woman

“As a refugee you are far away from your country, family and home.”
Syrian woman in Germany

“Being a refugee means to be on the run all the time without safety. It is a sad word.”
Syrian woman in Germany

“The word refugee means: a person was forced to leave home for a different country to start a new life filled with peace and safety far away from war.”
Syrian woman in Germany

“Refugee means to me: you have lost your land, your precious life, your happy dreams, wishes and plans for the future.”
Syrian woman in Germany

“Refugee means that a person had to leave his country and home. It is a hard word, you cannot really describe it because it is filled with pain.”
Syrian woman in Germany

“We thought we would have to die but we survived in the end. We are alive. Good people are taking care of us now. The healed our broken hearts. The horrible memories and pain are gone.”
Syrian woman in Germany

“Nothing, it is just a word that does not affect me”
Ilham child living in Sweden

“I think that a refugee is a person that is not from this country and that is not welcome. That it is a difference between the people that was born here and those who are not born here”
Fatxi child living in Sweden

“I don´t think it is a good expression, the ones who use it might think that we don’t belong here, that we are going to take the country. It feels humiliating. So it is absolutely not a good word. I think that immigrant is a better word”
Hassan child living in Sweden

“A refugee is someone who has had to flee.”
Child living in Finland

“The word refugee does not mean anything to me, I am a normal human being.”
Child living in Finland

“The word refugee means to me that a person is forced to go to another country and that makes them feel bad.”
Child living in Finland

“Refugee means that you have been forced to move.”
Child living in Finland

“My country is in war. ”
Youth living in Serbia

“I have no longer reason to be in my country.”
Youth living in Serbia

“I lost my family.”
Youth living in Serbia

“´I do not feel safe in my country.”
Youth living in Serbia

“I can not provide a good life for my family.”
Youth living in Serbia

“I don’t have anyone and I need a new beginning.”
Youth living in Serbia

“I have no right to legally work.”
Youth living in Serbia

“I live in a country of other culture and religion.”
Youth living in Serbia

“People see me as I’m not welcome here.”
Youth living in Serbia

“I do not understand the language that people speak in the shop and the bus.”
Youth living in Serbia

“I can not buy spices that I love.”
Youth living in Serbia

“I have no right to go to school.”
Youth living in Serbia

“I have no passport.”
Youth living in Serbia

“I have no freedom.”
Youth living in Serbia

“I can not be with the person I love.”
Youth living in Serbia

“I have no citizenship.”
Youth living in Serbia

“I do not want to fight in war.”
Youth living in Serbia

“I do not want to be married to a woman I do not like.”
Youth living in Serbia

“In my case, I had different views on life, so I left my country.”
Said from Iran, 25 years old

“Refugees need a house, because at the moment we do not have our own home”
Setorah from Afghanistan, 14 years old

“A refugee is a person who strives for a better life”
Salim from Afghanistan, 13 years old

“The refugee wants education and a peaceful place to live.”
Zahra from Afghanistan 15 years old

“A refugee is a traveler who goes from country to country  searching for a better life.”
Sabir, 33 years old

“The refugee leaves home, travels, looking for a better and safer place to live for his family.”
Samer from Syria, 20 years old.

“I was dreaming by Europe for long time ago. I was lie to myself I thought my life will become good. but i come to die slow believe me not for any more. In Africa I live in the war. and here it’s the same. yes I live the same but by different way. ”
Musa from Sudan