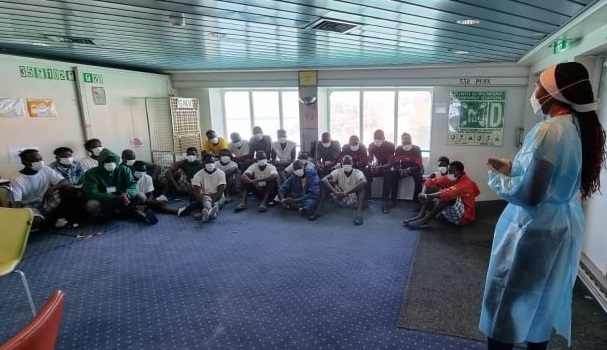 ECRE is an alliance of 103 NGOs across 40 European countries, with a diverse membership ranging from large organisations with global presence to small local coalitions of dedicated activists. Members’ work covers the full circle of displacement, from conflict zones, to dangerous journeys and arrivals in Europe, to long-term inclusion in European societies: their activities include the provision of humanitarian relief, social services, legal assistance, and litigation, as well as monitoring, advocacy and campaigning to change policy and laws.#VoicesOfECRE is an opportunity to share some of their voices.

I started out as a journalist working for the Equinoxe RADIO station know in the public as “the voice of the voiceless”. At that time, my home country Cameroon was going through a wave of change.  I didn’t want to represent state controlled media, but rather to offer an alternative to oppression. Eventually my social activism meant I had to flee Cameroon. When I arrived in Turin in southern Italy I got involved with a small group of social activists forced into exile like myself and we started the organisation Mosaico. In those days we were just a few believers working to organise support to asylum seekers: now we are a formal organisation with membership of ECRE and represented on the ECRE board. We saw a missing link between authorities and people arriving as asylum seekers: based on our own experiences we aimed to offer the support we had lacked when we first arrived.

To be honest, it was an uphill battle in the beginning. Many asylum seekers, particularly those from Sub-Saharan Africa, are for good reasons very mistrustful of authorities. They were suspicious, thinking we might be reporting on them. However, once we established trust our backgrounds became a huge advantage, as we share the experience of the hardship of fleeing and rebuilding your life in a foreign country. Now, I share tears and laughter with the women in our groups and the fact that they come back every week confirms that we are relevant.  They learn about their rights and responsibilities, they receive material support like diapers for the babies, but I also receive calls when they need a lawyer or legal advice during their asylum cases.

Besides working for Mosaico I had to earn a living.  As journalism was not an option at the time, I became a language teacher for multinational companies. When a colleague reached out at the height of the COVID pandemic last year, I joined the Red Cross as a cultural mediator onboard a quarantine ship for asylum seekers arriving by sea.From multinationals to a quarantine ship might not be the most obvious career choice, but I was driven by a strong feeling that I could make more of a difference in that role.

The people I work with carry severe mental trauma and physical wounds from the abuse and torture they suffered in Libya and along the route to Europe.  They include women forced to be sex slaves, some pregnant as a result of rape, as well as men who have been sexually abused and brutalised. Many are extremely aggressive at first. The Red Cross provides expert support from psychologists and medical doctors but of course all cases and people are different and there is no universal treatment. I use my own experiences as a way to create trust – I share their pain and I cry with them – but my aim more than anything is to convince them that they have resources and that they have a future.

It’s not easy to pinpoint a single experience from a long career but an example could be of a woman from my home country of Cameroon who arrived to Italy. She had gone through absolute hell in North Africa and when I first met her she was full of hatred and feelings of vengeance. We spend a lot of time talking and I managed somewhere along the line to convince her that building a future was better than spending all the time contemplating how to revenge the past. She was a trained hairdresser and you know that is a real resource – that can be a starting point of rebuilding your life. Now she has a successful hair salon and we are close friends.  She often expresses her gratitude when we meet. So, you see – why shouldn’t I be happy? Those kind of moments and experiences are valuable and rare.

I was raised by my parents to be content with the little we had and I am not motivated by salary or material things. I look at the suffering of others and think – why should I complain? I mean I have food to eat, clothes to wear and a roof over my head right… But I have always felt a strong moral obligation to make a difference for people in need. That was the motivation when I was a journalist, that is the motivation in Mosaico, and that is what keeps me going with the Red Cross. These survivors are my brothers and sisters and I try to spend more than  eight hours a day making a difference for them – it can be small gestures like a bit of body lotion to give someone – just that small essential luxury, a few diapers for someone’s baby, or a smile and a hug.

I share my background with so many Africans who risk their life on the Mediterranean or Libya and Tunisia trying to escape corruption, abuse, and persecution in their countries –assisted of course by the hypocrisy of Western governments and the indifference of the international community. Africa is blessed with natural resources but no wealth ever reaches the people.

So, my motivation is the dream that things can change.  Without that dream, nothing will ever change!