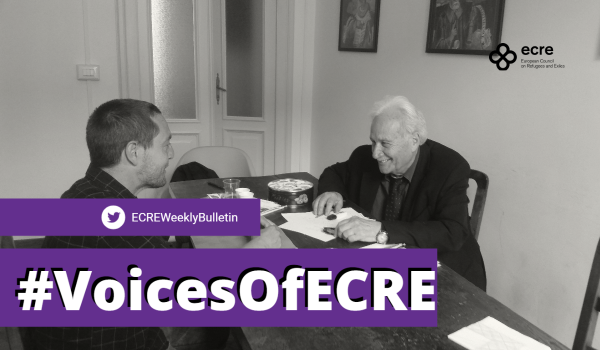 ECRE is an alliance of 105 NGOs across 40 European countries, with a diverse membership ranging from large organisations with global presence to small local coalitions of dedicated activists. Members’ work covers the full circle of displacement, from conflict zones, to dangerous journeys and arrivals in Europe, to long-term inclusion in European societies: their activities include the provision of humanitarian relief, social services, legal assistance, and litigation, as well as monitoring, advocacy and campaigning to change policy and laws. #VoicesOfECRE is an opportunity to share some of their voices.

How did you become involved in protecting the human rights of displaced people and where do you see the main potential of legal intervention in that context?

I started out in criminal law and that was my specialty but the war in Bosnia in the early 90ties and the displacement and tragedy taking place in the middle of Europe had a deep impact – it was a bit of a turning point for me as for many others. We were a group of people with legal backgrounds who felt the need and the obligation to engage and we contacted the UN Refugee Agency (UNHCR). Of course, at the time there was not much of a legal framework in Italy in terms of reception and integration of refugees and asylum seekers – so I guess our contribution was very practical and improvised at that time. First it was a question of arranging travels for people, obtaining the necessary permits for getting them out, and later in the process to ensure them a stay above the 60-days granted in Italy in those days – a sponsorship scheme with private families accepting Bosnian refugees was the solution to at least some of those problems and we were happy to see people we contacted accepting to host.

Perhaps a concrete example could illustrate how legal intervention is not only a question of legal principles but also serves a broader purpose. I was involved in a case of war-crimes representing the survivors of a group of an Italian humanitarian convoy in Bosnia who were kidnapped during the war. An incident that left three of them killed. While the main perpetrator was sentenced to 15-years of imprisonment by a local Bosnian court and served 13 of them, he could have faced a life-sentence in a later second trial in Italy, but the court issued final sentence of 20 years. The thing is – the case was not just about punishment it was fundamentally about acknowledging the crimes and the memory of the victims to document a problematic part of history to hopefully avoid such mistakes in the future. In the same way human rights law is about documenting and acknowledging abuse and violations to change problematic practices and procedures by authorities and inform the policies framing them.

How has ASGI developed as an organisation since it was founded and how has the context it operates in changed?

ASGI was founded in 1990, at a time when as mentioned the legal framework was much less developed and of course the number of arrivals of people in need of protection was much smaller. Founded by just a handful of people the organisation has now grown to more than 500 staff members and volunteers – mostly lawyers but also teachers and social workers – and it is dealing with increasingly complicated challenges and is itself a much more complex entity. While there are many opinions, running discussions and multiple different strategies involved in the three main strands of work across the organisation including strategic case work, advocacy towards law-makers and information and guidance to people arriving as migrants and asylum seekers – the common mission that unite us is the battle against discrimination and injustice against some of the most vulnerable people in our society.

A positive outcome of big principle case at a European or domestic court is of course very prominent and visible but very often it is about working long and hard to make even the smallest difference for someone caught up in the system unable to obtain their legal rights – we see so many individual cases and each and every one of them represent a very real life-situation for someone. There are of course people who find that ASGI is not for them and they tend to leave very fast – in that sense the people staying are usually very dedicated.

While ASGI is by now established as an independent voice and taken seriously also beyond the people and actors sharing our positions – it is no secret that the political context is a challenge at times. With the increase of arrivals and the increased salience of the topic of asylum seekers and migrants the political debate became more polarized. However, in a way external pressure, such as during the period with Salvini as Minister of the Interior, actually make our organisation stronger because the injustice and consequences of the failed policies are so evident and demands a focused strategic response. As an example ASGI won a series of cases over discrimination in far-right held municipalities across Italy and we sometimes joke that we should thank them for being so obvious in their violations. The Supreme Court, has I believe been overwhelmed over the caseload we presented at times but some important principle decisions have been made in relation to the erosion of fundamental rights for asylum seekers and refugees in Italy – for example on the removal of humanitarian protection under the so-called Salvini Decree, as well as the limitation of the right to appeal negative asylum decisions, and the right to remain for people after years in Italy.

How do you see the balance or interplay between legal interventions and advocacy in ASGI’s work?

We won access to detention centres in the hotspots through legal intervention and could witness and document how deeply problematic conditions were and how things were out of control in an environment almost constituting a legal vacuum for detainees. However, initially authorities deflected or rejected responsibility and took little action. Sadly, it took a tragedy and some very direct public advocacy to provide at least some change. When a detainee committed suicide in Turin it generated a much needed debate and more than 40 ASGI lawyers conducted a public protest in front of prefecture – standing in silence wearing our robes symbolising the rule of law. After that we started seeing the release of some of the most vulnerable people. We made them aware that they were under the scrutiny of our eyes in a very public manner. In that sense both legal action and advocacy is needed and as in this example sometimes in combination.

We work in a context where it is often not a black and white question of legality or not – there is a political context and agenda that we have to be aware of – like we see at the European level through externalisation deals, the negotiations over the European Pact on Migration and Asylum and the TPD being triggered over the tragedy in Ukraine but with the continued lack of legal pathways for most other groups like Afghans for whom evacuation schemes and humanitarian corridors were established only for a selective few and with rather unclear criteria. Political perceptions vary and accordingly so does the legal context. The situation is similar to the tragedy of asylum seekers detained in Libya or rejected as they try to cross the Mediterranean Sea.

A very disturbing local example of politics being omnipresent in a legal context would be the criminal case against Domenico Lucano mayor of the small town of Riace in southern Italy. The mayor, who had won international recognition for transforming his town – that was losing its population – by welcoming and integrating people of refugee and migrant background was sentenced to 13 years of imprisonment in 2021 over alleged embezzlement, abuse of office, abetting illegal migration and breach of public procurement laws. As a lawyer on the case I can tell you it was an unusual process and an absolutely disproportionate and highly political ruling. I mean here we have someone who is seeing people arriving as migrants as a potential and manage to create a safe haven for them and at the same time revive his town turning it into a vibrant and successful example of positive co-existence beneficial to all and then he becomes a political target – simply because he is a powerful symbol.

To what extent are authorities including police an active partner in ensuring the rights of asylum seekers and refugees?

The situation varies significantly across different municipalities and authorities but speaking in general terms there are a lot of practical obstacles for asylum seekers and refugees in obtaining their rights even if they are ensured by law. While, for instance it is in principle possible to request a new form of protection (“protezione speciale”) directly from the police – in practise it remains extremely challenging – asylum seekers face a huge bureaucracy and somewhat arbitrary demands when dealing with authorities. They might be asked to send any number of documents on short deadlines including things like a hospitality declaration or other documentation they would be able to obtain, they would typically have challenges in reaching the correct information and many times also to access the correct authorities and the result is months or even years of lack of reception and thereby destitution or survival in the fringes of society. They would not outright refuse as that would of course be unlawful but it’s like a black hole of red tape. If a lawyer intervenes they might in fact accept to assist in a given case but they are reluctant to do anything implying general responsibility.

On a structural level there are policies and procedures with a very clear impact in terms of exclusion and discrimination. One example would be the demand for repayment of received support for people who seek to support themselves and reach the official and very modest threshold for allowed income, with the required element of ten years of residency we have seen a case of a single mother ordered to repay more than 10.000 Euro as she didn’t meet this requirement – just over a bureaucratic problem – she would have zero chance of ever accumulating that amount of course. ASGI is working to map out these kinds of issues but it is a serious challenge because what we are facing is a somewhat arbitrary and thereby complex situation of exclusion and discrimination.

What is your personal motivation in this sometimes uphill battle to ensure the legal rights of asylum seekers and refugees?

I am not saying it’s easy to be a human rights lawyer but when you see what people in need of protection are facing it does not compare – we might not always succeed but we are obligated to try to the maximum of our ability and resources – it is as simple as that. In some ways their pain is what generates our efforts. The International human rights system constitute a main achievement and tool in terms of universal justice and it is still our best chance to make it a reality.