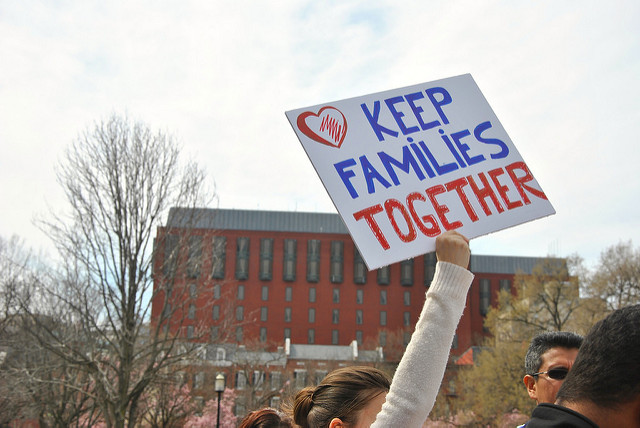 President Trump’s administration faced condemnation this week over the policy of forced separation of migrant children from their parents, who faced detention after crossing the US-Mexico border. Many of the families concerned had travelled from Honduras and El Salvador with the hope of seeking asylum in the USA.

Since May, nearly 2,000 children have been separated from their parents under the policy, and held in harsh conditions. Reports describe children as young as two being torn from their parents and held in fenced metal cages with scant supervision. The separations come as a result of the Trump administration’s commitment to ‘zero-tolerance’ immigration enforcement at the USA’s Southern border. On 7 May 2018, Attorney General Jeff Sessions announced a new blanket policy to ensure the criminal prosecution of all people who seek to cross the border illegally between ports of entry. Legal resources at the border were bolstered, with the US government sending 35 federal prosecutors and 18 immigration judges to the southwest region to assist with an expected increase in border crossing cases.

The policy aimed to achieve a 100% prosecution rate for all who entered the USA illegally. The crackdown ensured that parents would be separated from their children after being apprehended, because minors cannot be kept in federal criminal detention facilities. Sessions stated at the time, “If you are smuggling a child then we will prosecute you, and that child will be separated from you as required by law…If you don’t like that, then don’t smuggle children over our border.”

Media coverage of the situation at the borders in recent weeks, including audio recordings released by ProPublica of separated children at a protection facility crying for their parents, sparked a public outcry, with the Trump administration facing accusations of deliberate and inhumane cruelty. After struggling to defend the policy, the President signed an executive order on Wednesday with the intent to “maintain family unity, including by detaining alien families together where appropriate and consistent with law and available resources”. The zero-tolerance stance remains unchanged by the order, which states: “it is the policy of this Administration to rigorously enforce our immigration laws. “

It remains to be seen whether the order will face a swift legal challenge over an existing ruling that says children may not be held in detention for more than 20 days. Officials in the Department for Homeland Security have also suggested that a lack of capacity will make it impossible to hold families together.

Kate Voigt, an associate director of government relations at the American Immigration Lawyers Association, described the executive order as “not any sort of solution”. Voigt observed that “the zero tolerance policy remains in effect and that is the root of the family separation crisis created by the Trump administration.”