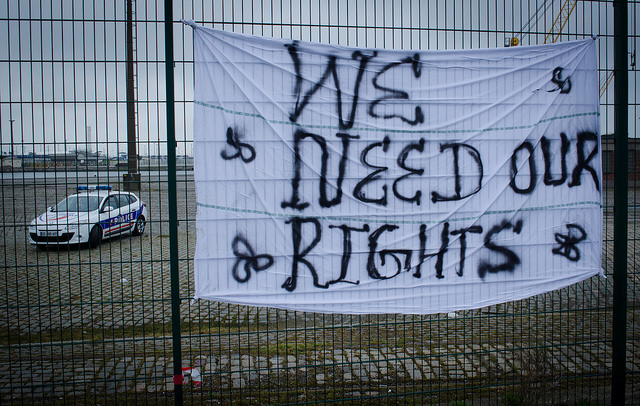 UN human rights experts are urging the French government to provide safe drinking water, sanitation services and emergency shelter for migrants and asylum seekers in Calais, Grand-Synthe and other areas along the Northern coast of France.

Migrants and asylum seekers are living without adequate emergency shelter or access to drinking water, toilets or washing facilities. According to the experts, temporary measures put in place last year, such as contracting a local organisation to provide drinking water and shower facilities, were not sufficient. “Some efforts have been made, but not enough. I am concerned that for every step forward, two steps are taken back. The situation along the northern French coast is emblematic of the need for much more attention from national and international authorities on this issue,” said Léo Heller, the Special Rapporteur on the human rights to water and sanitation. The experts stress that without valid housing alternatives in the Calais area, dismantling the camps was not a long-term solution. “We are concerned about increasingly regressive migration policies and the inhumane and substandard conditions suffered by migrants,” said Felipe González Morales the Special Rapporteur on the human rights of migrants.

The experts also called for an end to harassment and intimidation of volunteers and NGOs providing humanitarian aid. They urged France to fulfil its obligations and promote the work of human rights defenders. Annie Gavrilescu, field manager in France for the charity Help Refugees, said “A new worrying pattern is emerging, in Calais and across Europe, of criminalising aid workers. This comes in the context of significant aggression, violence and neglect that refugees themselves face from the police.” France has arrested a number of people for helping refugees under what has become known as the “Crime of Solidarity”, Article L622–1 of French immigration law.

There are an estimated 900 migrants and asylum-seekers in Calais and 350 in Grand-Synthe, as well as an unknown amount in other sites along the coast, such as Tatinghem and Dieppe. In March the French government took over food distribution to migrants in Calais, which previously had been provided by NGOs such as L’Auberge des Migrants, Utopia 56, Refugee Community Kitchen and Salam. The NGOs initially stopped their distribution in order to allow the government facilitated distribution to succeed, but resumed providing some food a few days later due to a minimal uptake of the government provided meals. NGOs cited a lack of trust in the authorities as a reason for the low numbers. Representatives from L’Auberge des Migrants stated that last week police dismantled a camp whilst the people living there were getting food. One Eritrean boy said, “The government gives us food with one hand, and takes our tents with the other.”