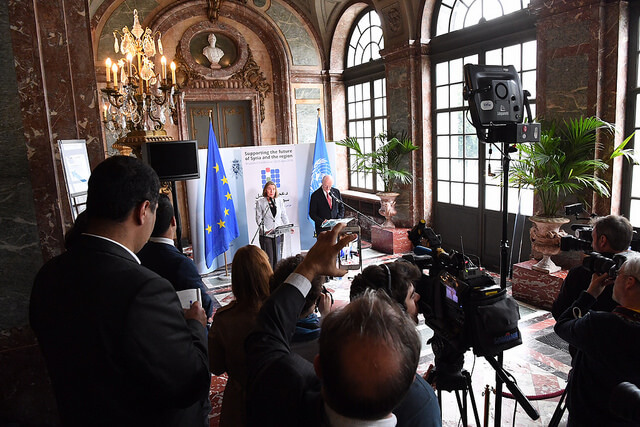 This week the EU and UN co-chaired the third Brussels Conference on Supporting the future of Syria and the region. It convened representatives from 57 countries and more than 20 international organisations and UN agencies. Ahead of the Conference, two days of dialogue with civil society representatives and decision-makers took place.

Federica Mogherini, the High Representative of the Union for Foreign Affairs and Security Policy, stressed that the purpose of the conference was to support the UN-led political process and to mobilise international financial support for Syrians inside and outside the country.

In light of the immense humanitarian needs, with over 11 million Syrians in need of humanitarian assistance and more than 5.6 million Syrian refugees displaced outside the country, the conference mobilised aid to Syrians inside the country and in neighbouring countries, including for hosting communities. The pledges totaled € 6.2 billion for 2019, and multi-year pledges of close to € 2.1 billion for 2020 and beyond.

Among the issues discussed during the days of dialogue and the Ministerial meeting were returns to Syria and support to reconstruction. Various civil society organisations, including Syrian organisations, made the case that due to the ongoing conflict, the risk civilians face, which includes forced conscription or detention, unexploded services, the lack of basic services and the inability to monitor what happens to people once they return, there should be no organized or assisted returns to Syria. The joint EU and UN declaration echoed this, by stating that “conditions inside Syria do not lend themselves to the promotion or facilitation of organised voluntary returns in conditions of safety and dignity in line with international law.” The Independent International Commission of Inquiry on Syria warned that it is neither safe nor sustainable for refugees and internally displaced people to return to their homes in Syria.

Regarding reconstruction, the EU reiterated that support for this will only be possible if a credible political solution is underway in Syria. It also stressed that “a successful reconstruction process also requires minimal conditions for stability and inclusiveness, a democratic and inclusive government guaranteeing people’s safety and security, an agreed conflict-sensitive development strategy, reliable and legitimate interlocutors as well as guarantees in terms of funding accountability. None of these conditions are yet fulfilled in Syria.”

No commitments on resettlement and other safe and regular pathways for refugees were made at the conference. Resettlement submissions from Turkey, Lebanon, Jordan, Iraq and Egypt decreased considerably since 2016 due to limited resettlement places.