The Future of the Asylum, Migration and Integration Fund: Our Call for More Humane, Transparent and Effective Resources for Asylum and Migration in the Union 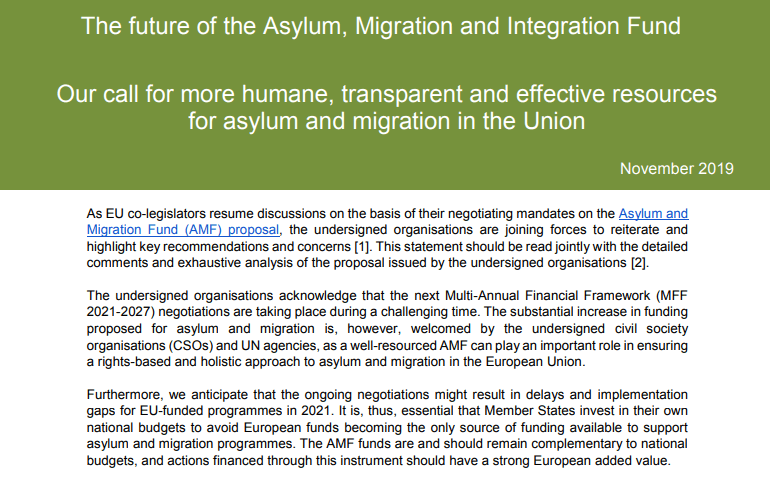 Last October, the EU institutions have resumed discussions on the new Asylum and Migration Fund (AMF) proposal, part of the wider negotiations on the next Multi-Annual Financial Framework (MFF 2021-2027) of the EU. Together with a number of other NGOs, UNHCR and IOM, ECRE has issued a statement calling for a better use of EU resources in asylum and migration policies.

Despite a substantial increase in funding proposed by the European Commission, the future of the Asylum, Migration and Integration Fund remains unclear, given that member states have only reached a partial agreement on the regulation, which does not address specific budgeting to the different priorities of the fund.

Furthermore, delays and implementation gaps for EU-funded programmes in 2021 are very likely. In fact, a considerable amount of AMIF is managed between the Commission and EU member states and requires the general agreement to be translated into national programmes, which risks to provoke serious delays in the allocation of the funds. This would undermine the provision of services especially in those member states which highly rely on AMIF for financing their asylum and migration policies, unless adequate investments are not deployed from national budgets.

To mitigate these risks and ensure that member states’ national programmes will deploy more effective resources for more humane asylum and migration policies in Europe, ECRE and the co-signatories have asked the co-legislators to:

(I) Address, within the use of the fund, the groups which are most vulnerable to violence, exploitation and abuse such as human trafficking victims, regardless of their residence status; Fund, through AMIF, the establishment of case-management based alternatives to detention as well as psychosocial and mental health support for migrants and refugees;

(II) Avoid the use of AMIF to build new detention centres and to detain children or their families;

(III) Limit the amount of AMIF funding spent outside the EU and ensure that this complies with human rights standards and is inherently linked to the internal dimension of asylum and migration policies;

(IV) Include an effective partnership principle in the AMIF regulation, which grants meaningful and inclusive participation of NGOs and migrant-led organisations in the preparation, implementation, monitoring and evaluation of EU-funded actions on asylum, migration and integration;

(V) Establish a coordination mechanism ensuring the complementarity between AMIF and the other EU funds active in integration policies such as the European Social Fund  Plus (ESF+), as well as a 30% minimum allocation requirement for the development of integration activities.

In the light of the vote in the European parliament on the AMIF resolution, the above mentioned organisation had prepared another joint statement in February 2019.