Interview with SEEBRÜCKE: The crisis is national politics – the solution is local engagement 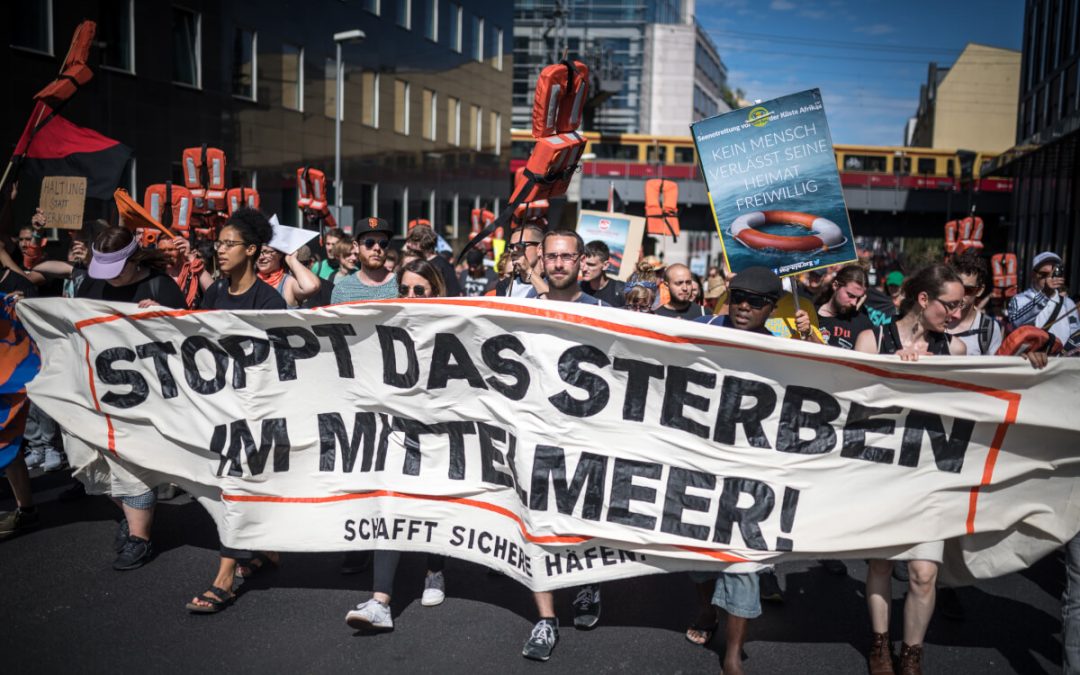 An Interview with Liza Pflaum, a representative of the civil society organisation SEEBRÜCKE, which demands ‘safe harbours’ all over Europe.

What is SEEBRÜCKE and how did it come about? What are your key objectives?

SEEBRÜCKE, which means literally “sea bridge”, was founded in Berlin in the summer of 2018, when several boats, which had rescued refugees in the Mediterranean were forbidden to enter any safe harbour. It started as a messenger group that brought together activists from the political and cultural scene of Berlin. We decided that there has to be an answer from civil society, when states break international laws by actively preventing civil see rescue NGO’s from saving lives. Within two days we then set up the website (www.SEEBRÜCKE.org/en) to reach out to people all over Germany and Europe and announced the first SEEBRÜCKE demonstration in Berlin. Our overarching aim is to fight for safe passages, so that people can actually arrive here – in Germany – safely, without risking a really dangerous journey, for example over the Mediterranean Sea.

We stand in solidarity with all people coming to Europe, everyone should have the right to move freely. We are fighting for free movement for everyone and safe passages for everyone. There are good reasons why people decide to leave their country. We stand against the separation between the ‘bad migrant’ and the ‘good refugee’. Migration is not a new phenomenon. It has always been part of society and we might need to organise our society differently to make sure it stays like that. In my opinion, a world organized in national states, collides with migration. Rather than sticking to this concept and isolating Europa more and more, we should think about new concepts and politics to organize our societies.

How are you pursuing these aims? What are your main strategies?

We are active on two levels: First of all, we organize protests to strengthen the voice of the progressive and open civil society and to show the solidarity which is excised in civil society. In the last months we showed, that there are a lot of people who stand in solidarity with refugees and against the politics of isolation implemented at EU and national level. We already have over 90 local SEEBRÜCKE groups, in Germany but also in Vienna, Brussels and other European cities. Our biggest European-wide event was a ‘European action day’ in September with over 20 cities all over Europe – for example in Portugal, Poland, Spain, France – participating in protests. Also, we are involved in European wide protest before the European elections in May.

On the other hand, we address our demands directly to cities and municipalities and engage them in migration politics and ask them to take a stance against the anti-migration agenda personified by interior minister Horst Seehofer.

Throughout last year and in the beginning of this year we have witnessed several so-called “Disembarkation crisis” – search and rescue vessels stuck at open sea for days or weeks. What can the role of civil society be in offering concrete and sustainable solutions in these situations?

I think, civil society can have a central role pushing for solutions, which have not been thinkable so far. To respond to these situations, push for new perspectives and innovative policies. For example, involving cities and municipalities more actively in immigration politics because they are handling the practical and concrete tasks – they are the ones receiving people and assisting them in rebuilding their life’s.

Over the past seven months, our local groups have organised over 1000 ‘Actions’ and tried to put pressure mainly at the local level – cities and municipalities – to demand “safe harbours”. That means, we not only urge port cities in the Mediterranean region to take in those rescued. We urge German cities to open up for refugees and thus become “safe harbours”.

We saw that the closure of the ports in Malta and Italy is directly related to the fact that countries like Germany are not willing to take in more refugees and thereby are effectively contributing to the deaths on the Med.

How many cities have declared themselves ‘safe harbours’ and what does it imply? How do you think the willingness of civil society to accept those rescued at sea can inform government’s policy towards disembarkation, which tends to be more restrictive?

Until today, there are 45 cities in Germany that have declared themselves ‘safe harbours’ (https://seebruecke.org/startseite/sichere-haefen-in-deutschland/). This means, they publicly declare their solidarity with refugees and are willing to accept more refugees than they have to according to the federal distribution key – the ‘Königsteiner Schlüssel’. That’s primarily a symbolic action. But now we actively try to find legal ways in which refugees rescued at sea can come directly to cities.

This is new territory for everyone; we are trying to come together with all ‘safe harbour’ cities this summer for a congress to try to tackle fundamental challenges such as how cities can take in more refugees if they do do not have the right to arrive directly? However, Berlin, for example, is also a federal state of Germany – a Bundesland. As such, it could initiate a refugee reception scheme on state level, which might make it possible for Berlin to directly accept refugees. Now the question is whether the ministry for the interior has to approve it or not. This is a legal grey zone and legal researchers are currently exploring this option, as well as the question how municipalities can be more involved in migration politics generally.

Why do you think is there such a blatant disconnect between policies pursued at the national/European level, which are designed to deter people from seeking protection in Europe, and the declared willingness to receive more people in civil society and at municipal level?

I’m always asking myself this question. We’ve already seen in 2015, how German civil society showed huge solidarity with the refugees arriving. In the recent years, populist right-wing voices became much louder and the politicians at national level sadly listened to that segment instead of the broader population. I think we experience in SEEBRÜCKE that many people who helped in 2015 today share their lives with people who arrived in 2015. They realize that, if the same people tried to cross the Mediterranean now they would be likely to die. So at the local level people have built relationships from living together and at the national level politicians are really disconnected from the people they are targeting with their policies.

We experience much more solidarity at the municipal level, also because there is a much tighter connection to the people living in the cities and communes.  It is a really interesting perspective to think about how historically the idea of ‘citizenship’ came to live, from the cities themselves. Today, in movements like SEEBRÜCKE, people are organizing themselves from the bottom-up in stark contrast to the national level, which is trying to organise society from top-down.

A draft bill of German interior minister Horst Seefhofer, currently discussed in the ministries, plans to punish organisations that publish information on deportation dates with up to three years of imprisonment. It also criminalises counselling services that provide information on how to prevent deportations. How would such a bill affect SEEBRÜCKE and its activists?

It will affect us a lot. But even more it will affect refugees. In addition to the complete deprivation of fundamental rights of refugees, it attacks movements like SEEBRÜCKE, or others organised in the anti-racist scene which stand in solidarity with refugees. We can see the same tendency already in the criminalisation of search and rescue actors and the case of ten Iuventa crew members who have been charged in Italy and could face up to 20 years in prison. Preventing deportations is not the main focus of SEEBRÜCKE but many of our local groups are also involved in anti-deportation protests. We are organising a big demonstration on the 30. of March in Berlin, to stand against this bill that criminalises solidarity. We will do everything to prevent Seehofer from going through with this because it would be one of the worst things that could happen to us and the people arriving to our country as asylum seekers.