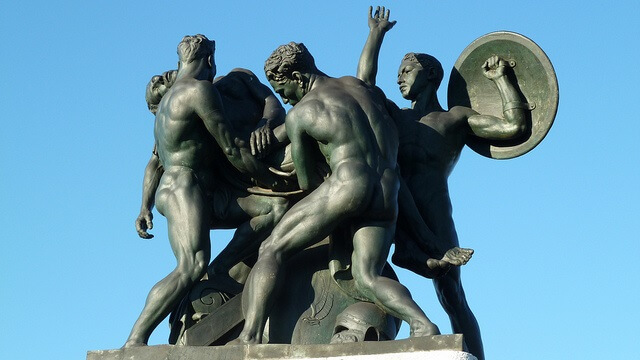 The spat between Luxembourg’s Foreign Minister Jean Asselborn and Italy’s Deputy PM Matteo Salvini was secretly filmed and circulated online by Salvini allies who declared their man the victor. Watching the clip, there is however much to satisfy those of us on the other side of this conflict. Of course, politics shouldn’t be conducted in this way, but it was somehow refreshing to see a mainstream politician (and who could be more mainstream than Luxembourg’s senior diplomat?) losing their temper with the idiocies of the far right, to the point of swearing and tearing off his headphones to cut the interpretation. We were all Jean in that moment.

Asselborn made some good points too, drawing a parallel between migrants arriving in Europe now and Italians in Luxembourg, reinforced later by the discussion of Italian immigration and the prejudice people faced, stimulated by a letter and articles from a group of descendants of Italian migrants to Belgium, who urged that current migration policy be based on lessons from its past.

Salvini’s response to Asselborn was also telling, exposing an under-discussed issue: gender. His answer to Europe’s (Italy’s) demographic crisis: women should have more children. Leaving aside the total implausibility of increasing Italy’s birth rate – one of the lowest in the world for more than 20 years – this approach takes us to a split in the far right political family, and one that militates against them forming enduring alliances.

In one corner are the patriarchal far right, including Lega, Fidesz, Law and Justice and quite a section of the Austrian FPÖ. Their politics are often an expression of toxic masculinity, complete with macho posturing. At the heart of their positioning on the asylum and migration issue is not just the presentation of migrant men as a threat but the presentation of themselves as the defenders of Europe, who will beat back these invaders. Migrant women might need protection (although this is not a given – they are often invisible) but European women are certainly fragile flowers who need the protection of these heroes. But protection and rights should not be confused.

This patriarchal far right is engaged in an attack on women’s rights, as the Sargentini Report on Hungary details in a full chapter. Women’s rights defenders across Central Europe are threatened and even analysts are not tolerated, as the closure of university gender studies departments, reported by the Progressive Post, shows.

Hungary’s is a government with no women, as has been the case for years. Italy’s has very few, and the changing stance of 5 Star (which for now defies characterisation) will likely remove more women from Italian politics (for example, in its contingent of MEPs after the 2019 elections).

For this patriarchal far right, election results show that their electorates skew male, like that of their American equivalent. And like Trump, they both embody and exploit the frustrated entitlement of certain white men who harbour deep grievances about no longer being privileged in society (although of course they are).

In the worst cases, their grievances are manifested in violence, and it is impossible to have a sensible discussion about preventing violent extremism, be that inspired by far right or religious ideologies, without a gender perspective. Terrorist acts are almost always carried out by aggrieved, frustrated young men, vulnerable to manipulation, many with a record of violence against women, again expressing their masculinity in a “toxic”, destructive way. Prevention can only work if this is understood.

In the other far right corner, in stark contrast, is what could be called the pseudo-liberal (but Islamophobic) far right. Here we find far right parties from France, Germany, the Netherlands, the Nordic region, Belgium and the UK. In recent history, these parties are more likely to have female leaders than the mainstream left and right. Their anti-migration and sometime anti-refugee stance draws on the idea that liberal values, including the equality of men and women, are at threat from migrants. Islam is often explicitly or implicitly the source of the threat for these parties, migration “brings in” Islam.

There is a simple denial of the fundamental gender inequalities that persist even in the most “progressive” of European countries. The contradictory thinking comes to a head in the emblematic argument that the Burkha should be banned in order to defend women’s rights. Even if we skirt around the problems arising from male-dominated legal and political institutions legislating on what women should wear, we soon arrive at the issue of whether the burkha is really the most important threat to women. Good that they are interested in women’s rights but perhaps better to start with the lack of representation in parliament, the virtual impunity for rape, the persistent gender bias in recruitment leading to perpetual “jobs for the boys” scenarios, or the attack on defenders of the human rights of women in “illiberal” European countries. The real target is betrayed by the fact that their discourse is often full of stereotypes about lack of integration of Muslims that seem just bizarre to those who live in majority-Muslim neighbourhoods, where co-existence and “integration” are just mundane facts of life.

Of course, links between gender and migration should not be a taboo subject. For example, there are differences in views on gender between some refugee populations and the populations of the European countries where they are now. Research by the German employment agency to support labour market integration of recently arrived refugees from Syria found only one serious divergence in values between the refugee population and the German-born sample: views on gender roles. This makes it an important issue to be addressed in inclusion policies. But that cannot be done by falling back on Islamophobic tropes or on denying the patriarchal nature of much of European politics.

Asylum systems are also deeply gendered sites, but often to the detriment of men. The tendency at national level across Europe is to restrict rights for all asylum seekers except the vulnerable. For example, in some asylum systems de facto detention applies for all except the vulnerable; women are often and for some categories of women, automatically classified as “vulnerable”. This can lead to differences in the regime and procedures to which people are subject. Men’s vulnerabilities and previous experience are often treated differently from women’s. They are less likely to be identified as such when they are victims of trafficking and the sexual violence they suffer and the risks they face may be completely over-looked, including the suffering that results from Europe’s policies (for example, pioneering work by activists based in Tunisia is exposing the sexual violence suffered by migrant men in Libya, ignored for multiple gendered reasons.)

Beyond the far right, there are multiple other often troubling gender dimensions to policies and practice on asylum and migration. There are lots of women working on asylum and migration, in the academic sector, governments, think-tanks, NGOs and so on. So why do so many major events, including those organised by and funded by the EU, feature panels of men? (And why are so many of them talking about “floods” and “invasions”, birth rates in Africa as the greatest “threat” Europe has ever known? The need for prevention of flows, defence of borders etc, etc). There is also the phenomenon of the migration saviour, always a man not lacking in confidence, who steps in usually after working on another issue (environment, development, governance, private enterprise etc) to provide the “solution” to Europe’s “migration problem”. Usually managing to perpetuate the very “crisis” framing that precludes solutions, throwing in some over-simplification and caricaturing those working on the issue in archetypical “straw man” arguments.

It is also hard not be aware of gender when many of the tense debates between civil society working on migration and policy-makers have seen an all-female line of civil society representatives facing policy-makers who are nearly all male. It’s hard not to call patriarchy when witnessing so many scenes of angry red-faced men with power, for example European Commissioners, shouting down female civil society activists as unrealistic or naïve for pointing out that Europe needs migration or that the EU-Turkey Deal will lead to human rights violations (and using responses that would be deemed “emotional” or “hysterical” if they came from women, e.g. “So you want people to die in the sea?” “The population explosion in Africa will create an influx like nothing we’ve ever seen before”.)

There are often quite straightforward explanations rather than grand conspiracies: policy-making and debate on migration has come to be dominated by interior ministries, and interior ministries across Europe tend to be led and staffed by men – often almost exclusively. And NGOs are also not faultless because they tend to be dominated by women (except at senior management level). At least they generally try to become more diverse although there is a long way to go (especially on the crucial, related, question of inclusion of people with a refugee background).

There are no snappy solutions here. Just reflection on unintentional and deliberate gender bias and on the creation, reinforcement and manipulation of gender stereotyping. Intersectionality is important, particularly the interplay of gender and migration status, for example. Within and beyond the far right the persistence and revival of patriarchal structures and thinking in Europe all need to be part of the contemporary asylum and migration debate. And not through stereotypes and clichés about the uncivilised “other”.