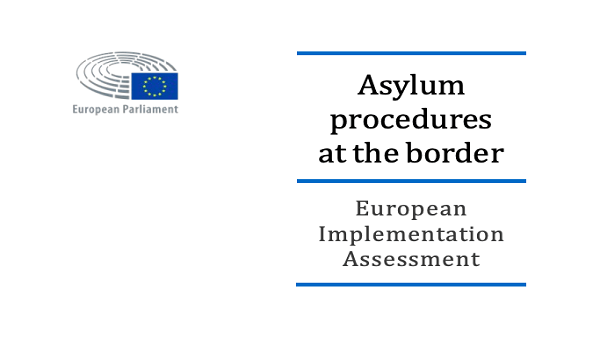 Last week, ECRE’s contribution to the implementation of asylum procedures at the border, has been published by the European Parliament Research Service (EPRS) which commissioned it. The entire European Implementation Assessment paper on border procedures contains three parts. Besides the in-house research conducted by the EPRS itself, there is also part on the legal assessment of Article 43 on border procedures carried out by Dr Galina Cornelisse and Dr Marcelle Reneman of the Free University of Amsterdam, and the comparative analysis on the application in practice of Article 43 of the Asylum procedure directive that was carried out by ECRE (p.145 and further).

The study carried out by ECRE covers seven countries: France, Germany, Greece, Hungary, Italy, Spain and Portugal. The study relies on desk research and a variety of sources including qualitative and quantitative information on national practices extracted from the Asylum Information Database (AIDA) managed by ECRE. National experts from the analysed countries further provided thorough and valuable feedback.

Member States’ practice differs significantly when it comes to both the design and use of the border procedure, as allowed by the discretionary nature of Article 43 recast APD. However, similarities occur: whether applied at land, sea or air borders, border procedures involve a variety of authorities and they are invariably characterised by short deadlines for decision-making and for lodging appeals, a lack of information to (potential) applicants, and reduced accessibility for interpreters, NGOs and legal aid providers. This due to the locations where procedures are conducted and where applicants are (officially or de facto) detained. The evidence suggests a more restrictive approach to protection claims in border procedures compared to similar caseloads examined in regular procedures, and further suggests that significant protection gaps result from the unavailability or inadequacy of procedural guarantees.

The main fundamental rights negatively affected by the current implementation of the border procedures are the prohibition of torture and inhuman or degrading treatment or punishment (Article 4 EU Charter of Fundamental Rights (CFR), Article 3 ECHR). As well as the right to liberty and security (Article 6 CFR, Article 5 ECHR), the right to asylum (Article 18 CFR), protection in the event of removal, expulsion or extradition (Article 19 CFR), the rights of the child (Article 24 CFR) and the right to an effective remedy (Article 47 CFR, Article 13 ECHR).

The right to be heard as well as the procedural guarantees foreseen in the recast APD, such as the right to information, legal assistance and interpretation, are either not applied or only applied to a limited extent in border procedures. This undermines the right to asylum as well as the principle of non-refoulement, as enshrined in Article 18 and 19 of CFR.

Effective vulnerability identification mechanisms are lacking in all countries examined, thereby rendering any special procedural safeguards and adequate support laid down in EU law meaningless in practice. The impact on unaccompanied children is of particular concern and raises questions as to compliance with the best interest of the child principle, enshrined in Article 24(2) CFR.

The short time limits to lodge and decide on appeals, the lack of suspensive effect of appeals in certain countries, and the difficulty in accessing quality legal aid raise concerns as to whether the right to an effective remedy as foreseen in Article 47 CFR is ensured.

The research also shows that detention, mostly in inadequate facilities, is the norm under border procedures either because it is mandated by law, or as a result of a situation of de facto detention. In many Member States a legal basis for practices that in actual fact amount to detention is lacking (de facto detention). In other Member States, for example those that apply the hotspot approach, the blurring of restrictions on freedom of movement and detention is an issue of concern. The systematic and prolonged use of (formal or de facto) detention, which should be an exceptional measure used as last resort where alternatives to detention cannot be applied effectively, is not in line with the right to liberty enshrined in Article 6 CFR.

ECRE further presented a wide range of recommendations (p. 210 and further), to enhance human rights compliance when using border procedures. Even though these recommendations were formulated in the context of the implementation of the current border procedure, they should be taken into account by the co-legislators when negotiating the Commission proposal on border procedures. As already highlighted in ECRE’s previous Policy Note on border procedures, rendering border procedures (near) mandatory or through otherwise increasing their scope, will not necessarily increase effectiveness and may only have a limited impact on harmonisation. Further harmonisation should instead aim at establishing the highest standards of protection across the EU and raising protection standards where they are currently insufficient, as well as ensuring adequate investment in, and thus improving effectiveness and efficiency of, the regular procedure.