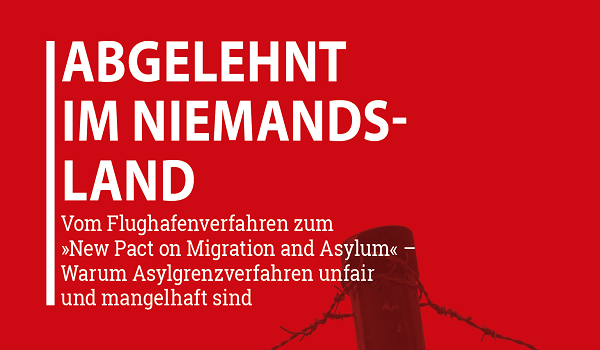 Through a new study that analyses German airport procedures and compares them with the border procedures proposed in the European Commission’s New Pact on Migration and Asylum, PRO ASYL substantiates its criticism of the proposals.

In a new study published on 22 June, ECRE member PRO ASYL assesses German airport procedures in light of the current practice at Frankfurt Airport. The publication provides an overview of the legal framework of German airport procedures and outlines procedural standards set out in a landmark judgement of the German Federal Constitutional Court in 1996. It proceeds with two assessments by experts from the field providing insights into how airport procedures play out in practice at Frankfurt Airport. With only a few hundred cases per year, airport procedures account for less than 0.5% of all asylum procedures in Germany. However, as illustrated by the two assessments, they come with severe deficiencies – even in the context of comparatively favourable conditions at an airport compared to other external borders of EU Member States, given the lower number of applicants for international protection and a better access to legal assistance due to the proximity to bigger cities. Among other shortcomings, the study underlines that a comparatively higher share of cases are rejected as “manifestly unfounded”, that the assessment of the reasons for flight from the country of origin are superficial and inadequate, that vulnerabilities are not adequately considered, and that airport procedures often come with lengthy periods of deprivation of liberty, especially when returns of rejected asylum seekers are delayed. The study continues with an assessment of the potential impact of the European Commission’s proposal for border procedures under the New Pact on Migration and Asylum on the German airport procedure. Screening at the border, the fiction of non-entry, and lengthy detention due to delays in returning rejected asylum seekers are among the problematic aspects of the German airport procedure that re-emerge in the Pact. One worrying change that would be introduced by the Commission’s proposal relates to the maximum duration of border procedures, which could be extended up to twelve weeks under the new Pact, compared to a maximum of nineteen days in the current national legal framework. This risks to increase the length of de facto detention of asylum seekers in airport facilities. Furthermore, a higher number of applicants for international protection would be subject to a border procedure as it would apply for anyone coming from a country with a low recognition rate. The study concludes that if people seeking protection are not allowed entry into the territory, but are instead de facto detained at borders, it will result in unfair and inadequate assessments.

“Contrary to the widespread assumption, the German airport procedure is not a prime example of fair border procedures. Instead, the study shows how problematic such accelerated procedures that involve de facto detention due to the fiction of non-entry are – even when applied to comparatively modest number of cases. Hence, we urge the EU co-legislators to abolish the rules on border procedures and to dispense with screening, i.e. the pre-selection of people seeking protection, when reforming the Common European Asylum System” says Wiebke Judith, legal policy officer at PRO ASYL and author of the study.