Staff Interview: “NGO advocacy is a marathon, not a sprint:” Interview with ECRE Head of International Advocacy Josephine Liebl 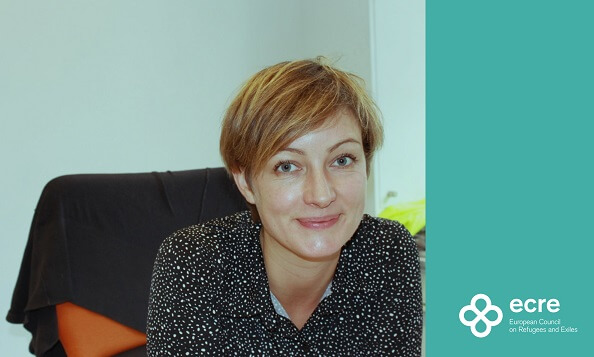 ECRE’s Advocacy team seeks to influence government policy and practice affecting refugee rights in Europe as well as European external action that impacts refugee rights outside Europe. It targets policy-makers in Brussels and in Member State capitals with tailored analysis and recommendations for change which are presented in the form of Policy Notes or Policy Papers. ECRE focuses on both developing alternatives to the status quo and on countering proposals which do not respect the rights of refugees.

ECRE’s positions are discussed in bilateral meetings and public events, and are taken forward via our communication channels. ECRE promotes the inclusion of refugee advocates and refugee-led organisations in all of its advocacy through their direct participation in workshops and events and their contribution to the development of ECRE’s policy positions as members of ECRE.

The policy areas ECRE works on currently are European external policies, including the accession process, development policy, cooperation with third countries on migration and return, resettlement and other safe and legal routes for refugees, the EU’s funding for refugee rights with a focus on the EU’s post- 2021 budget, refugee inclusion, and the rights of refugee children.

Rights of people seeking asylum and refugees are under threat in Europe and values which until recently were considered an integral part of the European political consensus are being questioned. Politicians are demonizing refugees and migrants and governments across Europe are implementing policies that restrict refugees’ rights, isolate them and keep them in a precarious situation legally, economically and emotionally. It has gone so far that government ministers are openly announcing that they want to end access to asylum in Europe, which goes hand in hand with the constant recycling of proposals for externalizing Europe’s responsibility to provide protection in spite of their obvious moral, legal and practical flaws.

For a refugee rights organization like ECRE this means that instead of arguing for an advancement of refugee rights, we often find ourselves defending the status quo to avoid a further deterioration of the situation. In short, we are trying to do damage limitation. Given the plethora of policy proposals that are spewed out by national governments and EU institutions, we assess which discussions to engage in and where our response may actually keep ideas or proposals alive longer than they would otherwise.

Civil society activism, of which NGO advocacy is one part, is a marathon, not a sprint. Irrespective of how outrageous some of the positions and proposals are that we have to consider, analyse and fight against, throwing our hands up in despair will not help us. Instead, ECRE puts forward our position, based on rigorous analysis and facts, and makes it heard by the relevant policy-makers. We always propose alternatives to demonstrate that it is entirely possible to make political choices that respect the rights of refugees. What is lacking is not proposed solutions but a willingness to consider and engage with them.

We need to keep at it and ensure that ECRE, which is focused on European policy and the EU, contributes most effectively to a change in rhetoric, policy and practice. One key element of this is the involvement of refugee advocates in our work. Across Europe, refugees are organising themselves and are rightly claiming to have a say in discussions that affect them. ‘Nothing about us without us’ has been a longstanding call of emancipation movements and is being used in the refugee context as well. A more systematic involvement of refugees in formulation of policy and advocacy work will not only result in better-informed positions but should hopefully also change the way policy-makers and politicians discuss and decide in this area. At ECRE we are reflecting this by involving refugee advocates and refugee-led organisations in the way we develop and carry out our advocacy work.

It is difficult to ascribe a change in policy or practice to the work of one single organisation. This is even more the case for EU policy-making given the constant negotiation that precedes any decision and the number of actors in different institutions and countries you need to bring on board. Influencing European policy is always a question of building alliances and working cooperatively and of course, ECRE is playing a part in this.

If you look at the current asylum acquis, you can trace the influence ECRE has had. Examples include procedural safeguards in the different legislative instruments; vulnerability assessments which require Member States to assess whether asylum seekers have specific needs; or suspensive effect of appeals. Within the different generations of Dublin regulations, we also see a development from what used to be considered as an almost exclusive inter-state system to a legislative framework that provides rights for individual applicants. With this and the rest of the asylum acquis, some of the most important progress for the rights of people seeking asylum and refugees comes from litigation and the impact that certain CJEU and ECtHR judgments had is of course very significant. This is why ECRE is working across the arc of legal and policy analysis, advocacy and influencing, and support to litigation to advance the rights of asylum seekers and refugees as holistically as possible.

The elections for the European Parliament (EP) on 26th May 2019 will have a severe impact on the future of EU asylum and migration policy. Never has migration and asylum played a more prominent role in European political discourse and never has the risk of large electoral gains for far-right and anti-EU political parties been so real. To counter these trends, concerted efforts are needed to influence political party programmes, intervene in public debates and mobilise progressive voters. ECRE is planning to play a part in all of these areas.

Anti-EU and extreme right forces have made strong showings in recent elections and the next EP elections are likely to reflect that trend. A lot will depend on whether moderate and progressive voters can be mobilised to vote in the elections as it is far-right and anti-EU groups that gain from low voter turn-out. At the last European elections, voter turnout was only 42.6 percent, the lowest it has been since 1979 when it was first directly elected. Right-wing populist parties increased their vote share from around 15% in 2009 to 20% in 2014.

Ensuring that political party programmes do not undermine refugee rights and instead promote a rights based approach to migration is a priority for ECRE and we are pursuing this actively. We are also encouraging our member organisations to do the same at the national level and to meet with MEP candidates to communicate support for or concerns about their party’s positioning on asylum and migration policies in order to make clear that constituents expect them to take a rights based position.

The most promising avenue to prevent a further right-wing shift in the next EP is to mobilize progressive voters, including supporters of ECRE and our member organisations to vote in the election. This is of particular importance where potential voters have to register to participate in the elections or where refugees who have been granted citizenship may not consider voting in the elections. We are reaching out to refugee led organisations and community groups across Europe to encourage them to vote. ECRE’s approach is non-partisan: it is not proposing which party to vote for or campaigning for particular parties at European or national level. Its objectives are rather to inform people of the importance of the European Parliament for the rights of refugees; providing information on the importance of the composition of the Parliament and the risk of increased extreme right MEPs; and encouraging those supportive of refugee rights to vote.

As part of our campaign, we are asking people seeking asylum and refugees in Europe whose lives will be impacted by decisions taken by the European Parliament what kind of Europe they would be voting for if they had the right to vote. Using our communication channels to give voice to those who are often talked about but rarely listened to is a key part of the campaign.