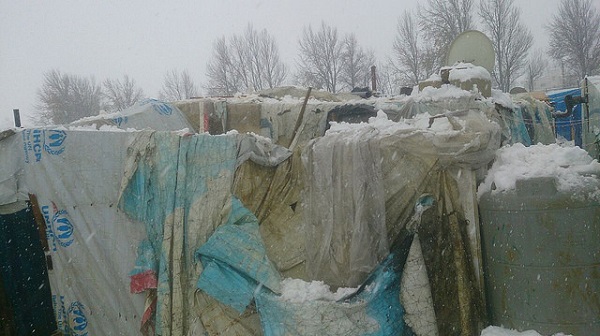 According to Norwegian Refugee Council (NRC) estimates, 70,000 refugees are currently at risk after heavy snow and floods have hit Lebanon. More than half of those deemed at risk are children. Last week, storm “Norma” caused damage to infrastructure, roads and homes across the country, with at least 850 refugee settlements at risk. At least one Syrian refugee child has died due to the conditions.

Lebanon has the largest per capita population of refugees in the world and currently hosts nearly 1.5 million Syrian refugees, 17% live in informal tented settlements. NRC reports that the adverse winter conditions has had a bigger impact on the lives of refugees this year as 2018 saw a sizable number of families moving to tented and substandard structures across the country.

According to a recent vulnerability assessment conducted by UN agencies, about 40 % of the tents in these settlements are in dangerous or below acceptable conditions. Since the arrrival of Syrian refugees, NGOs have been providing water, sanitation and hygiene efforts in the camps which lack adequate infrastructure. In May 2018, United Nations and aid agencies warned of a “critical gap” in funding for Syrian refugees and host communities, including Lebabon, which could lead to cuts in vital services, threatening social stability in host countries and refugees’ futures.

In response to the recent storms, in coordination with Lebanese authorities, UNHCR and NGO partners sent teams out to assess the damage and distribute emergency relief items including new mattresses and blankets to the worst-affected. However, some Syrians in Lebanon say more needs to be done by the government to improve living conditions.

The Lebanese goverment does not allow permenant setttlement for Syrian refugees and has called on Syrians to return to their home country. Local organsiations SAWA for Development and Aid director Rouba Mhaissen, stated; “The misery is increasing in the camps, because the aid is decreasing. Even though the war has diminished in intensity, still the refugees can’t go back because they have other concerns”- including fears of inscription, lack of habitiation, and political vengeance.