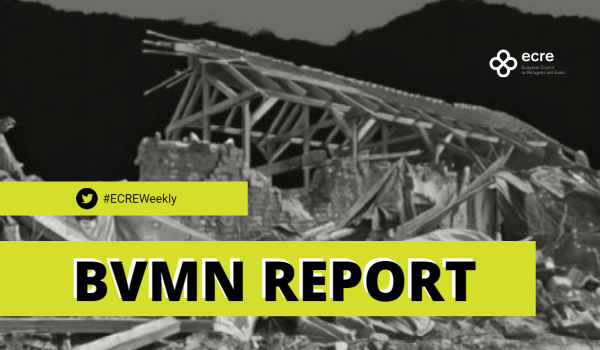 In July, BVMN was informed of pushbacks at the borders from Croatia to Bosnia-Herzegovina (BiH), Slovenia to Croatia, North Macedonia to Greece. Many respondents report violence and theft during the pushbacks. A complaint has been lodged with the UN Committee on the Rights of the Child over the chain-pushbacks of a Rohingya child between Slovenia, Croatia and BiH. At the North Macedonia border, respondents frequently identified Frontex officers on site and Czech officers collaborating with Macedonian officers.

On 15 July, Forensic Architecture launched its platform documenting drift backs in the Aegean Sea – the use of the currents and the geography of the Aegean Sea by authorities to expel POM back to Turkiye, by abandoning them on life rafts with no engine. They do so if deemed needed by resorting to violence. The platform currently has over 1,000 documented drift backs since 2020, including 26 cases of persons thrown directly into the sea and 122 cases of alleged Frontex involvement.

BVMN also report police interventions in refugee camps. In Serbia, the police launched a raid against an abandoned farm used by asylum seekers, including children, close to the northern border. The POM were forcibly removed from the border and their makeshift shelters destroyed. In Greece, the Athens municipal council is attempting to evacuate one of the last urban camps left in the country. Residents of Eleonas camp oppose this decision as they do not want to be relocated to the ‘closed controlled access centres’, favoured by Greek authorities and situated in remote locations and with heavy surveillance.

Further police operations were reported in targeted areas where NGO support is delivered. In Italy, due to the increase in arrivals in Trieste from the Balkan route and the overcrowded reception facilities, NGOs have been delivering assistance from the Libertà square close to the Trieste station. Given the high tourist activity in the city, police intervene on the square daily, ‘reaching the absurdity of giving [POM] fines for abusive camping’. In Greece, BVMN has raised concern over the continued police presence around their distribution site in Thessaloniki. The authorities are present at least once a week. They act when distribution activities are over to request proof of documentation from the migrants. The POM are then pushed back to Turkiye or placed in administrative detention. BVMN highlights that these police activities frighten migrants, making them too scared to come back for distributions, leading to further destitution.

Lastly, political context has led to forced deportations from BiH and Turkiye. Given the upcoming elections in June 2023, Turkiye has been deporting refugees and migrants in substantial numbers, with at least 20,000 Afghan nationals repatriated since January. BiH similarly operated its first deportation based on the readmission agreement with Pakistan on 31 July 2022, less than days after its entry into force on 23 July. Bosnian authorities have expressed intent to sign such agreements with several other countries including Afghanistan.