Editorial: Progress on the Pact: Not in our Name 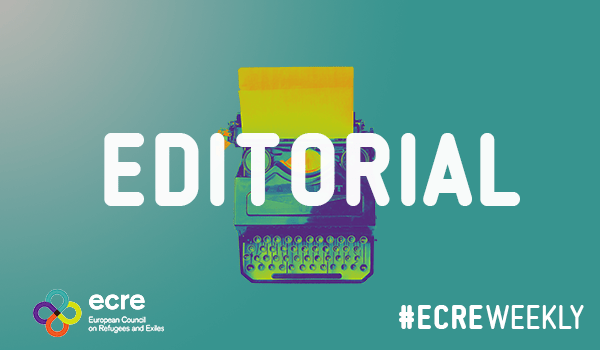 This week ECRE launches its detailed analysis of the legislative proposals accompanying the Pact on Migration and Asylum, while discussions in the Justice and Home Affairs Council lead one to question whether the proposals are going anywhere at all. The German Presidency concluded with a Presidency Progress Report which shows that even its limited ambitions were not reached. To be fair, the Presidency had one or two other issues to manage: as well as the COVID19 crisis, there was the row over the EU budget and the rule of law to sort out. Nonetheless, the scaled back ambition to reach a political agreement on the way forward on the Pact was set at the start of the Presidency, when these other challenges were well known. Its other objective was to make progress on at least one of the pending legislative files, starting with the proposal to transform EASO into the EU Asylum Agency.

That the Presidency concludes with a report in its name, rather than an agreement in the name of the Council, betrays the reignited conflicts on asylum, which the Pact has not alleviated and which also explain the lack of progress on the EASO file. The JHA Council discussions showed this lack of agreement on the proposals, and in particular in regard to the screening process and extended use of the border procedure.

ECRE has argued that the Pact should be seen as a form of deal between the Member States – solidarity in exchange for border containment – but doubted that the deal was really adequate to persuade the Member States at the borders to get on board. In the final version of the proposals, the solidarity piece does not offer enough and the – albeit watered down – border measures are still too much. In regard to the latter, Member States have doubts about the administrative burden that the measures will entail, as well as the political and practical challenges resulting from hosting detention centres at the borders, and doubts about the likely impact on the return rate. Four Member States, Greece, Italy, Malta and Spain prepared a joint letter setting out their concerns which were no doubt reiterated at the JHA; they are also blocking progress on the EASO file which remains a bargaining chip.

While ECRE’s analysis focuses on the fundamental rights impact of the proposals, it also highlights these same practical difficulties and the sheer complexity of the proposals. The first batch of detailed “ECRE Comments”, launched today, cover the Proposal for amendments to the Asylum Procedures Regulation including the asylum border procedure and the return border procedure (COM(2020) 211) and the Proposal for a Screening Regulation (COM(2020) 212). The Comments provide specific recommendations for amendments to the two legislative proposals, notwithstanding ECRE’s first recommendation that they be withdrawn. Each Comments paper is accompanied by a Policy Note, which summarises the main elements.

Exploring the content, it is clear how the proposals support above all the objective of containing people at the borders, often framed as ending “secondary movement”, i.e. onward movement from one EU Member State to another. Again, this tips the balance in favour of certain Member States – those prioritising the “battle” against “secondary movement – and away from others. Another central objective of the Pact is increasing deportation numbers, seen – rightly or wrongly (in ECRE’s view wrongly) – as the key to making asylum function in Europe, but even after examining the detail of these two proposals it is not clear how that will actually be achieved. Both proposals will lead to near automatic detention but absconding is not the reason for the low effective return rates.

An aspect that has received less attention is the extent to which all the procedural changes are likely to strip people of protection when they need it. Read in conjunction with 2016 APR, most of which is preserved, the proposed amendments create a complex set of sub-standard procedures, which will apply to a large number of people seeking asylum, with a range of different grounds used to channel them into these procedures rather than the “regular” procedure. New procedures, newly mandatory procedures or more widely applied procedures are variously lower quality because of their shorter time limits; because of their geographic location; because they take place in detention not in open reception; because they are stripped of procedural guarantees; because they allow for circumvention of assessments on the merits; or because they limit the possible protection statuses that might be awarded. Or some combination of the above.

We are reminded that an underlying unstated objective is that fewer people receive protection in Europe – and all the evidence on the functioning of asylum systems shows that this will certainly be the result should these procedural changes be adopted. The currently erroneous assertion that most people seeking protection in Europe do not have protection needs thus becomes a self-fulfilling prophecy. It is rendered true by changing the rules of the game so that legal processes lead to fewer protection decisions. The lower protection rates can then be used to justify restrictive measures, in the same way that the EU-Turkey Deal lowers protection rates by trapping refugees in Turkey and the lower protection rates are then used to justify restrictive measures on the basis that a lower percentage of those arriving are refugees.

Changing procedural rules does not of course mean that fewer people have protection needs; it means that these needs will not be recognised. The motivating factor is often the tenuous belief that lots of people are gaming the system. It is similar to the pull factor argument in that it has a grip on the political imagination that cannot be prised off; yet there is no evidence for it. On the contrary, the system is stacked against the applicant who has to deal with complex law often without adequate information or adequate legal assistance and representation.

These measures may generate more problems than they solve: by reducing the prospects for status while returning people remains a major challenge just adds to the people left in limbo in Europe. While mainly dealt with in the proposed Qualification Directive, as ECRE’s Comments highlight, one of the changes to the APR is to remove from Member States the discretion to use these statuses in the border procedure. When the reality of contemporary forced displacement is that many people have protection needs stemming from a variety of causes, some of which are not covered by the persecution grounds in the ’51 Convention or the later provisions on conflict, it is unfair and unwise to make procedural changes that mean fewer people will be granted protection. Given the complexity of many of these cases, reducing time limits is also unwise. Many of these considerations are of course shaping the opposition of the Member States likely to be most affected.

Unfortunately, the JHA Council shows that again the main point of agreement for the Member States is on outsourcing responsibilities to other regions, with many proposals featuring in the Presidency report. As ECRE commented, vigilance is needed to avoid EU foreign relations being fatally undermined by these efforts, especially given recent antics at the European Parliament which led to it for the first time endorsing migration control conditionality in EU funding (although this was largely due to underhand tactics rather being representative of Parliament’s views). ECRE has published the latest in its series of analyses from African civil society examining the impact of these policies, with experts from two countries that are fully in the headlights, Morocco and The Gambia, providing their assessment. And although the agreement on these measures is wide, in that it covers all Member States, it is not necessarily deep, because there are enough policy-makers, diplomats, and officials across other policy areas in the Institutions and ministries who remain sceptical.

On the procedural and screening elements, ECRE highlights its fundamental rights concerns and Member States’ objections centre on the disadvantages to them of the changes. But there is common concern over the complexity and difficulty in implementation, leading to costs and inefficiencies. The conclusion of the German Presidency indicates that the legislative proposals may be going nowhere fast. For ECRE, this means focusing on compliance with the laws in place for as long as they remain, as well as progress on supporting and flanking measures such as tackling the attack on the rule of law, supporting inclusion, and safe and legal pathways to protection. As underlined yet again this week by the Court of Justice of the EU in more seminal judgments against Hungary and Poland – while Member States may not agree on the way forward, in the meantime they should not be allowed to keep going backwards when it comes to fundamental rights.