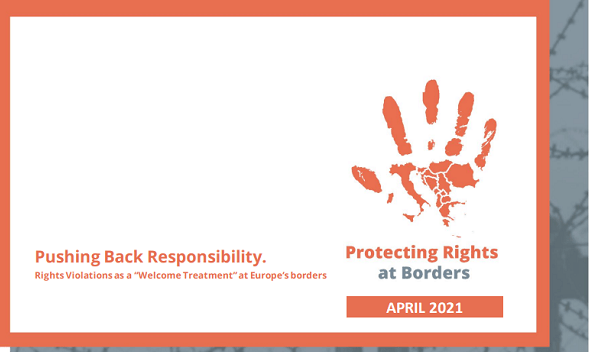 In the report “Pushing Back Responsibility. Rights Violations as a “Welcome Treatment” at Europe’s borders”, Protecting Rights at Borders (PRAB) has collected testimonies of 2,162 cases of pushbacks, including chain pushbacks over multiple countries. The report covers rights violations at borders in Italy, Greece, Serbia, Bosnia and Herzegovina, North Macedonia, and Hungary.

Based on an extensive collection of testimonies from the Central Mediterranean and Western Balkan routes, as well as at the EU’s internal borders, the report concludes that: “Pushbacks continue to be systematically used by EU Member States and neighboring countries…” and “can be considered a de-facto tool for border management by some countries”.

Of the total of 2,162 pushbacks recorded by PRAB partners between January and April 2021, 176 involved chain pushbacks. 24% of the cases involved physical abuse and assault, 27% involved theft, extortion and destruction of property, at the hands of national border police and law enforcement officials. 13% of pushback cases involved children.

In order to re-establish trust and monitor human rights violations the report recommends the establishment of national independent mechanisms to start investigations once evidence is collected by the mechanism or is referred to it: “This would be a tool to hold perpetrators accountable, end impunity and ensure access to justice”.

The report further notes that pushbacks should be seen in the wider context of: “an overall trend, a so-called race to the bottom, with regards to respect for the fundamental rights of migrants, asylum seekers and refugees. While governments – deliberately – do not respect and often directly violate migrants’, refugees’ and asylum seekers’ rights under human rights law, humanitarian organisations are often prevented from providing assistance in line with their humanitarian mandates.